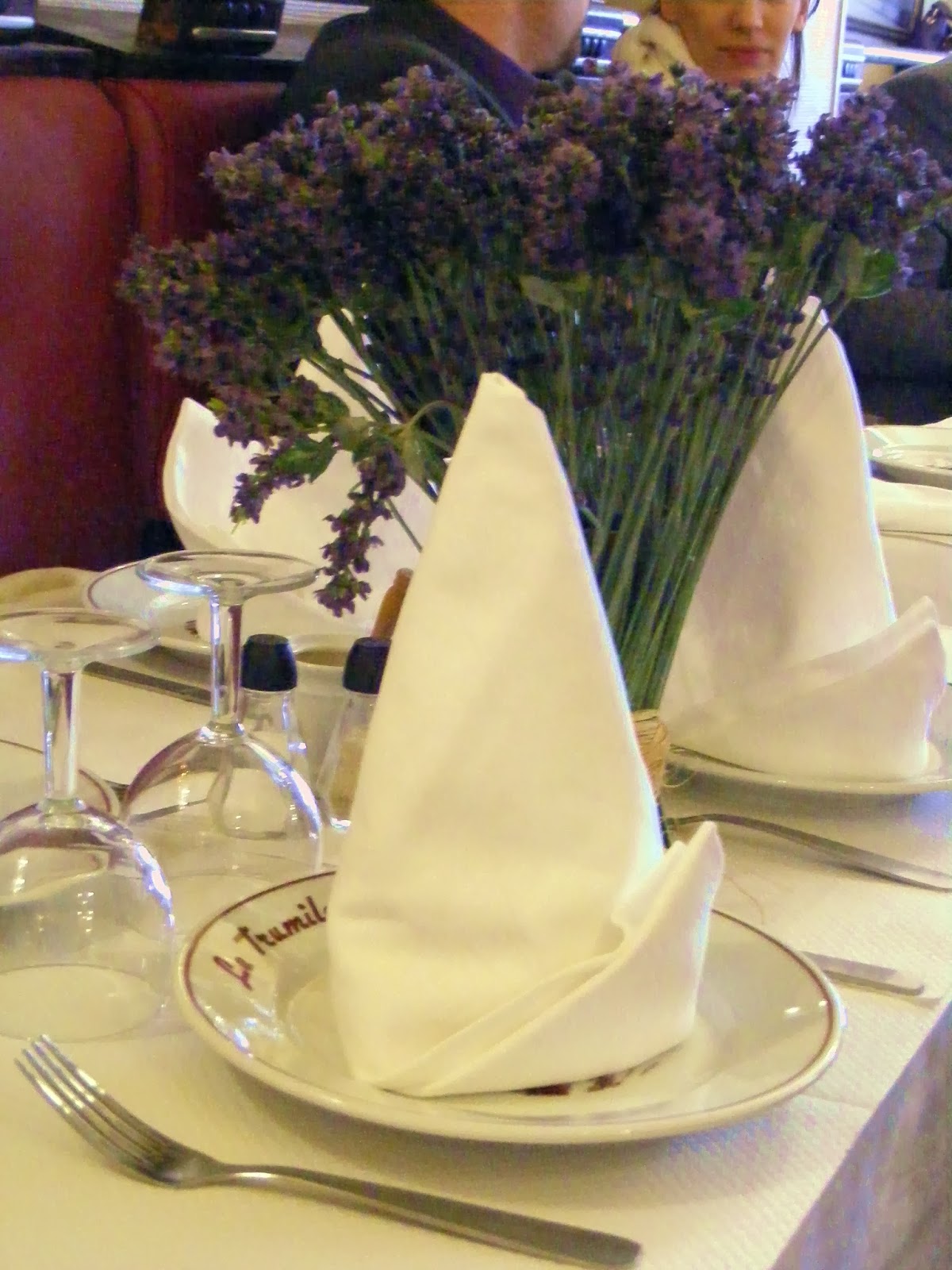 Paris - and France in general - has changed a lot since I first landed in 1968.  If I delve back to the misty memories I have of a childhood trip with my parents in 1958, the changes are even more mind-boggling.
I’ve said elsewhere, and maybe even here, that I got off the plane at Orly (there was no Roissy-Charles de Gaulle Airport then) having time-traveled twenty years into the past.  Television had only two channels and programs didn’t run all day long.  Channel 2 (Antenne 2) - created only the day before (in 1964) - started and signed off around midnight with an animation of seven flying men in blue coats, images by famous Belgian artist Jean-Michel Folon.
But the changes between France and the U.S. weren’t limited to television.  Now you can get a phone line overnight, instead of waiting up to two years for one as was the norm back then.  And the little blue local telegrams (pneumatiques) that stood in for phone calls have disappeared.  Almost all the Métro lines have been extended beyond the city limits and into the banlieues rouges, the working class suburbs ringing Paris, which aren’t so working class anymore.  And long gone are the days when schoolboys went to class in short pants and the ceremony of the first pair of long pants was a rite of passage to adulthood tantamount to the African circumcision ceremonies - but far more merciful.
In the transition years during which France caught up and sometimes sped past America, the French went over to using cellphones long before Americans did.  Most phone plans nowadays include free overseas calls, which I’d love to see Stateside.  And Paris is totally cabled in optic fiber now, which can’t be said of many American cities.  Where technology is involved, France is no slouch.
Those are just a few of the changes that spring to mind.


One thing that has changed less is French gastronomy.  But even there, the camel has his nose under the tent.  With women working in two-paycheck families, frozen foods have made enormous inroads.  Hamburgers can be found anywhere, not just at the now-disappeared WimpyBurger, a British fast-food joint that broke France's Burger Barrier in the late Sixties.  And Mickey D (here known as McDoh) is present in pretty much every corner of France, including the far-flung ones.  Even coffee isn’t safe from Yankee invasion, with Starbucks giving the old French café a run for its money, although why you’d want to drink an American cup of java in France surpasses my mental capabilities, but then I’m a tea drinker anyway, so...
Earlier today I was watching “Jacques and Julia”, the PBS cooking show that married Julia Child with Jacques Pépin for a series of fights about black pepper vs white and the use of garlic or not.  The theme of the day was steaks, and they made five sorts.  (Well, four actually because the hamburger was the fifth.)  Their recipes included the classic steak Diane, steak au poivre (pepper steak) and steak Bistro.  It reminded me of what I came to consider Fast Food, French Style. 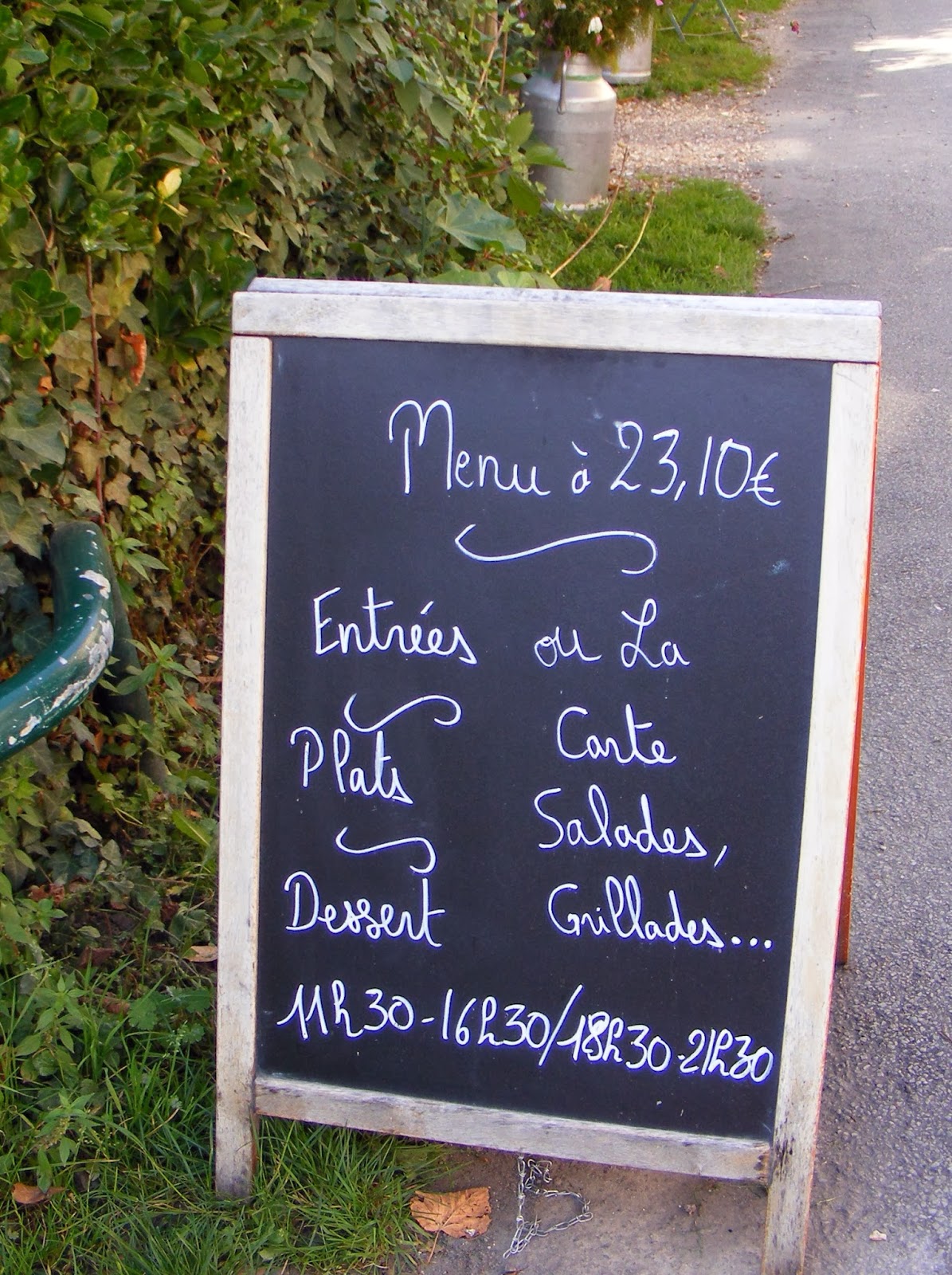 The thing you could get in the blink of an eye in any café offering food was a steak-frites, a steak pan-browned in butter with a plateful of French fries that were some of the crispiest I’d ever had, sprinkled with the best salt I’d ever tasted.   It came too raw/rare for my taste, so I ate around the edges and left the center.  (Over time, I moved from eating my steaks brown inside to pink and then to somewhat red.)  The meat was tougher than I was used to in the States but perhaps more flavorful.  Years later I would take some Americans on a tour of France, ending in the Massif Central where they were treated to what may be the best-tasting breed of steak in the country:  the Salers.  They found it good but “chewy”, which echoed my own feelings decades before.
In addition to the steak-frites, every brasserie - and even some cafés - offered a Blue Plate Special, a plat du jour, or dish of the day.  Usually it was something that could simmer on a back burner throughout the lunch rush without cooking down to mush and so be served up in a heartbeat, such as a boeuf bourguignon or pot au feu (both types of beef stew) or a hachis parmentier (shepherd’s pie) or a poulet basquaise (chicken with tomatoes and bell peppers).  For the fish-eaters, there was often (especially on Fridays) a brandade de morue - a type of shepherd’s pie with salt cod replacing the ground beef.  You could also choose something that could be quickly grilled (not enough to the American palate - see above), such as liver with onions or some kind of sausage.  And of course there was - and still is - the French version of the good old grilled cheese sandwich with ham, the croque-monsieur ... or croque-madame if you wanted a fried egg on the top.  Maybe an omelette, with or without cheese, mushrooms, ham... or all of the above.  And let’s not forget the salad that has since become popular in trendy American restaurants:  the salade niçoise, a summer treat that crowns its greenery with boiled potatoes, tuna, black olives, cherry tomatoes, and a smattering of green beans plus two or three anchovies artistically arranged on the top.
All this to say that you don’t have to take two hours for a meal in France.  You can get delicious fast food, French style.  So eat your heart out, McDonald’s!  This is a whole other ball game.