Who Are the People in Your Neighborhood: Jacky Gaudin 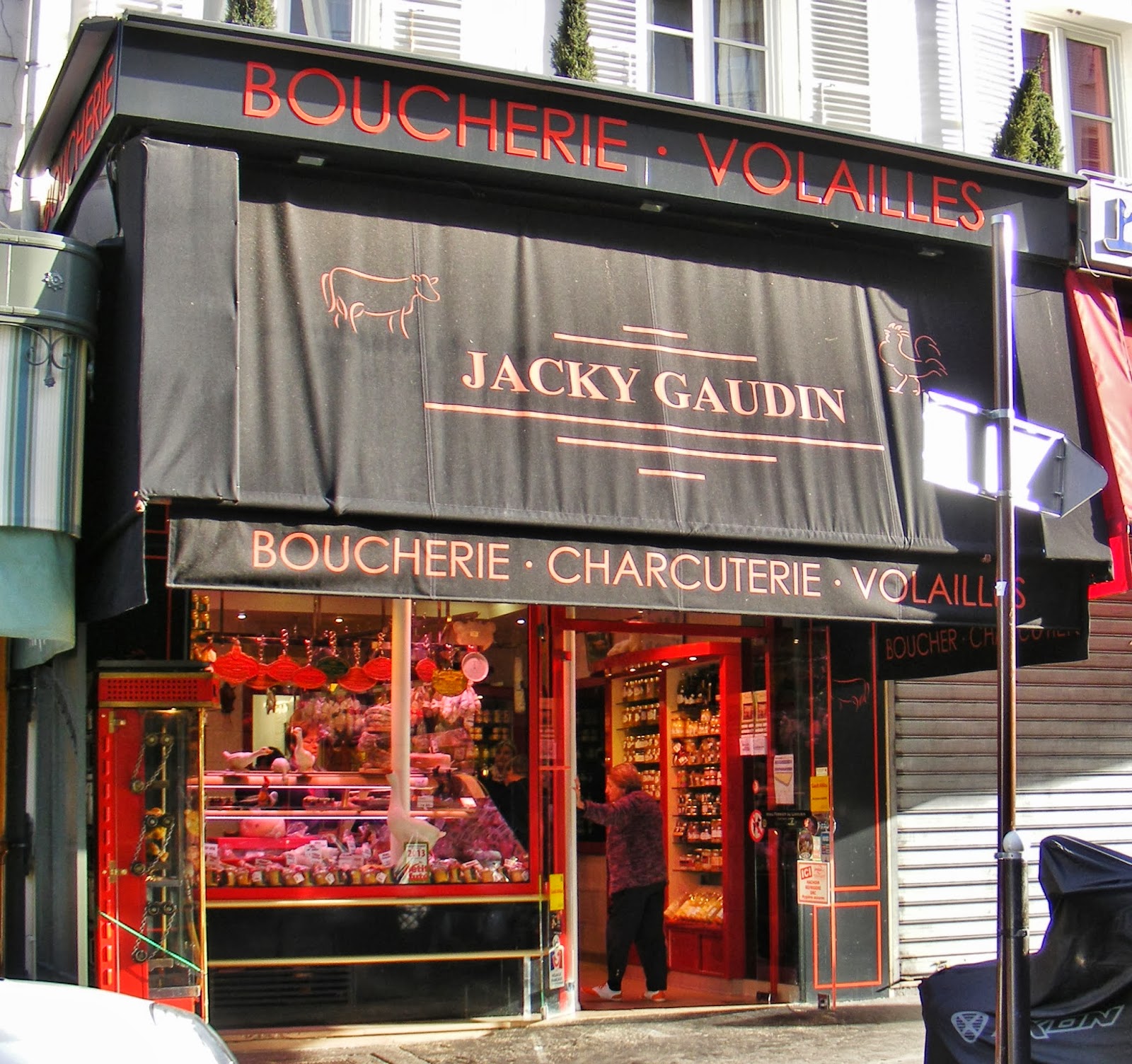 There used to be lots of butcher shops in my neighborhood.  Why, there were four on the block where I used to live - if you walked around all four sides - including a boucherie chevaline, which is a butcher who sells only horsemeat.  (I know, it sounds barbaric, but it tastes like a steak, only sweeter, and I only ever ate one.  You can hardly find them anymore, although you do still see the old gilded horsehead over a few shop doors that now sell clothes or jewelry or other inedible objects.)
Today butcher shops are fewer and farther between.  The main blame can be put squarely on supermarkets.  Even the food-picky French like one-stop shopping, and they seem to be willing to settle for lesser quality nowadays... especially if it’s offset by a lower price.
I myself go to my local mini-supermarket for the staples:  sugar, flour, napkins, juice...  But not for my meat.  I guess I’m just a stickler for taste and freshness.

On the rue Lepic, my former butcher - Monsieur Bénard - is long gone, even though his sign is still there over the window of the food specialties shop where now you can buy as little as 10 grams of cumin seed, weighed out into a miniature cellophane sachet.  Farther down rue Lepic there’s a rotisserie specializing in poultry.  And then there’s the little lady who sells products from the Auvergne region, but she limits herself to boudin (blood sausage) and cold cuts.  The only real butcher on rue Lepic is a franchise outlet of Boucherie Roger with low prices and equally low quality.
Rue Lepic runs downhill from the once-food-resplendent rue des Abbesses, but now there’s only one butcher left on its entire length.  And that’s Jacky Gaudin, the self-proclaimed (and rightly so) roi des bouchers de Montmartre - the king of Montmartre’s butchers 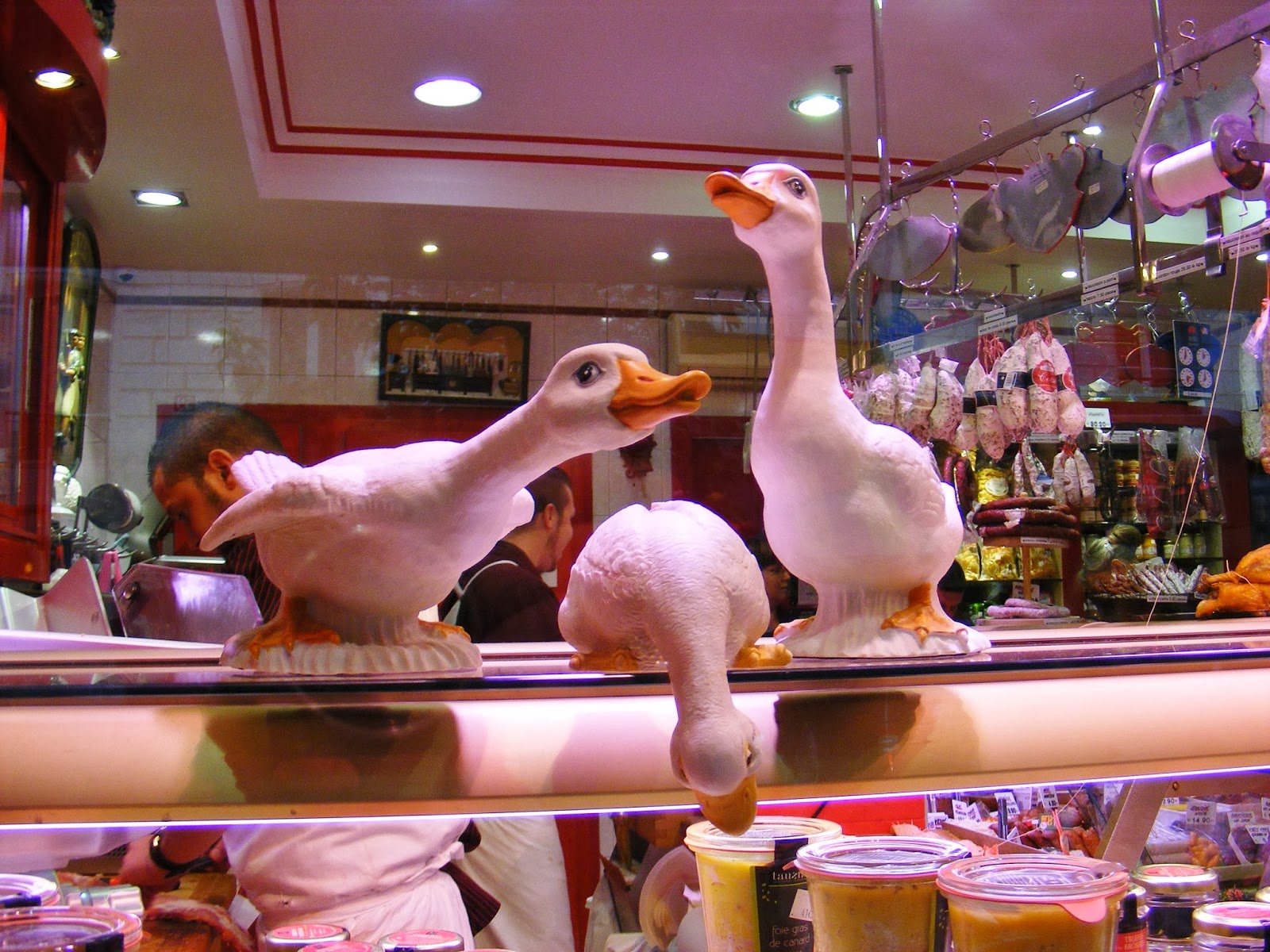 But Montmartre wasn’t always his home.  Gaudin moved to Paris from the Maine-et-Loire region well to the south, where he started his two-year apprenticeship at age 15.  When he earned his knives, he moved to the resort town of La Baule on the Atlantic coast and later on to Paris.  He explains that in those days you were told you absolutely had to go to the capital to learn all the different cuts of meat, but adds that that’s no longer the case.
So to Paris he came.  And of all the shops on the market that he could have bought, this one on the sunny side of the rue des Abbesses in Montmartre looked like it was the best location.  The most promising.  And judging by the line outside his door, he made the right choice.

Of course, the quality of his goods and services has a lot to do with that.  And the accueil as well - the welcome you get when you cross his doorstep.  Take Marguerite for instance, one of his first-name-basis regulars who has just bought quite a lot of meat.  When she pays her 30€ bill all in coins, the staff teases, “You’ve been singing on street corners again.” 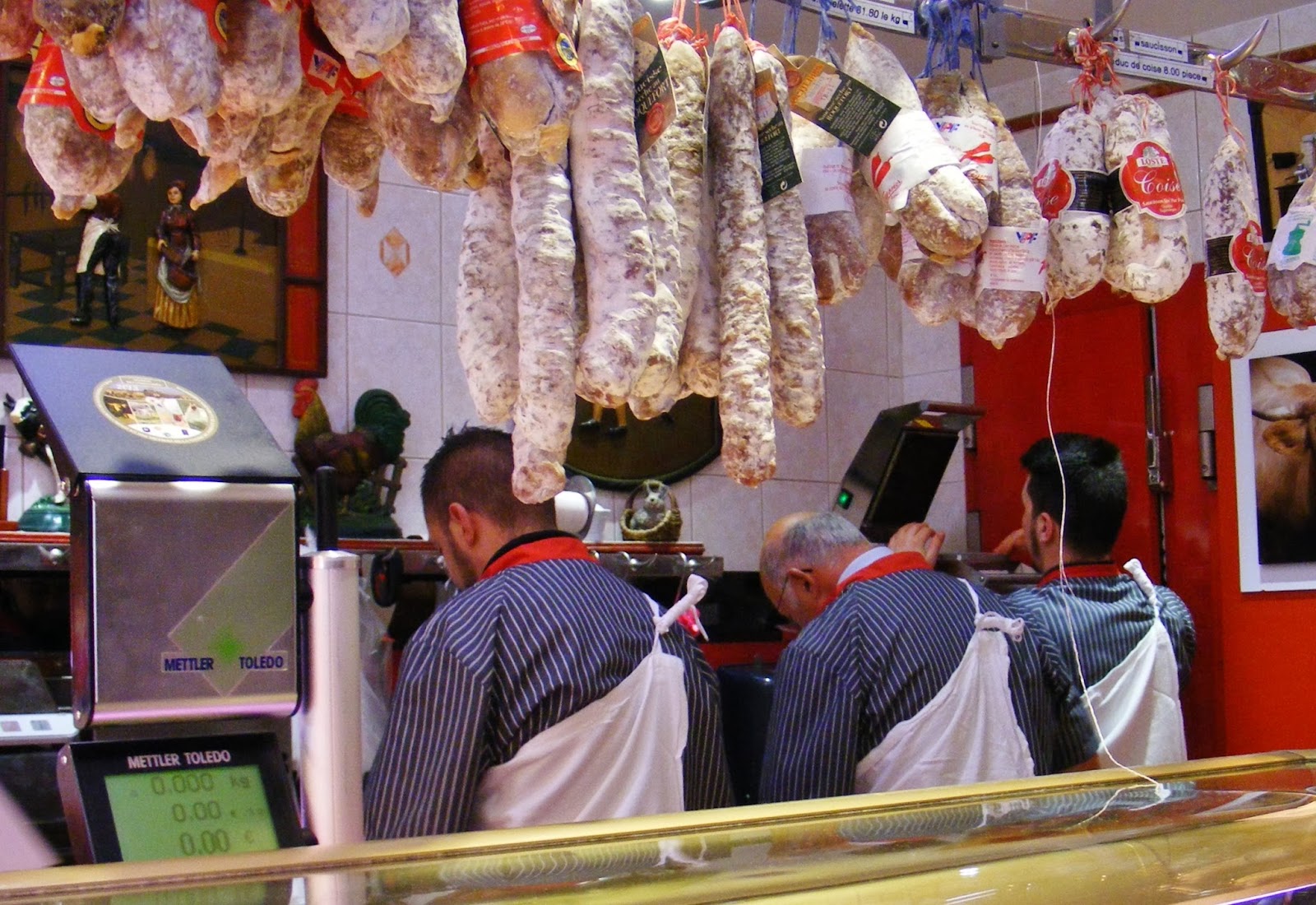 Still, no amount of joviality can make up for bad service or tough meat.  And you’ll find neither here.  Service is quick and professional, yet friendly.  When I ask how many people work there, Jacky looks around, counts on his fingers and says “seven”.  “Including you?” I ask.  “Eight and nine,” he corrects, with a smile, “with my wife and me.”  Mrs. Gaudin is behind the cash register every morning, the traditional position of trust in any French family business.   There’s another lady who takes over in the afternoons, and the rest of the staff are butchers, both young and old.  They can answer any meat-cooking question you throw at them, and even offer meal suggestions. 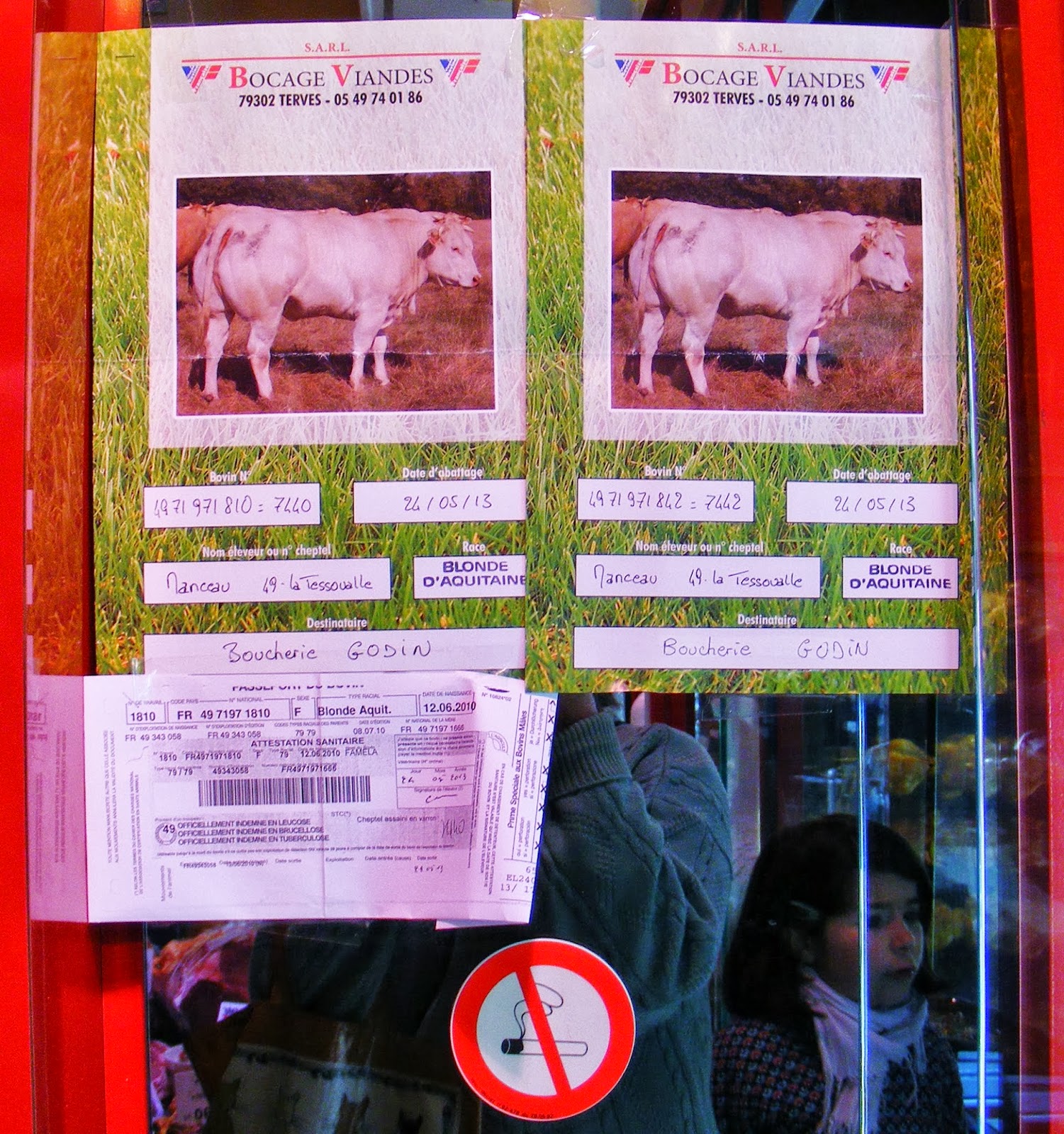 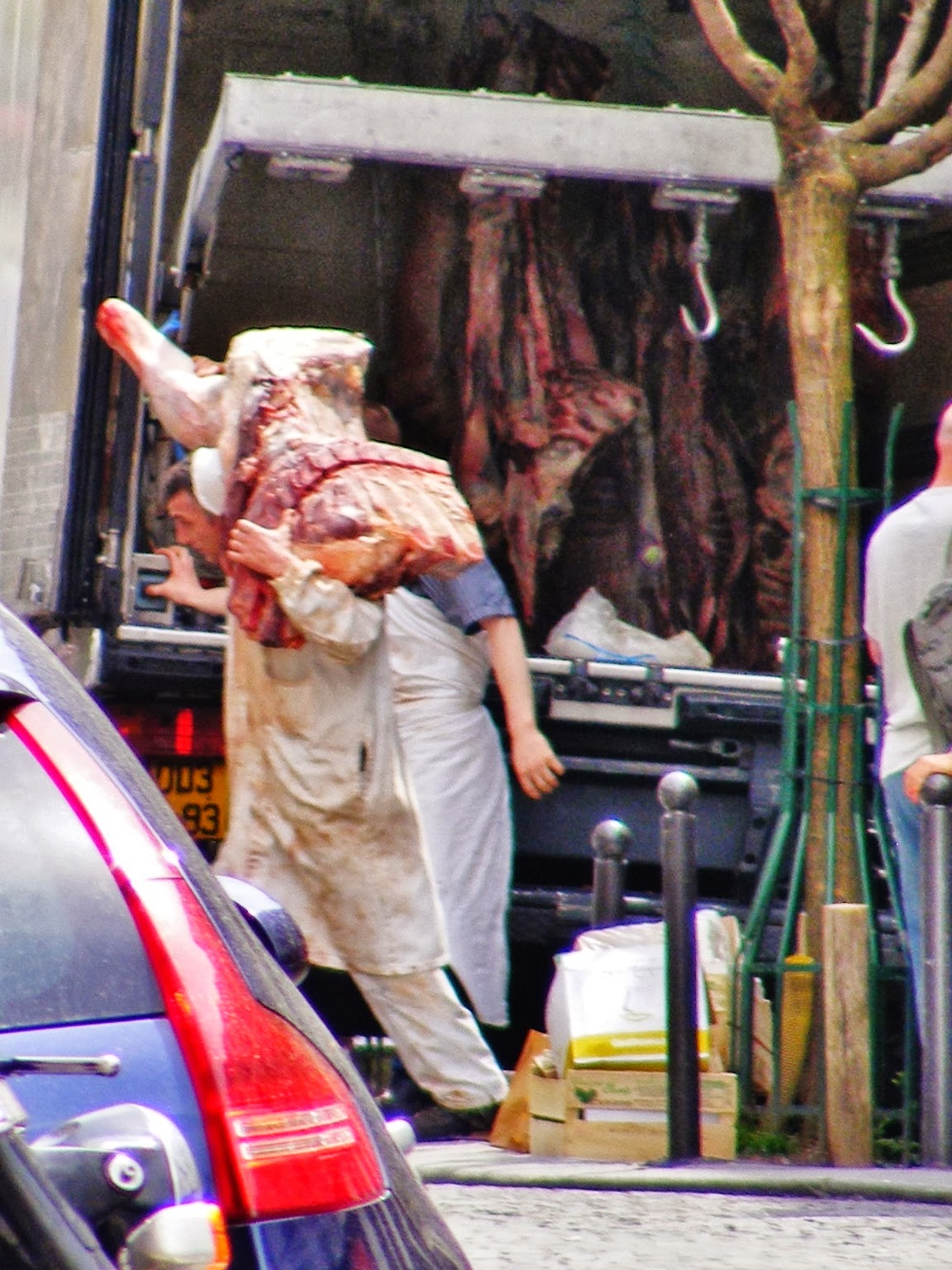 As for the goods, the meat is delivered on a daily basis.  Which isn’t surprising, given the number of different products on offer.  And as for the beef, well you can see a photo of it while it was still a cow - it’s right there on the wall, along with its ID number and the name and address of the farmer who raised the animal, the date of its demise, and even a copy of the “livestock passport” delivered by a state veterinarian to show it was free from disease.   The French seem to have adopted the old Russian proverb, “Trust, but verify”. 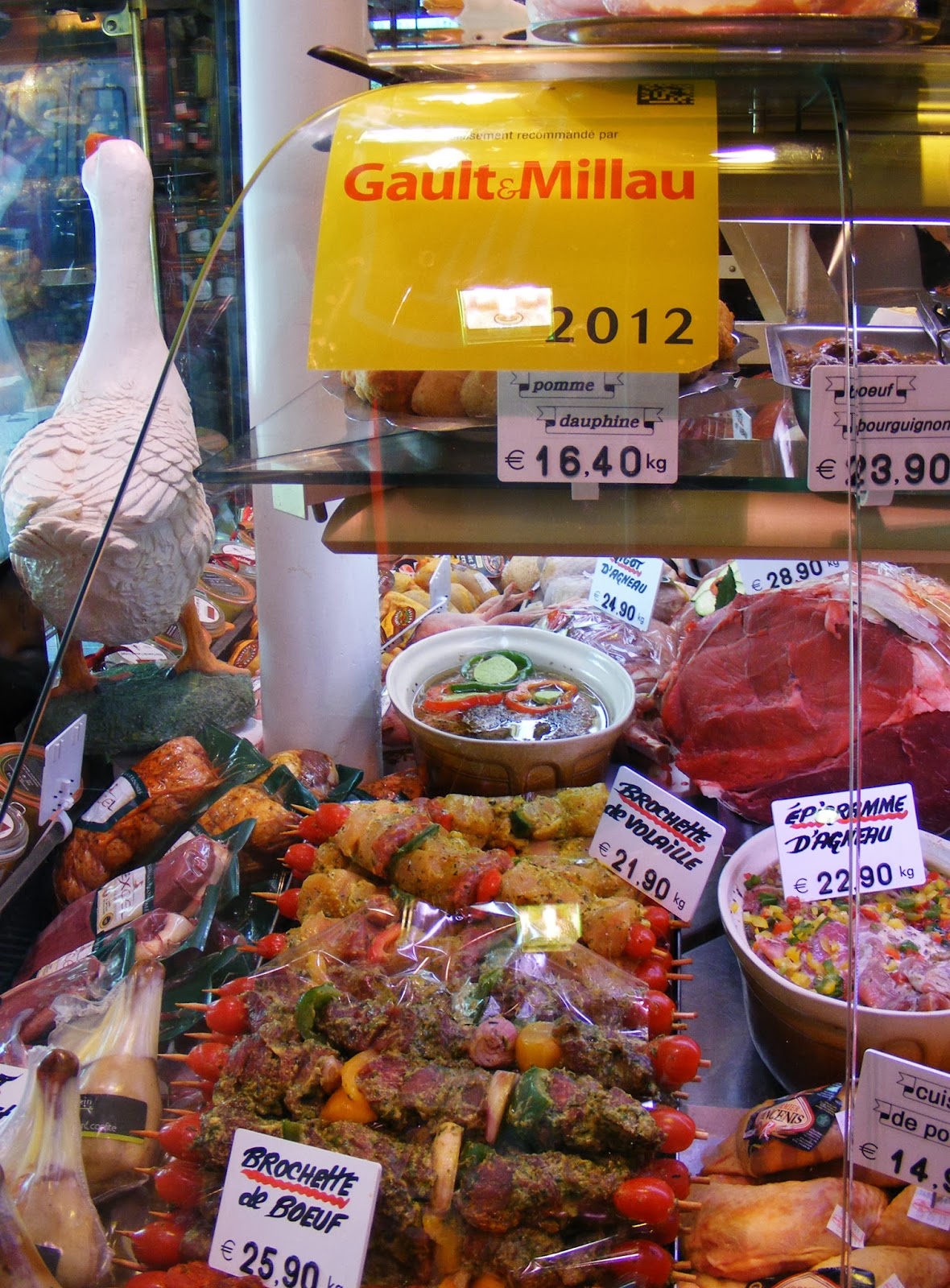 And part of the trust comes from the fact that much of the work is done before your very eyes.  While I wait in line, Jacky takes a huge long roast of beef, cuts off the amount the lady needs for her eight guests, lovingly swathes it in barde (strips of fat) to keep it moist during roasting and ties the whole thing up like a Christmas package.  Deeming it too heavy for his customer, he even comes around the counter and places it gingerly in her shopping caddy himself.  Try to get that at a supermarket!  Quite a show, and proof of his title: “king of Montmartre butchers”.
But his talents don’t end there.  Gaudin makes all the sausages himself.  The various pâtés come from an artisan he’s known for ages.  And there’s a wide selection of cold cuts from different places:  viande des grisons (air-dried beef) from Switzerland, lonzo (dry-cured pork fillet) from Corsica, Spanish chorizo and Danish salami, as well as Canadian-style bacon ready to fry up. 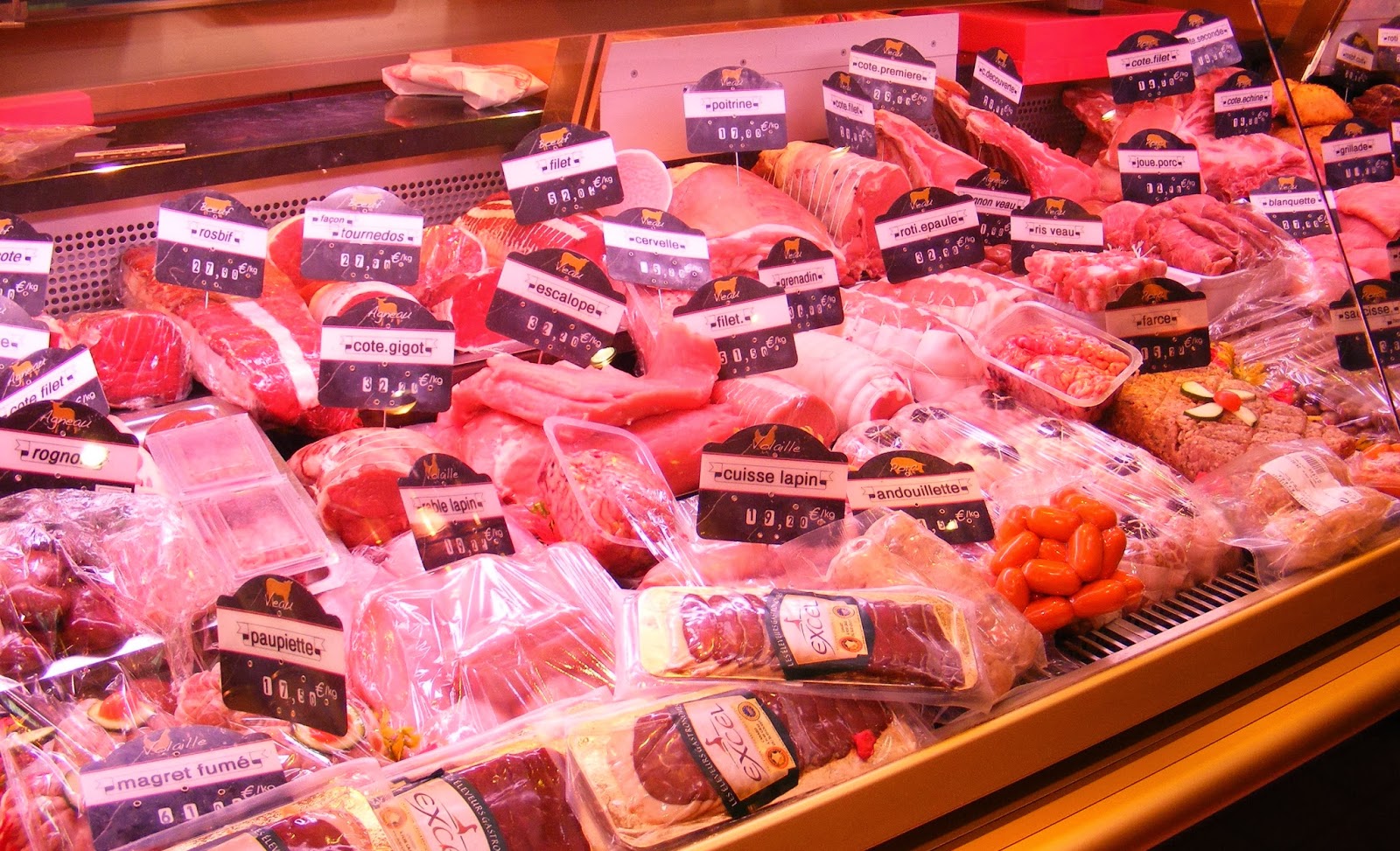 If you don’t feel much like cooking, Gaudin also prepares veal scallops milanaise (breaded) as well as veal cordon bleu, which is a thin scallop topped with a slice of ham and another of Swiss cheese, then folded over and breaded.  All you need to do with either is brown them in a little butter and you’re all set.  Perfect for a busy day.
Aside from all the different meats, you’ll also find accessories such as cooked sauerkraut (so you don’t have to spend hours and stink up the house), grated carrot salad, céleri remoulade (grated celery root with a zesty mayonnaise-y sauce) or taboule.  And don’t forget to pick up a half dozen tiny quail’s eggs; he has those, too!
I asked Jacky what he would have liked to be, if he hadn’t become a butcher.  His immediate answer:  “A blacksmith.”  He would have liked to work with farm equipment.  After all, his roots are in the countryside.
But I’m glad he changed his mind and moved to my neighborhood. 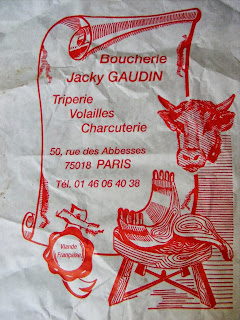