Out & About: Exhibits - Impressionists, in Private

It’s Sunday, and the sun is out and the wind isn’t, both of which are a welcome change.  There’s an opportunity here that needs to be seized.  So it’s carpe diem for me.
Now Me has seen a lot of Impressionist exhibits.  They usually include works on loan from other museums around the globe.  But this show is different.  These canvases come from private collections and may never have been in the same city or even the same country before, let alone the same room!
That room needs to include me.  So out comes the Métro pass - three different Métro lines, two changes, a bit under one hour - and I’m off.


Going to this small museum while others are enjoying Sunday dinner is a good idea.  And yet the guard still lets us in only in clusters so people will have room to enjoy the artwork.  At least the line is indoors.  As I wait near the head of it, my eyes are drawn to the very first painting, Voilier dans le port de Honfleur by Jongkind.  It will end up being my favorite, maybe because of the time I got to spend with it but also because of Jongkind’s mastery of light on water, which to my mind is one of the hardest things to get right in all of art. He also got the luminosity of the sky right.  Not to mention all those different shades of blue, even reflected in the sails, so I’ll be awarding him both ears and the tail.
As this museum was once a mansion, the art is hung throughout a series of rooms.  That’s very fitting because every one of the hundred-odd masterpieces - canvases, drawings, sculptures - came from private homes.  Fifty homes, to be exact, located around the world - in France, Switzerland, Italy, Great Britain, Mexico and the United States.
This show is intended to trace the evolution of Impressionism through works that haven’t been seen often, if at all.  And the show’s cast of artists is absolutely mind-boggling:  Corot, Boudin, Jongkind, Manet, Bazille, Monet, Renoir, Degas, Pissarro, Sisley, Caillebotte, Morisot, Guillaumin, Cézanne, Rodin, and even an American, Mary Cassatt, plus an Impressionist I haven’t heard of before, Eva Gonzalès.  Three women in all.  Not such a bad score for those stodgy old days.
The exhibit is chronological rather than organized by artist, although there’s some of that as well because of the dates.  The first room, the one with the Jongkind I enjoyed so much, focuses on what it calls the roots of Impressionism.  The newborn style can be seen in a few Corots, who was one of the precursors of Impressionism, as well as a Manet - The Bar at the Folies-Bergères.  And there are several works by Boudin, who inspired Monet so deeply.  Boudin concentrated his artistic skills on maritime scenes, and they range from an overcast view of The Port of Bordeaux - all in greys and browns - to the sunny pastel blues of The Beach at Bénerville.  There are also aquarelles of Three Breton Washerwomen, in various tones of grey, and of people on The Beach in Trouville, which looks like a draft for an oil I saw in another exhibit last year.  In fact there are several paintings that look familiar because artists often do several takes of the same subject, like Monet’s seafront in Normandy, a relative of which is hanging at the Musée d’Orsay.
As you walk through the rooms, Impressionism spreads its wings from these beginnings.  That’s especially clear with Cézanne’s works that morph from his low-key Geraniums in 1873 to his then-scandalous men stripping down for a skinny-dip in 1897.  All styles of Impressionism are covered here, all the way to Sisley, so there’s something for everyone.
Among all of it, two things stand out for me.  The first is Monet’s drawings.  That’s what brought him to Boudin’s attention, especially as they were done when he was only 17.  Half of them are just penciled sketches - many of women in traditional Norman dress - and the other half are caricatures.  Those are the ones I like the most.  They remind me of the political caricatures at the Musée d’Orsay done by Daumier.
The other wonderful reward is the number of works by one of my all-time favorites, Gustave Caillebotte.  At age 34, he gave up showing his artwork and concentrated on his garden and on building and racing sailboats, a fact I serendipidously learned on last week’s trip to visit my naval architect friend in southwest France.  Most Caillebotte paintings that I’ve seen elsewhere were street scenes of Paris.  It’s fascinating here to see him painting flowers instead - one of sunflowers (precursor of van Gogh?) and one of dahlias in a suburban garden, complete with a woman and her little dog, too, off there in the background... all dappled in shadows, as Monet after him would do.
The Marmottan’s write-up of the exhibit says there are about a dozen works by most every artist bridging his or her entire career.  It also says the museum saved the best for last.  But as I don’t enjoy Renoir very much, in spite of the fact that he once lived in the house at my corner in Montmartre, his paintings don’t “talk” to me.  Something about his excessive use of rosy pinks.  It’s interesting though to see them because they include a portrait of Renoir’s wife that has never been on exhibit before anywhere.  That alone makes it special.
Oh, and there are two sculptures also.  One of them - Degas’ Little Dancer - I thought was on loan from the Musée d’Orsay, but this must be her twin sister: same hands behind her back, toes out, eyes slit, chin jutting, little pointed nose in the air, all made more real by her tutu of tulle and an actual pink ribbon holding her bronze hair back.  The other sculpture is one of many terra cotta studies Rodin must have made of The Thinker before he cast the ones in bronze that sit outside both Rodin Museums, one in Paris and its brother in Philadelphia.
How amazing to see all these masterpieces gathered together in one place!  There are stories here, I’m sure, tales of people who saw these canvases and just had to have them, recognizing this new way of painting for what it was:  a personal view of the world, a view that spoke to them.

Aside from this ground floor exhibit, there are plenty of other things to see at the Marmottan.  Downstairs is their permanent collection of Impressionists (mainly Monet), except for the Berthe Morisots which are upstairs.  Also upstairs is the museum’s huge collection of enluminures.  Those enamored of Napoleon Bonaparte will enjoy the collection of art and furniture from the First Empire.  Something for everyone at this Little Museum That Could.  Yes, it’s off the beaten track.  But well worth the trip. 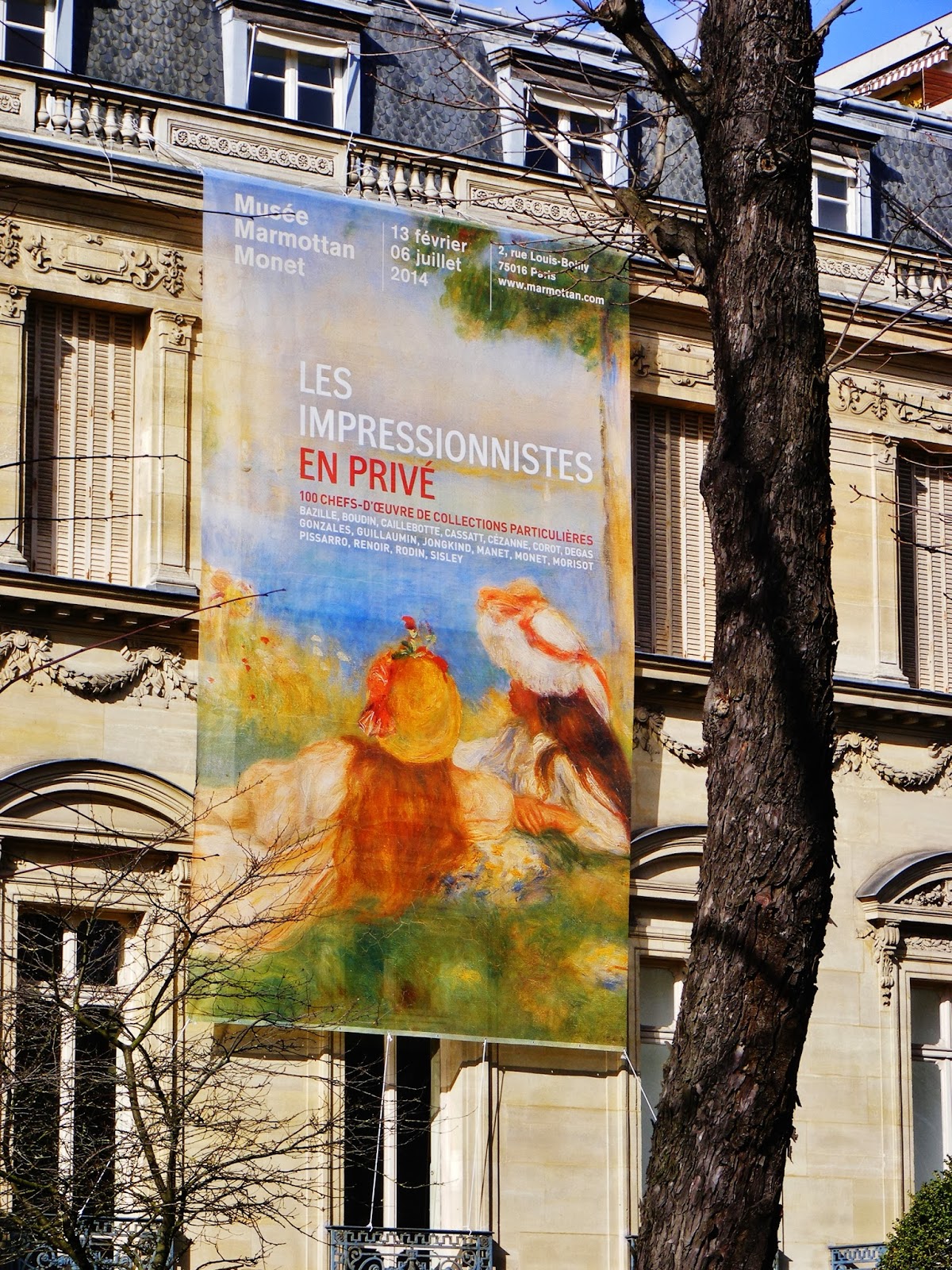