Out & About: Exhibits: Joséphine 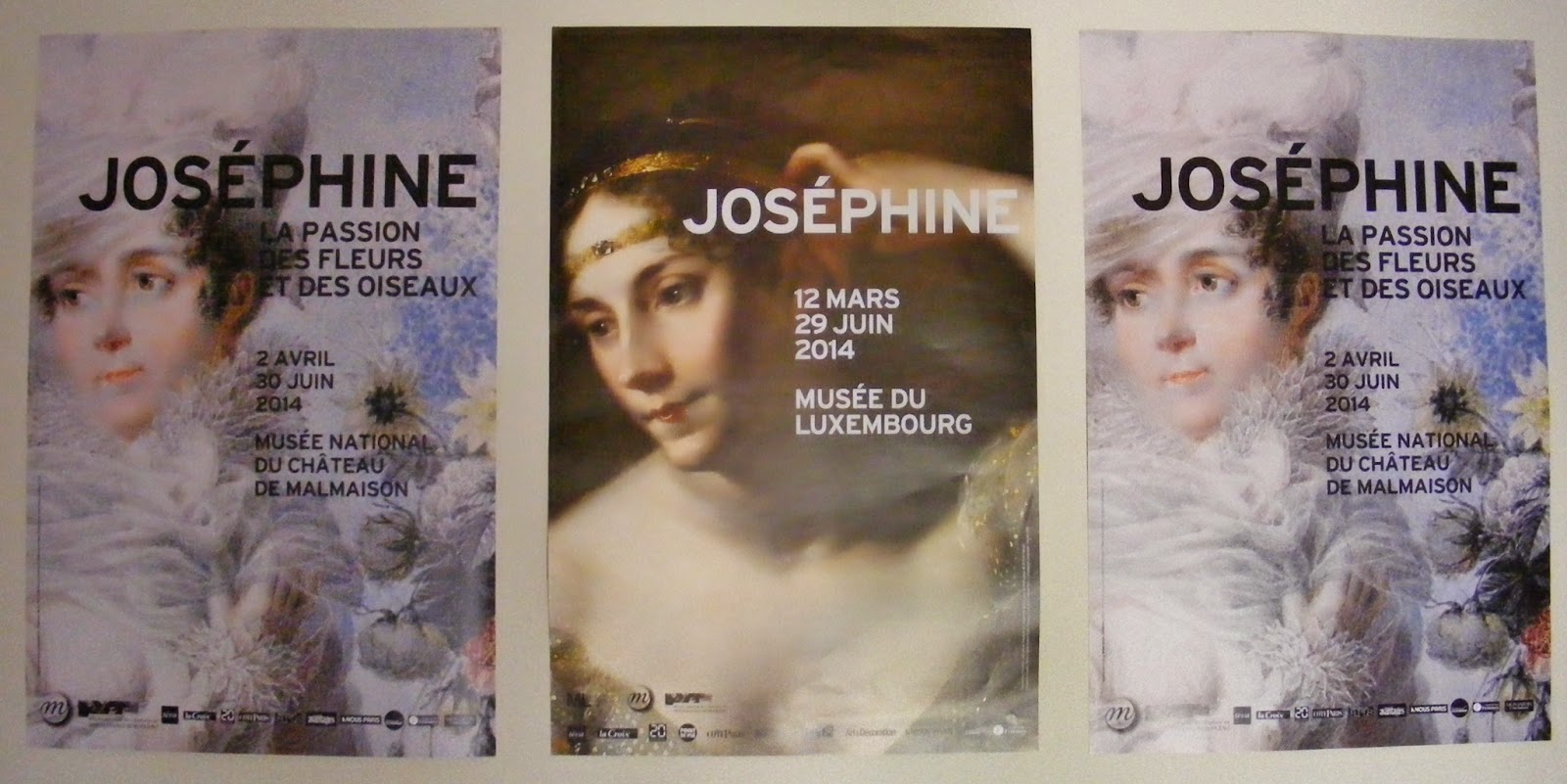 Some lives just flow along peacefully, like a calm brook running through green meadows.  And others are like raging rivers, a-boil with rapids and waterfalls crashing onto the rocks below.

Once upon a time there was a little girl who lived on a tropical island.  She was called Marie-Josèphe Rose Tascher de la Pagerie, which was much too big a name for a little girl so everyone just called her Rose, and sometimes even Yéyétte.  She lived happily on her family’s sugar plantation until hurricanes destroyed it. So her aunt did what people did in those days when they needed money; she married Rose off to a wealthy aristocrat in France. And at age 16, little Rose sailed across the Atlantic, leaving behind her family and her beloved island of Martinique to become Mme. Alexandre de Beauharnais.
Rose’s aunt hadn’t done her a favor.  Her marriage to Alexandre was unhappy but fruitful. Two children were born:  Eugène after two years and then two years later Hortense.  When they were only 13 and 11, they were thrown in prison along with their mother, who was accused of being married to a noble, and what’s more a general who hadn’t defended the newborn Republic well enough in battle.  It was the Reign of Terror and Robespierre was feeding the guillotine daily.  One of the meals was Alexandre.
Every day the guards would come to the huge, filthy, dark and promiscuous rooms where dozens and dozens of people were thrown together.  The guards had a list and would read off the names of those taken away to die.  No one ever knew if that morning would be their last. Marie-Josèphe and her children were held for over three months.  For 98 days, they waited every morning for their names to be called out by the guards.  Then on the 99th day, their names were called... and they were released.  But only because Robespierre had been fed to the guillotine himself.
During those months, Marie-Josèphe would see, and perhaps do, things that people do when they think they are about to die.  It changed her to her very core.  Some say she became frivolous and of easy virtue.  But if you look at the way she lived her later years, you’ll know that it only made her wary of life, society and mankind in general.

Then someone introduced her to a young general from Corsica who fell madly in love with her, a short man with a huge desire to succeed.  He had a funny Italian-sounding name - Napoleone Buonaparte - and yet he found her name unacceptable and so he transformed Marie-Josèphe into Joséphine, married her and whisked her away on his mad dash to immortality, ultimately making her Empress.  And with it fulfilling a prophesy made to her back in her native Martinique: “You will be queen... no, more than queen.” 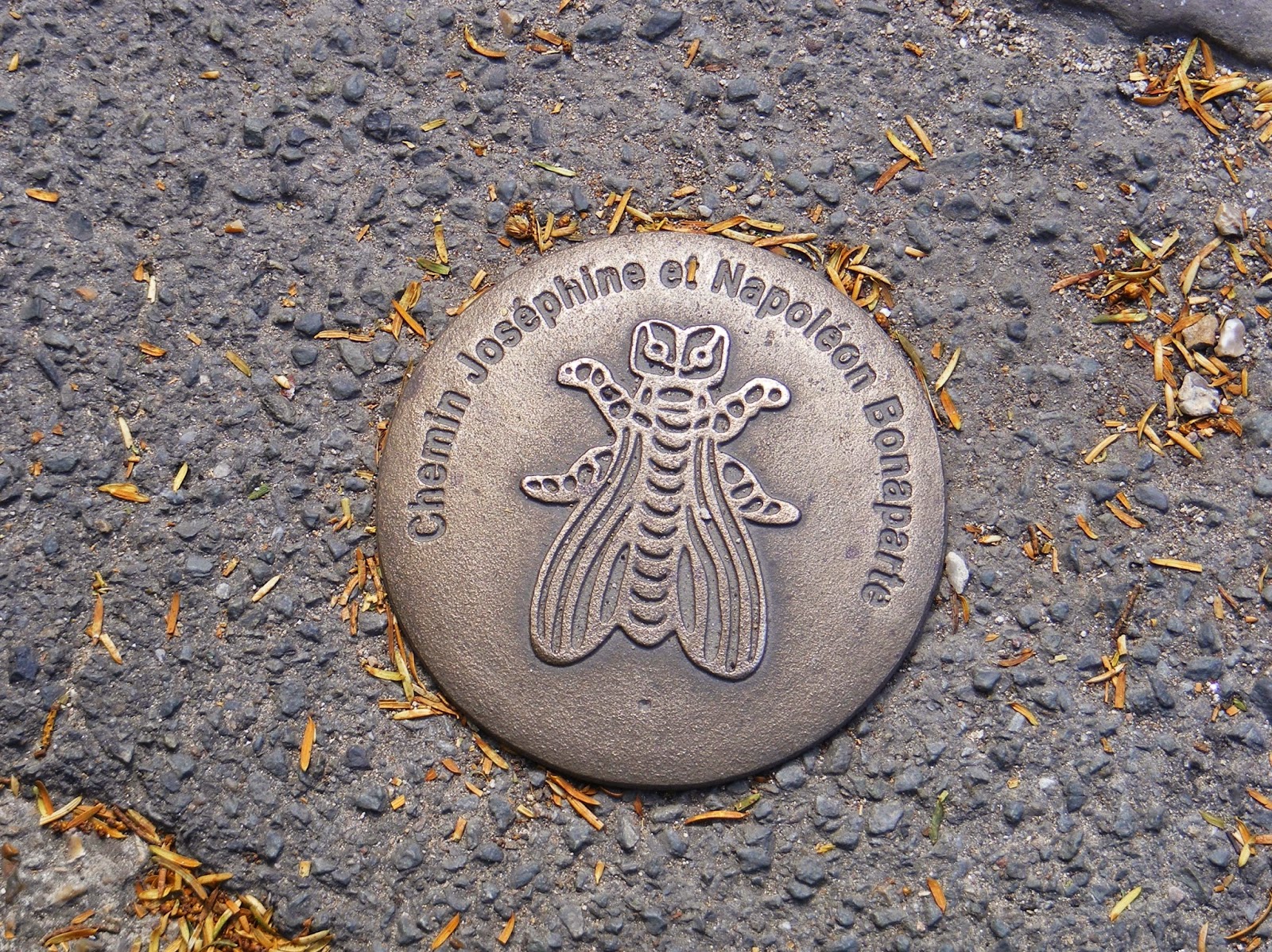 Joséphine filled the role well.  She was cultivated where Napoleon was not and that lent him a distinction he wouldn’t have had otherwise.  She loved jewelry and was the setter of fashion, preferring a more natural look of flowing lines and what became known as Empire waistlines, soon adopted by all of France and much of Europe as well.  She sought a refuge from the imperial court - and perhaps from all the horrors remembered from those 99 days - preferring to live in the country.  And as Napoleon was often away fighting one battle or another, she bought a manor with land along the Seine River well downstream from Paris:  Malmaison.
When Joséphine proved unable to provide Napoleon with children to carry on his legacy, the Emperor divorced her to marry someone who could. Malmaison was part of her bargain.  And it became her world.
The house is still there, although the property surrounding it is only about a tenth of what it once was.  Buying up any land she could, Josephine put a buffer between her and the rest of society.  She did have illustrious guests though, such as Tsar Alexander I.  It was while showing him her gardens that she caught pneumonia.  Joséphine died four days later at age 51. 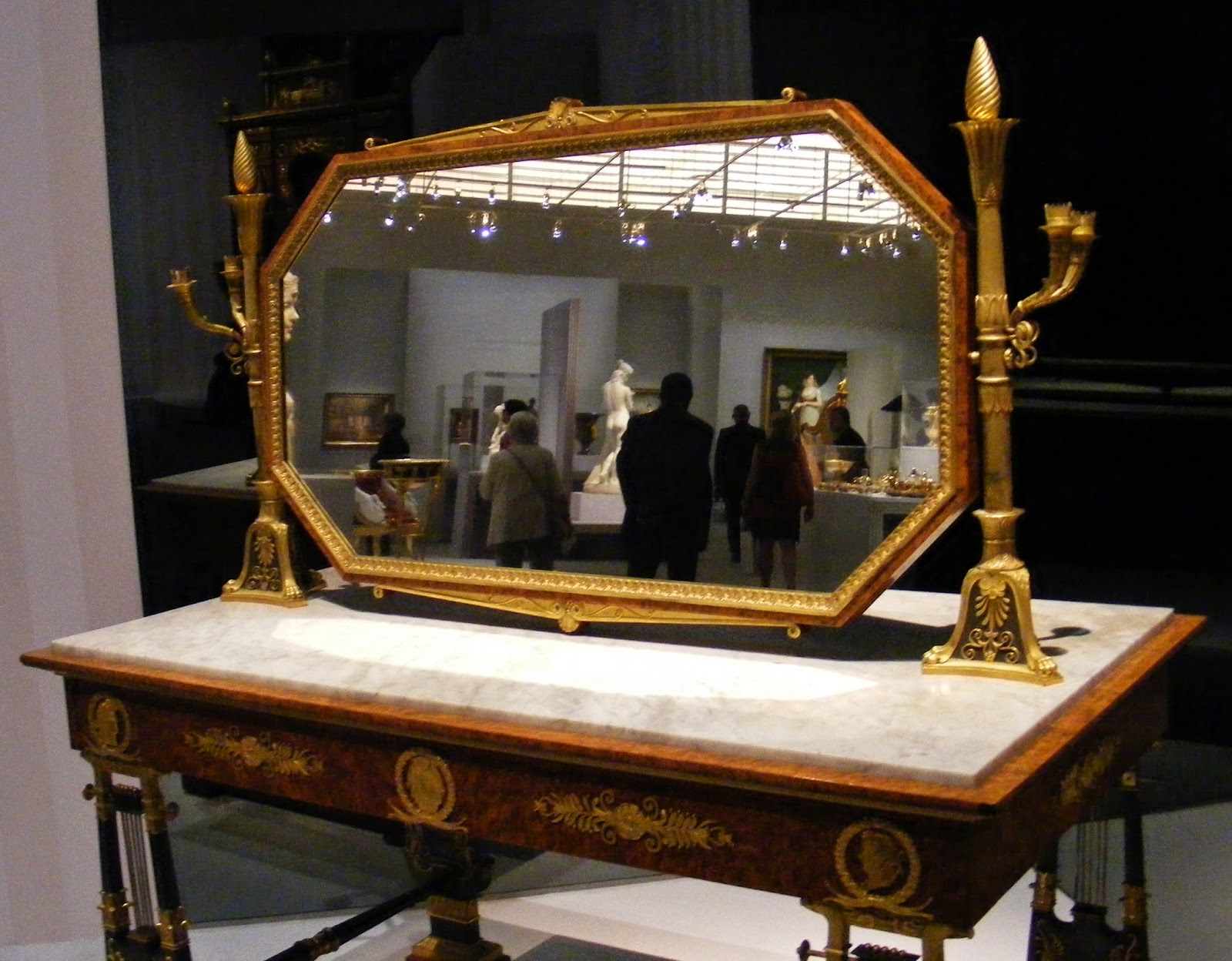 Two hundred years after her death, France is honoring her with two shows. One is at the Luxembourg Museum in Paris; the other is at her home outside the capital in Rueil-Malmaison. 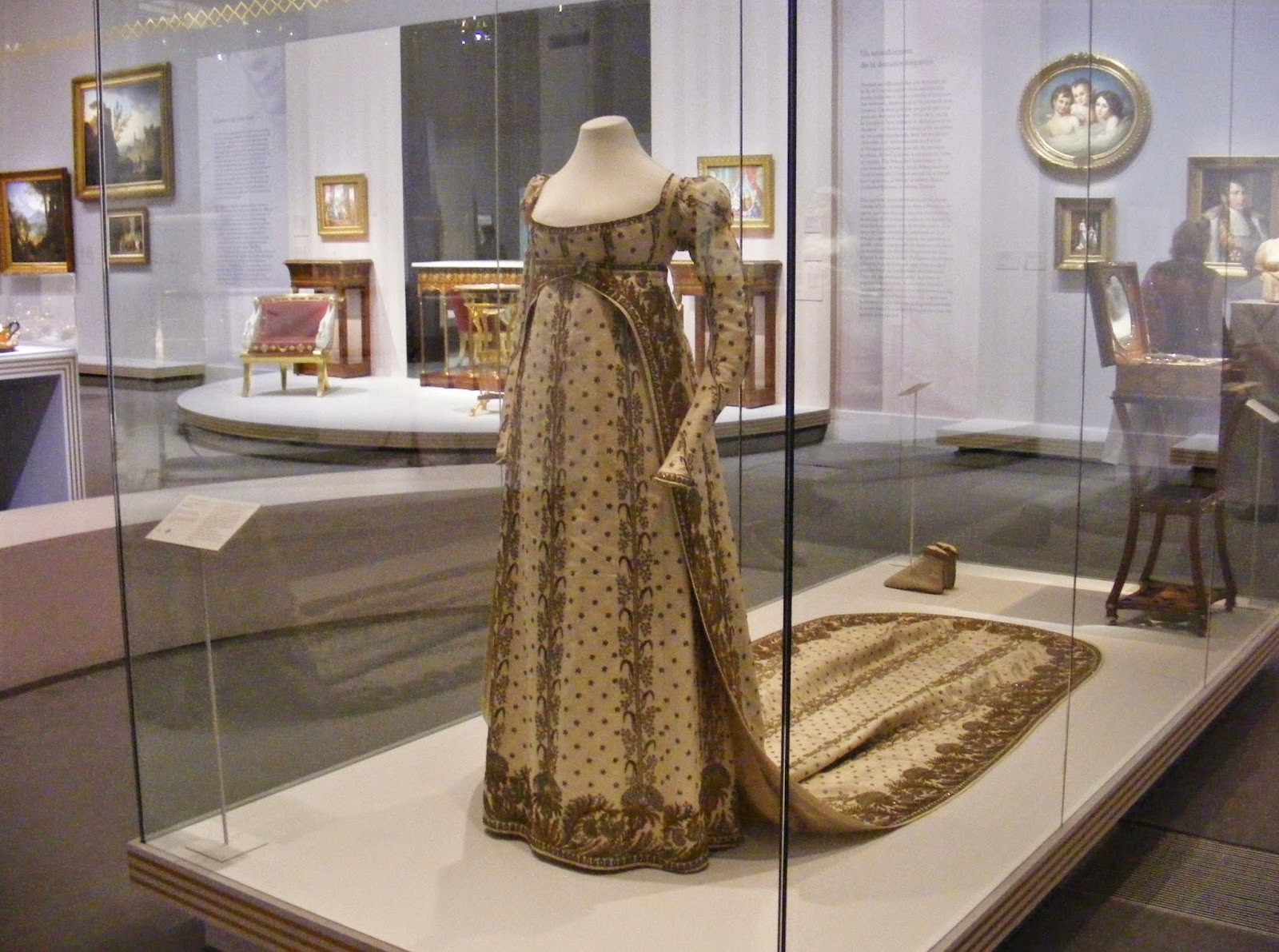 The show at the Musée du Luxembourg is small and consists mainly of items of Joséphine’s wardrobe, some pieces of furniture in the Empire style and artwork of her or owned by her.  A diamond-and-ruby brooch was particularly striking, as were the sapphire earrings next to it.  There are large placards retracing her life, as well as her actual birth certificate and divorce papers.  The exhibit is grandiose and spacious in its setting, which is rarely the case at the small Musée du Luxembourg but these items are rarely seen, so worth the time if you’re at all interested in the little island girl who became “more than a queen”. 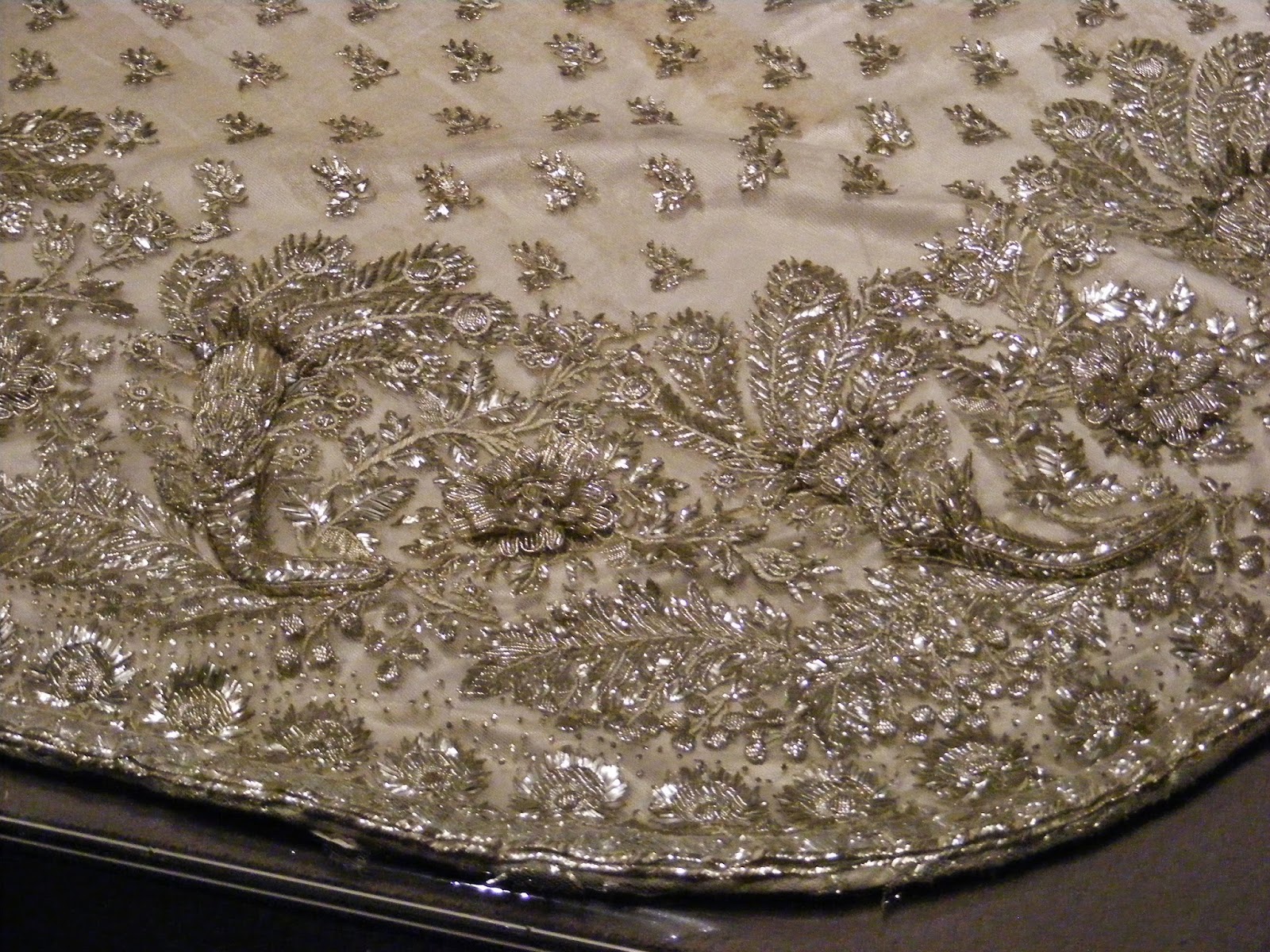 The second show at Malmaison is also small and tightly focused on the love Rose Yéyétte always showed for flowers (and not just roses) as well as for animals, especially birds.  It is well documented by drawings of plants by Redouté, others of which are on display at the Musée du Luxembourg.  A highlight is the magnificent, sparkling robe embroidered not with silver thread, but with platinum!  At the end of the show it will be put away again and not seen by us common mortals for a few more decades, so that alone may be worth the entrance fee.  In addition to the artifacts, this exhibit has an artistic touch, with lace mobiles casting flowery shadows on the ceilings and walls, and it comes complete with a soundtrack of the birds that Joséphine loved so much.  The show takes up the top floor of the residence. 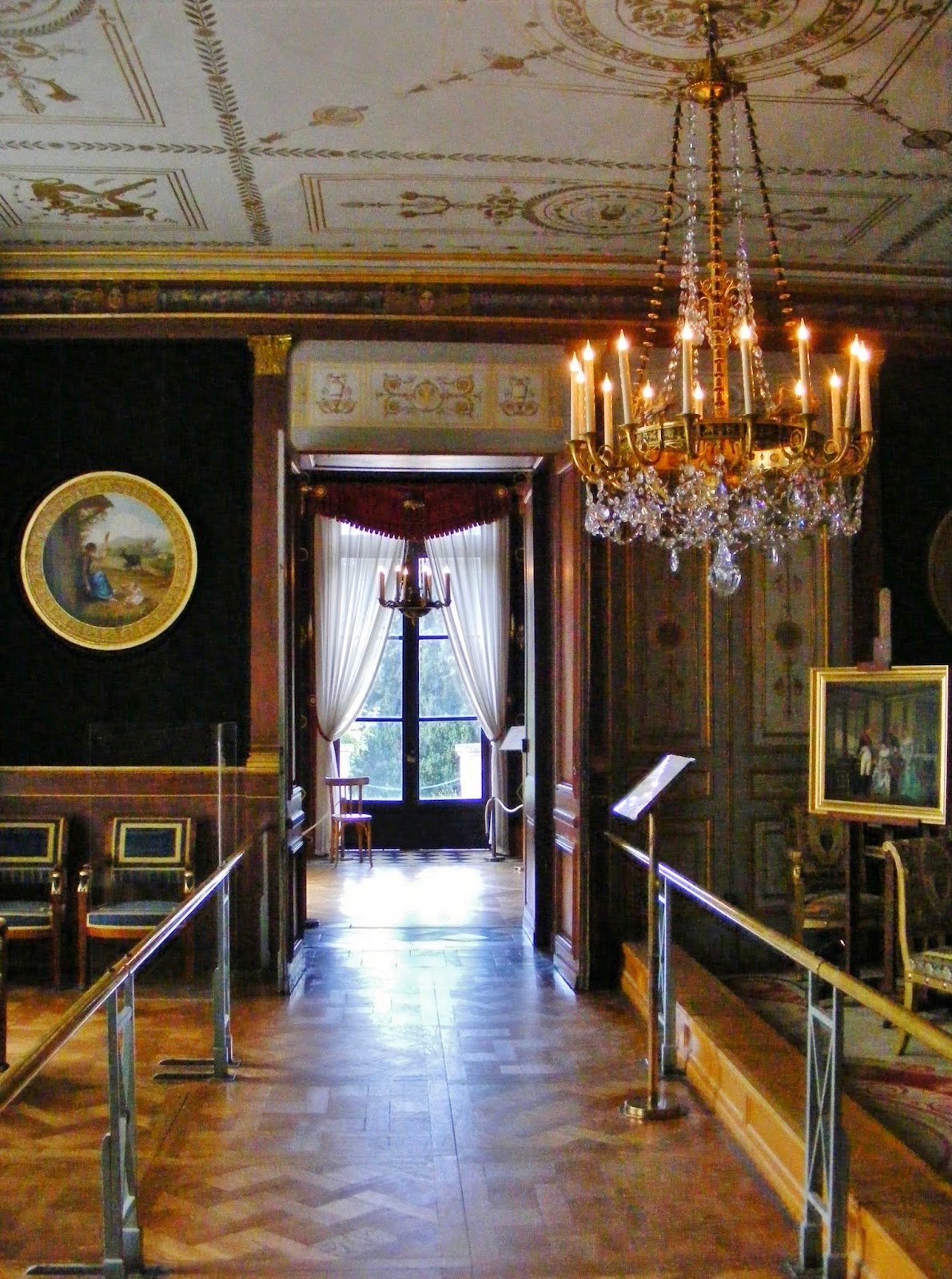 But the other two floors are well worth a detour.  On the ground floor are the public rooms:  the library and council chamber, the dining room and billards room, the sitting room and music room, which is delightfully sunny.  Upstairs are the private living quarters:  the Emperor’s apartment at one end, Josephine’s apartment at the other, and various rooms in between which must have seen a lot of traffic, given Napoleon’s love for his “Creole wife”.  These rooms are fully furnished and give an excellent idea of how Joséphine chose to spend her years both during and after life with Bonaparte.
After that you can stroll through what remains of her property, enjoy the gardens and perhaps even visit the hothouse she had built.  Pick a nice sunny day to make the most of Joséphine’s little corner of paradise. 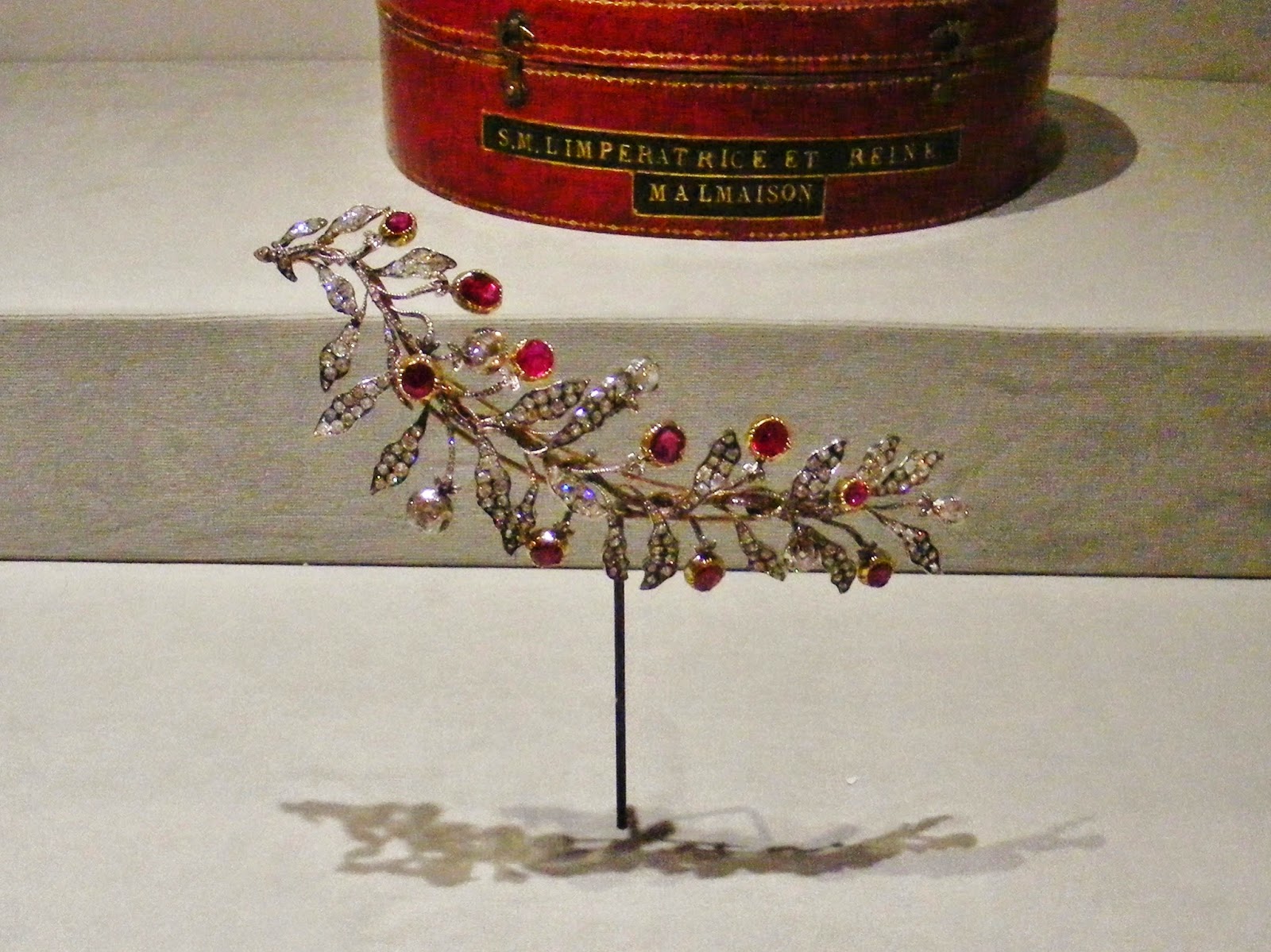 
I should have posted this before.  Now both shows are over.  BUT Malmaison is open year-round, so you can always see the residence and the gardens and the hothouse Joséphine created.  It's just outside Paris proper.