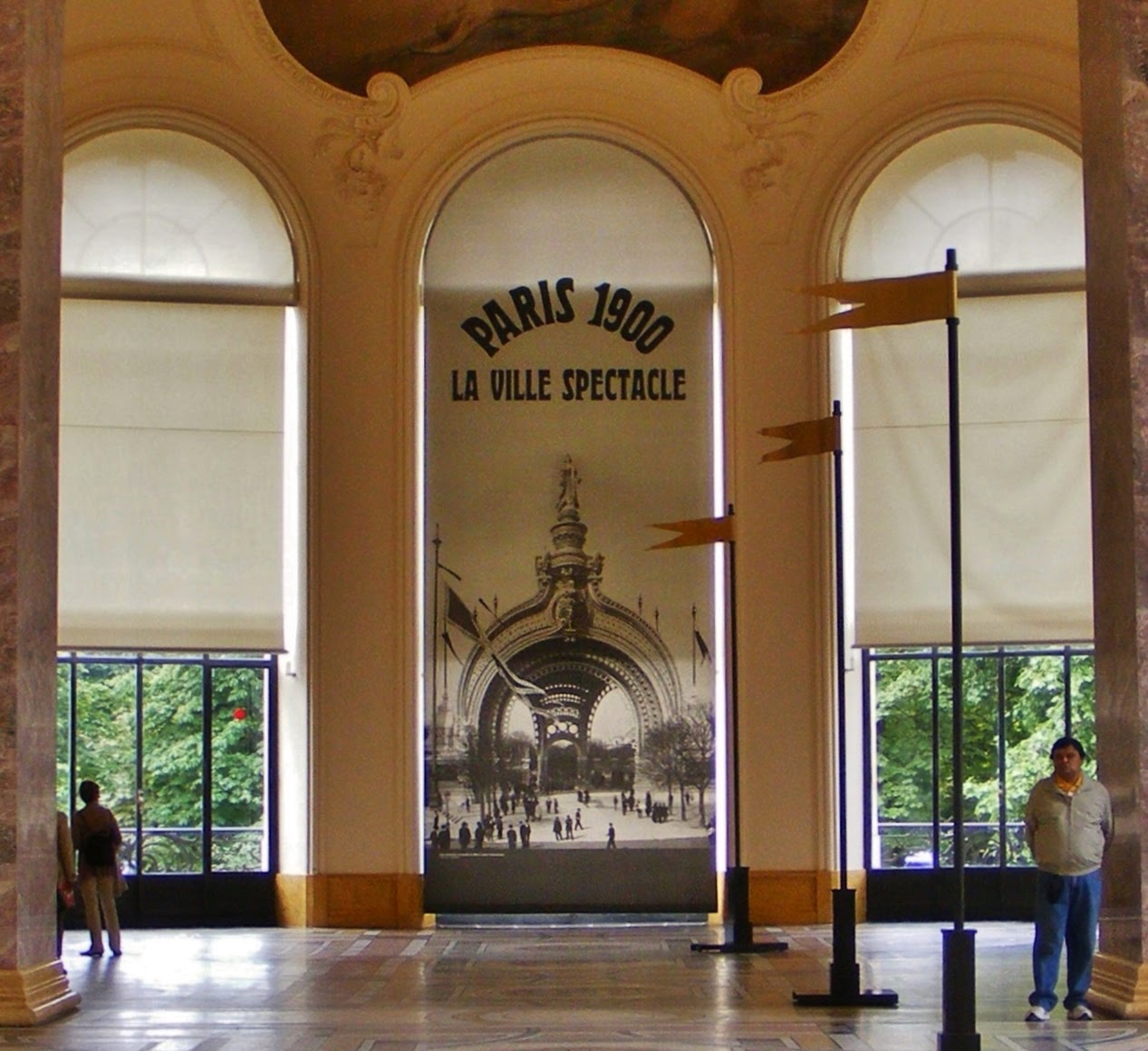 At the turn of the last century, Paris held a party:  the Exposition Universelle. It was largely a celebration of France’s colonies around the globe, second only to England’s at that time.
But above and beyond all the xenophobic look-at-me-aren’t-I-grand-ness of the message, the media made extensive use of a new art form:  Art Nouveau.  It was a new approach to architecture and art, and it found an echo in almost every other facette of society.  Clothing changed, and with it habits.  It was a new century, and it required new ways.
The Petit Palais - the Beaux-Arts Museum of Paris - has composed a collage of those different facettes of life in 1900.  And it’s been a hit ever since it opened in April.

The first room, dedicated to the Exposition Universelle, was a bit of a disappointment.  Two huge areas filled with photos and posters and such about the Expo.  My stomach suddenly sank as I started to fear that the whole show was about just that and nothing more.  There were various three-dimension friezes that displayed amazing craftsmanship, and a large poster of all the national pavilions was interesting, but the topic seemed a bit more historical than artistic for my tastes.  “This isn’t going to take long,” I thought.  But that didn’t jibe with all the praise I’d heard about the show from friends.  So I soldiered on.

It soon became obvious that the first area was just an introduction because around the corner lay a room entitled Art Nouveau.  This is more like it, I thought.  Here were examples of how Art Nouveau translated into all forms of artworks.  There were lots of glassworks by the masters of the craft: Gallé, Tiffany, Daum...  Along with objects by Mucha, dresses by Worth, furniture by all the great names of the period, ceramics from the Manufacture de Sèvres and even a book on bull-fighting whose binding was the work of Goya himself.  Several display cases spotlighted women’s jewelry, and especially hair combs that held in place those elaborate turn-of-the-century hairdos.
The following room was named Paris, Capital of the Arts. And it set about stating its case with myriad paintings, statues, photos and posters.  An unfinished head by Rodin showed how the famous sculptor worked up his masterpieces, layer by layer sometimes - a fascinating peek under the artistic skirts of a genius. And there were other masterful works here by names not familiar to me:  sculptor Paul Troubetzkoy and painters such as Albert Edelfelt, Tony Robert-Fleury or Eugène-Samuel Grasset.  It was the most museum-like of all the rooms and filled to the brim with wondrous examples of various versions of Art Nouveau. 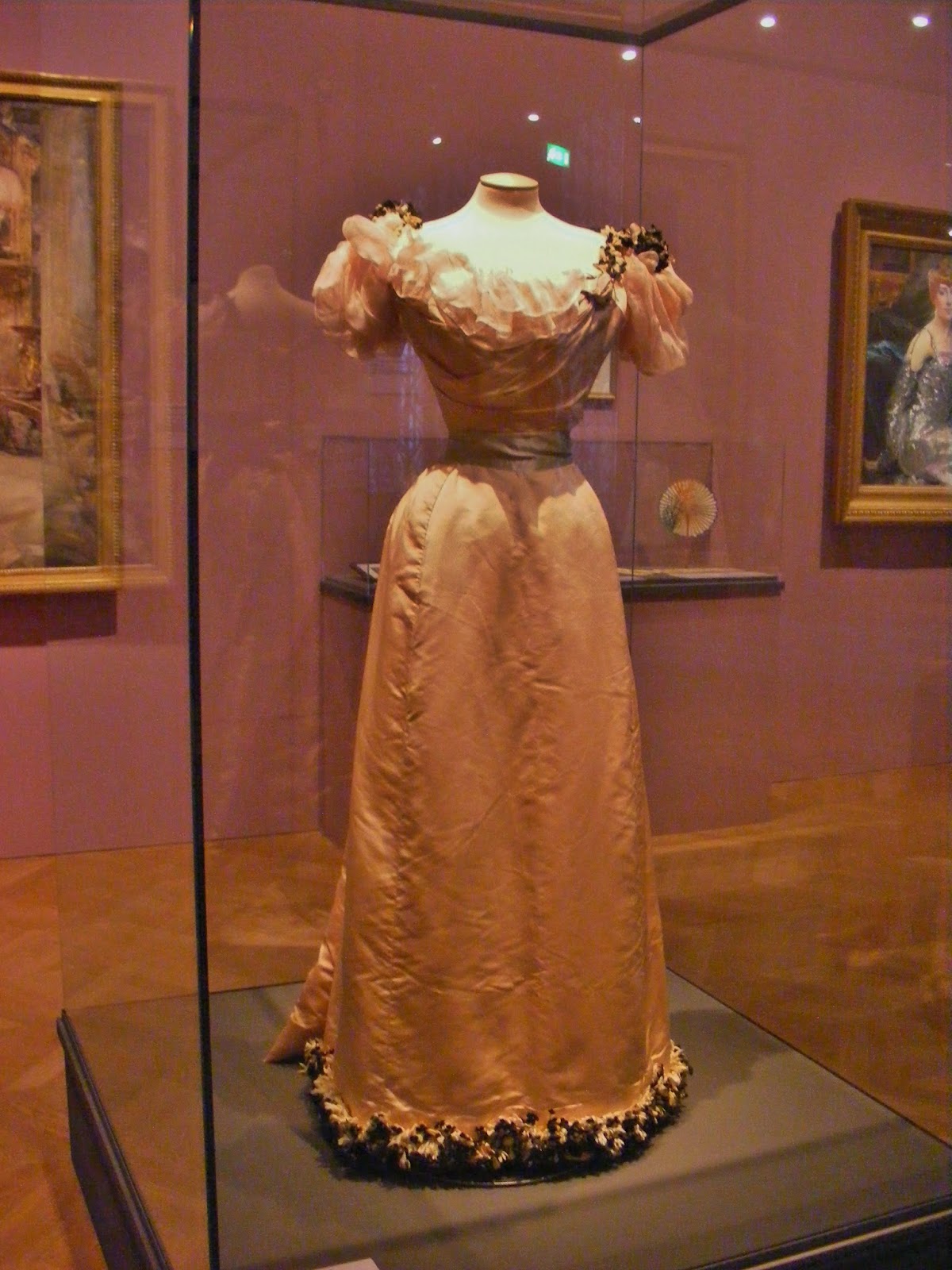 Then came a room called The Myth of the Parisian Woman.  As its name implies, the focus here was squarely on fashion.  Many cases displayed clothing of the era, from simple to elaborate.  But the reputation for Paris being the be-all-and-end-all of fashion was also backed up by photos as well as portraits of women who epitomized the Paris Look of the era.
And once you’re all dressed up, where do you go?  Out!  Paris By Night, the next room, covered all the choices ladies - and their accompanying gentlemen, of course - had at their fingertips.  Vestiges of the panoply of theaters, music halls and other divertissements of France’s capital. My beloved Montmartre figured well here, with the Chat Noir cabaret and much Toulouse-Lautrec. But on the more seamy side, a small central room (womb?) crystallized the ladies of the night for whom Paris was notorious, with period nudie postcards and even a strange chair from one of the rich men’s brothels.  Quite an education, this room. 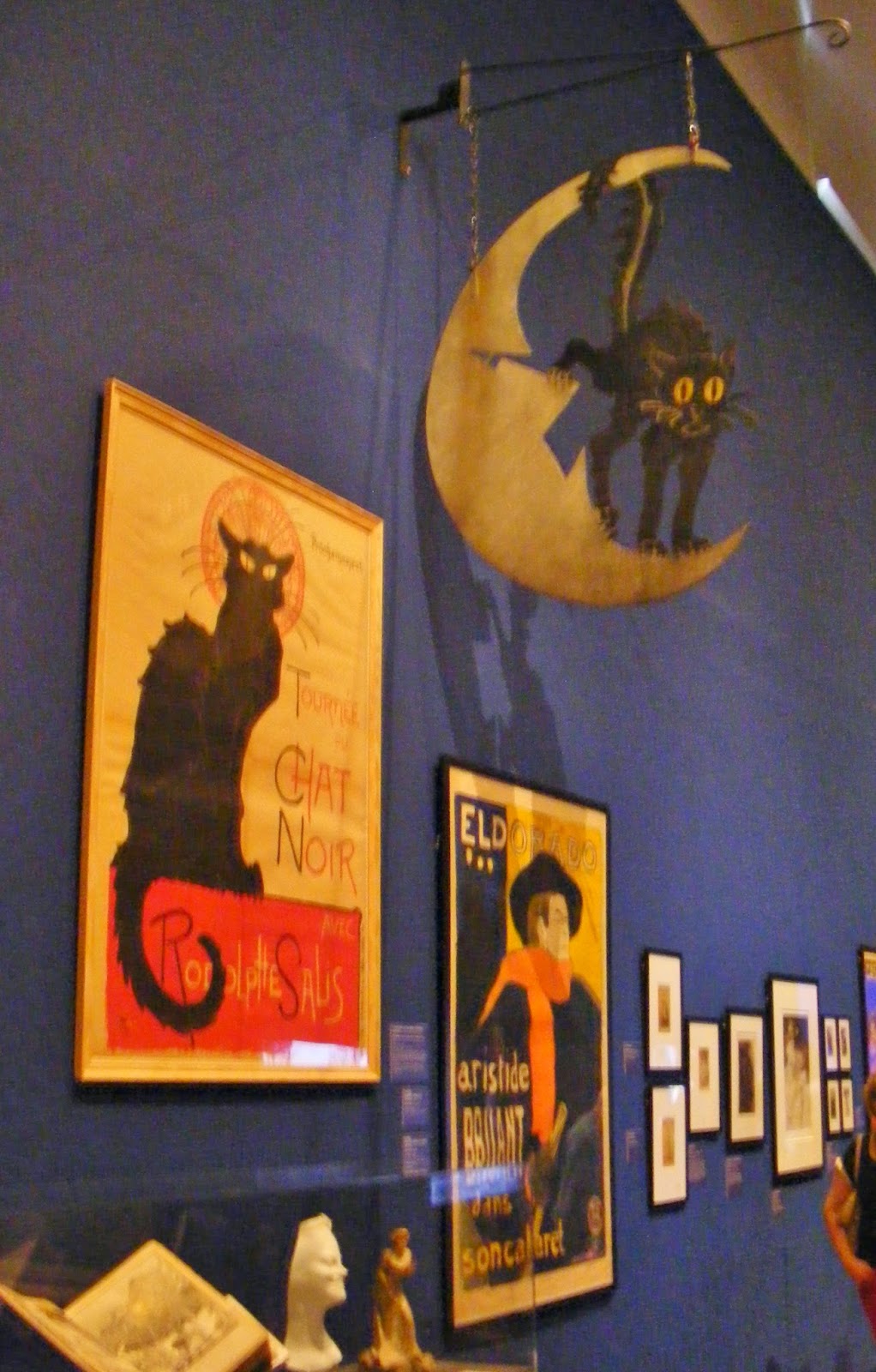 The last room was Paris en scène, focusing on the silver screen through posters and photos.  In a side room looped the 1902 Méliès short film Le Voyage dans la lune (A Trip to the Moon), which amazed movie-goers of the period.  Not content with just telling a story - here one by Jules Verne - Méliès was the master of the very first special effects.
Each of these rooms was separated from the next by a dark and narrow passage with mirrors on one side and film running on the other.  A kind of introduction into the upcoming matter.  A nice touch.
The pieces in this remarkable exhibit come not only from the Petit Palais’ own fine collection of Beaux-Arts but also from other Paris museums that focus on this period of art history:  the Marmottan and its collection of Monets, the Orsay, which covers the Impressionism period from start to finish, and the Carnavelet, which specializes in the history of Paris.  It also includes artworks graciously on loan from private collections and from museums abroad.
My friends were right in their praise.  This is a show that should figure high up on any list of exhibits to be seen. 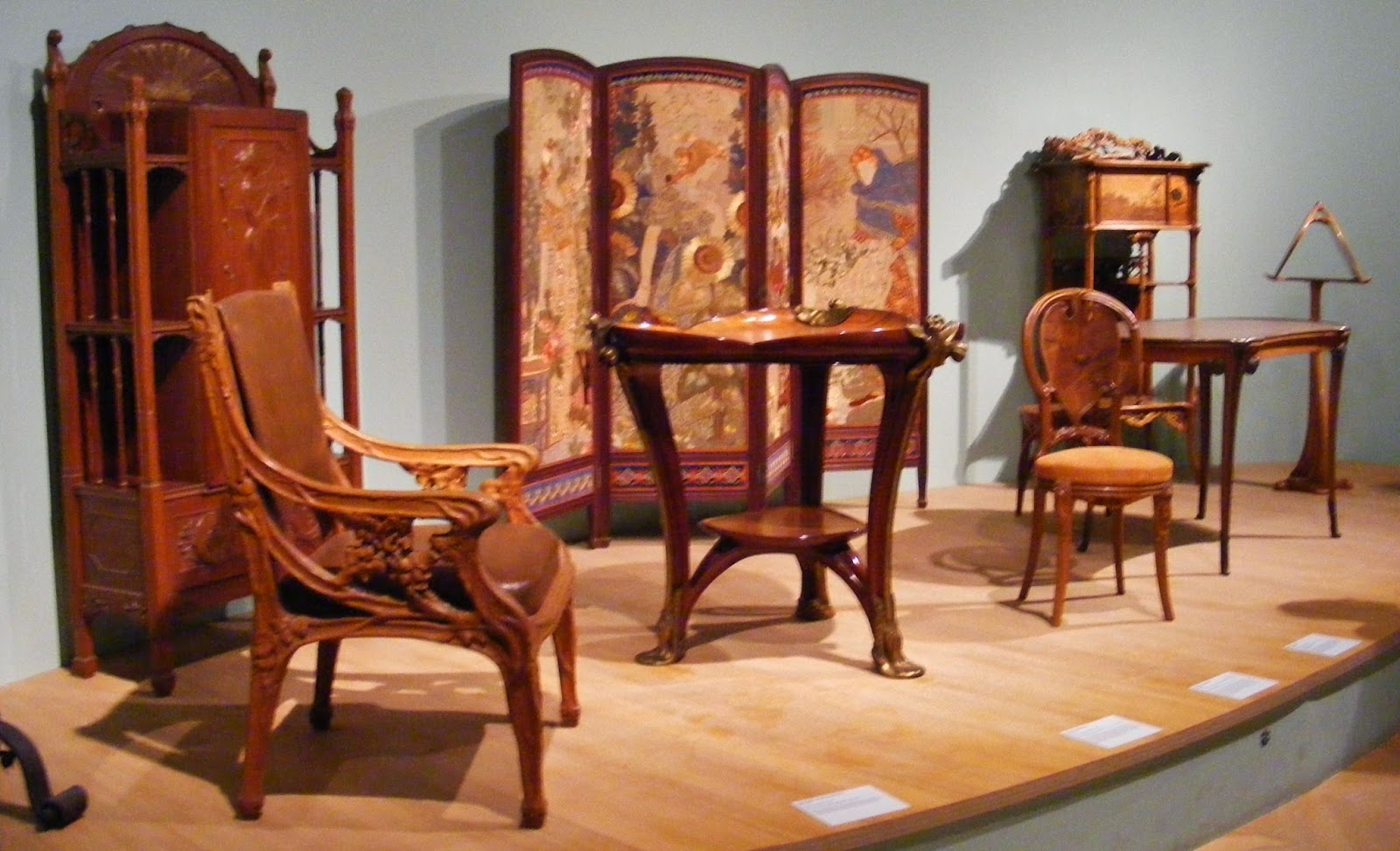 A suggestion:  afterwards, to stay in the Art Nouveau mood, head for a meal at the Gare de Lyon’s Train Bleu or Mollard across from the Gare St. Lazare. Both have a décor that will bring what you’ve seen to life in a delicious way. 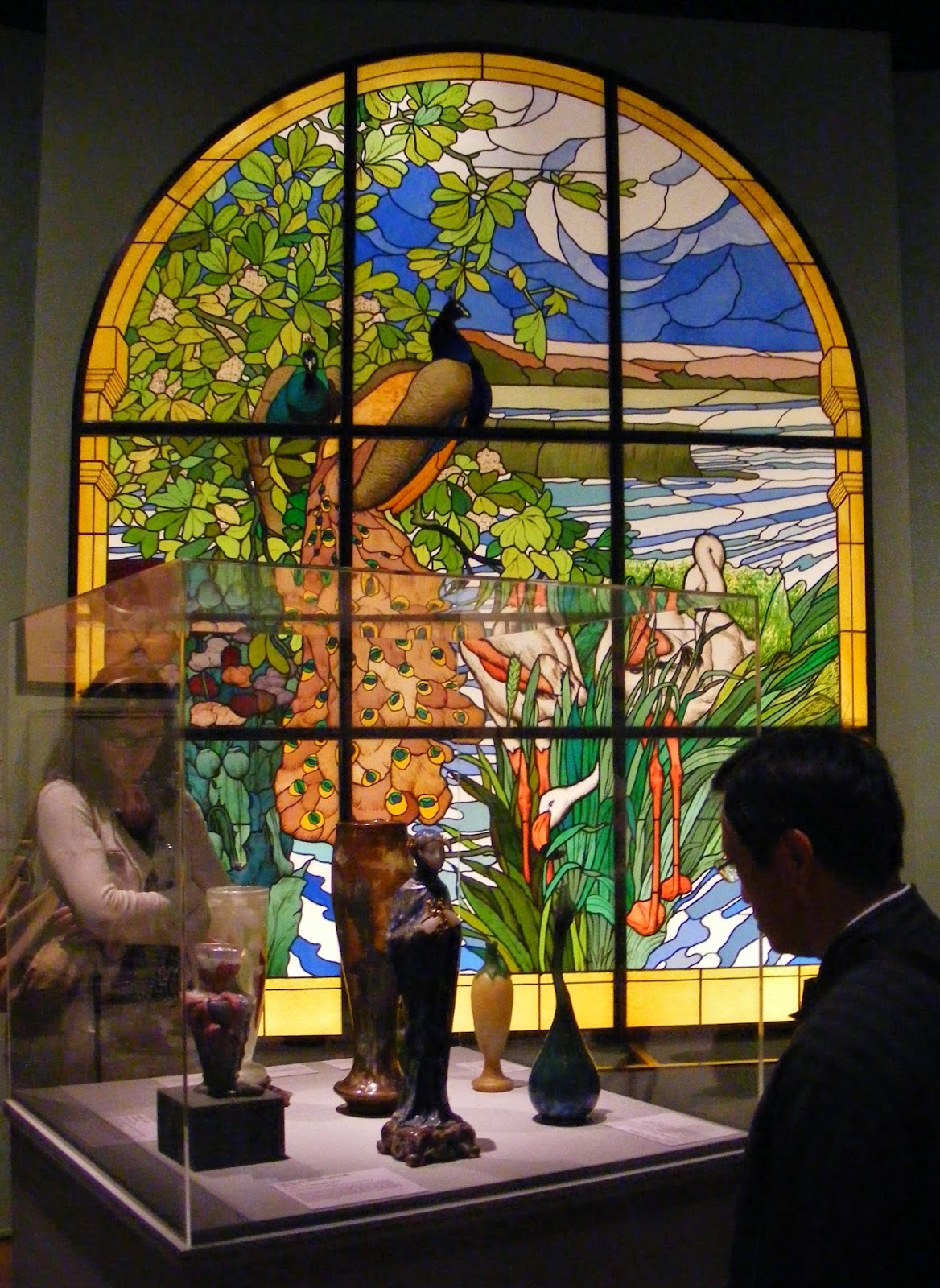