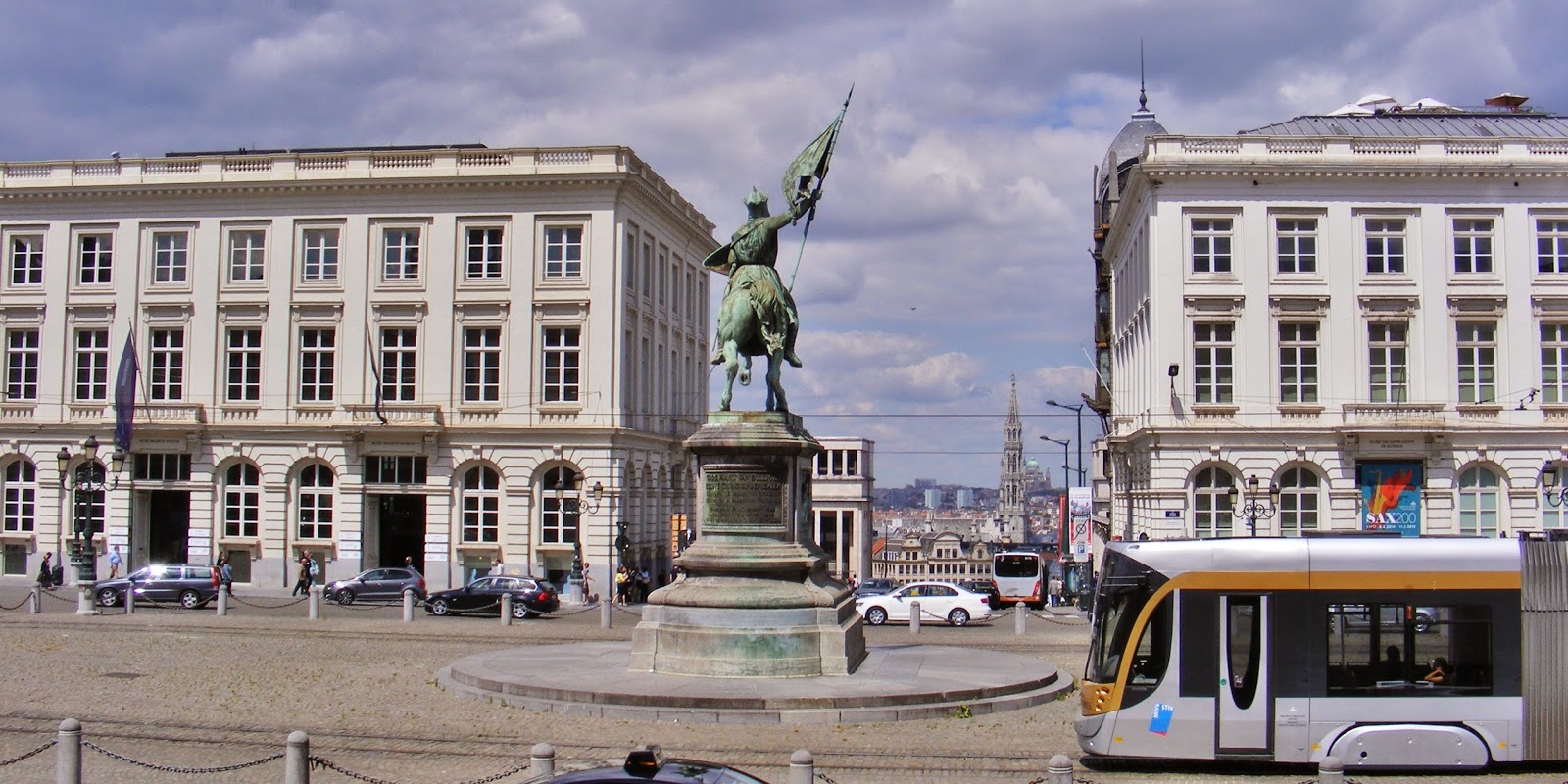 Paris has the Musée d’Orsay.  Now Brussels has the Musée Fin de Siècle.
With my train arriving from Leuven hours before my lunch with a friend, I had time to spare.  And uphill from the Central Station lies a whole complex of museums, the Royal Museums of the Fine Arts of Belgium.  As part of the “redeployment” of their collections, they had the excellent idea of creating a museum for René Magritte in June of 2009. Then only a year and a half ago they created a “turn of the century” museum.  And it covers the artistic period dear to my heart:  the Impressionist years.
Whether this decision was to attract some of the funds that flow from the swarms of art lovers who flood the Musée d’Orsay in Paris, or whether it was just the brainchild of the curator, it was brilliant.  I decided to give it a peek... and surfaced (literally) well over two hours later.

You enter at ground level, “ground” being at the top of the hill overlooking the old sector of Brussels.  And it’s all downhill from there.  Again, literally. 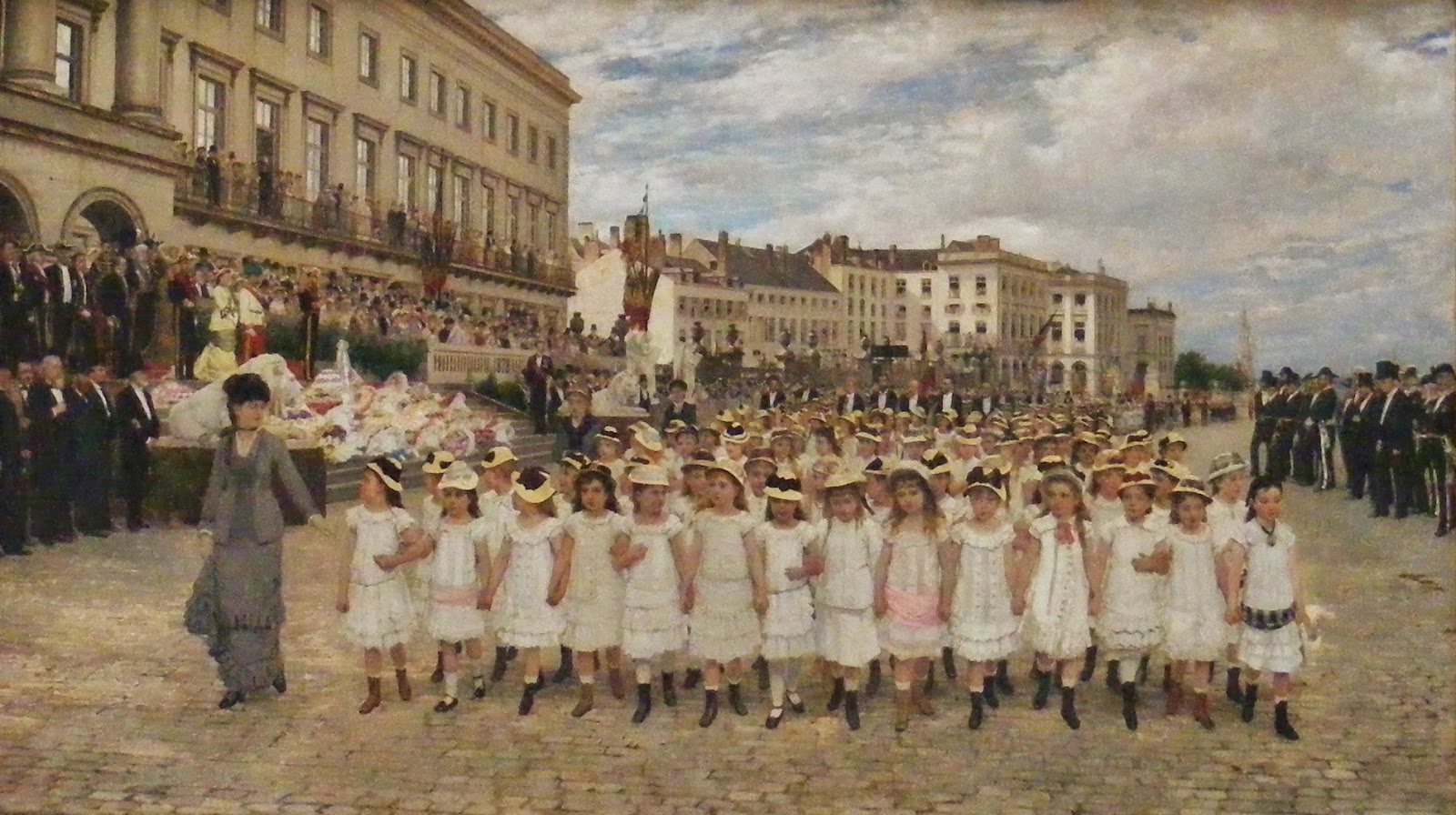 After you buy your ticket, you pass through a majestic hall, which reminded me of the Detroit Institute of Arts hall, minus Diego Rivera’s frescos.   On one side stands a marble statue of a very shapely naked man with a sword.  Across from him, a painting of a class full of young girls in white frocks and bonnets who, at that time, had probably never even seen their father with his shirt off.  It’s an interesting juxtaposition.
Then you go down a level, where you’re obligated to leave your goodies in a locker.  Ladies, be warned that even my oversized purse was persona non grata, although I saw no artwork in the museum actually small enough to fit in it, should I have decided to try to steal it.  They do allow cameras though, and the taking of photos (without flash) which isn’t the case for all museums any more especially those with well-stocked museum shops.
After that you go down another level, and that’s where the art trip through time begins.

Generally speaking, the art is displayed in chronological order.  The lower the floor, the deeper into Impressionism you are.  On the first level down is an oil-on-wood masterpiece by Henri Leys called Churchgoers.  His sketch of a nattily-dressed couple headed off to church on a Sunday morning is rich in color, in spite of being incomplete.  It marks the start of the transition into Realism by this Romantically-trained Belgian artist.
The next painting that caught my fancy was a jump back slightly in time, to John Constable and his Sky Study:  Brighton Beach.  Here were the very beginnings of what would become Impressionism by the time Guillaume Vogels painted his oil canvas of Ixelles, Rainy Morning just a few feet farther down the wall.  The “impression” of rain and gloom made you want to turn your collar up and open your umbrella.

And then the clouds part and the blue skies come out and I was walking along the banks of the Lys River with Emile Claus almost at the turn of the century.  In Trees Beside the Lys, the rosy sun - whether at dawn or dusk - lights up row upon row of tall trees, the whole picture reflected in water the same color as the sky.  It was all quite misty and ethereal. 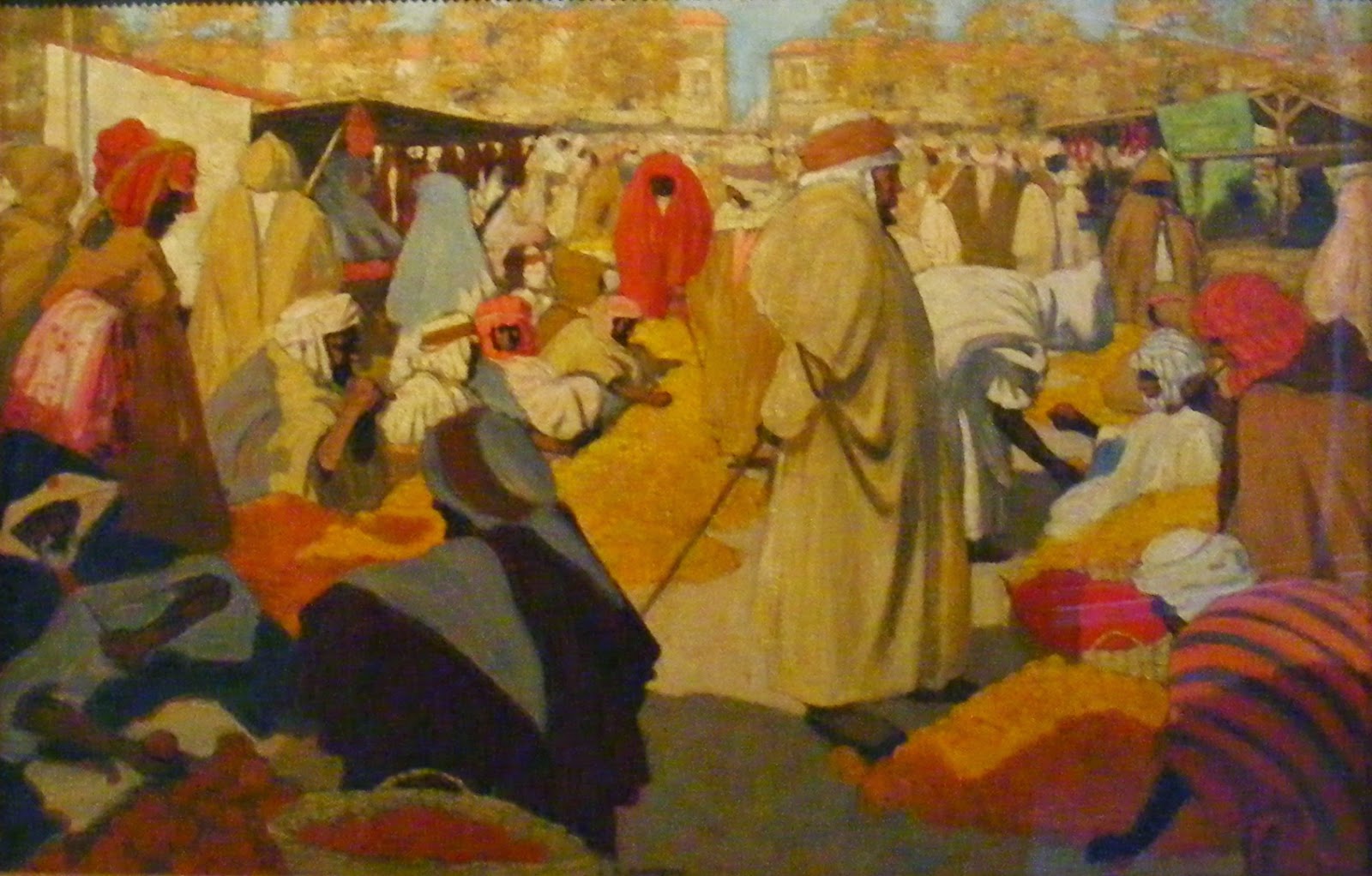 Two more paintings stood out for me, both colorful but in totally different palettes and in different styles.  The first was Edouard Vuillard’s Two Schoolchildren.  They seem to be hiding behind some trees, looking at the elegant ladies passing by as we look at them from outside the frame.  One seems to be pointing and whispering something to the other.  I wished I could have heard him.  The second painting was very busy where Vuillard’s had been almost secretive.  Full of bursts of bright orange and long Algerian robes, slashed by sharp shadows, Henri Evenepoel captured the heat of Algeria in his Orange Market at Blida.  You could almost feel the dust and smell the citrus in the air, and see hints of what
would come later with Fauvism, long after Evenepoel died at only 27. 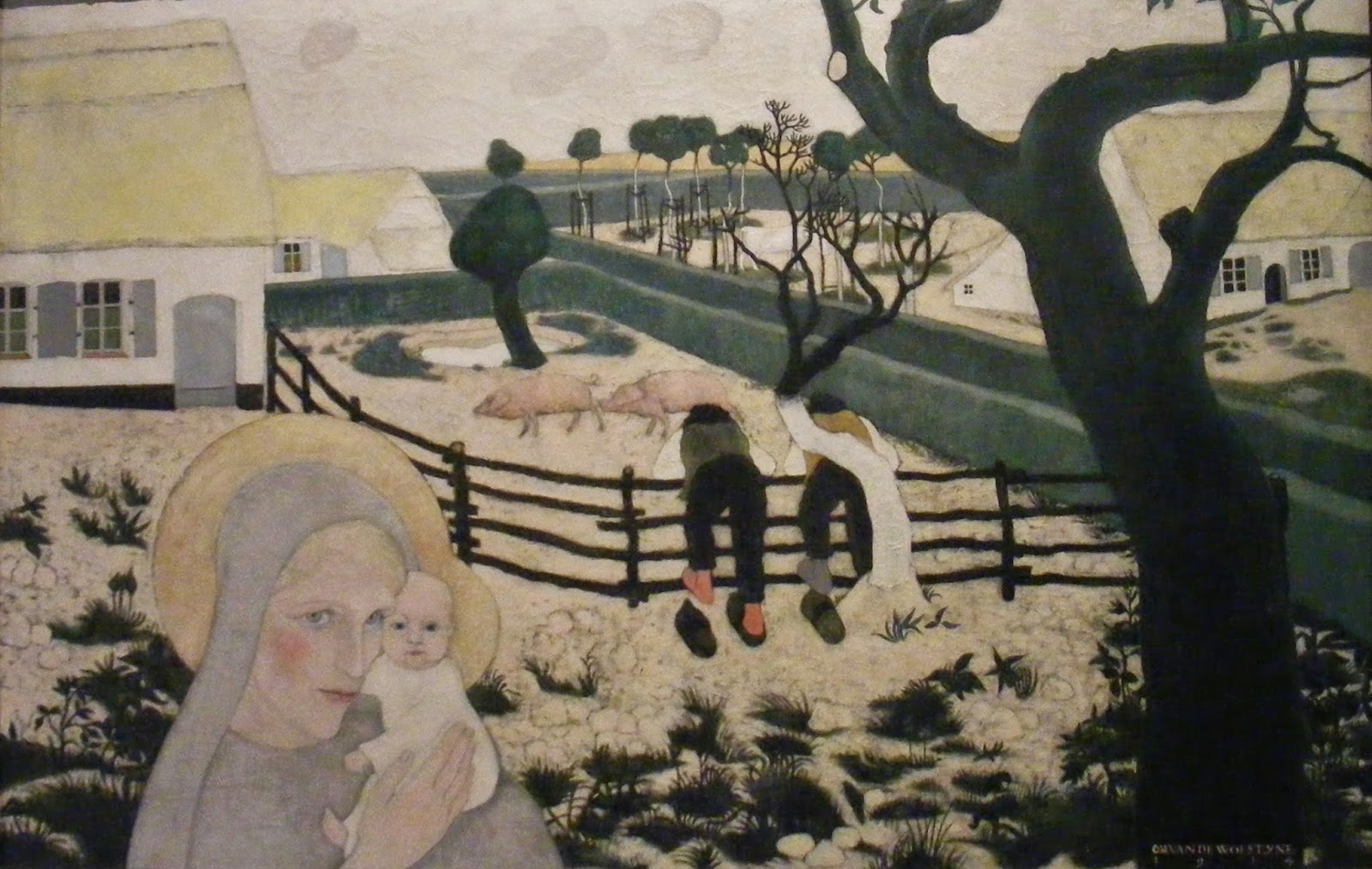 At the very lowest level (-8!), there were the most recent paintings in the collection. One was a group of strange faces by Emile Fabry.  Most of the women are staring at something one of them is holding; it looks like colorful flowers.  Others are staring straight out of the painting, at us, the viewers.  All of them show no emotion at all, which I found strange in view of the title - The Offering - but perhaps that’s normal for Symbolism.  Another Symbolist painting nearby was of a different style:  something like a cross between Gauguin for the background scene and Puvis de Chavannes (of Paris Panthéon fresco fame) for the hallucinatory Virgin with Child in the foreground.  It was painted by Gustave van die Woestyne and is called Sunday Afternoon for some reason - although that might explain the Virgin - and the farmers are not working but just admiring their pigs.  In spite of the flatness of the image, perspective is indicated by the size of objects and by the spacing of the lines of the hedge and also the fence.  It was quite fascinating. 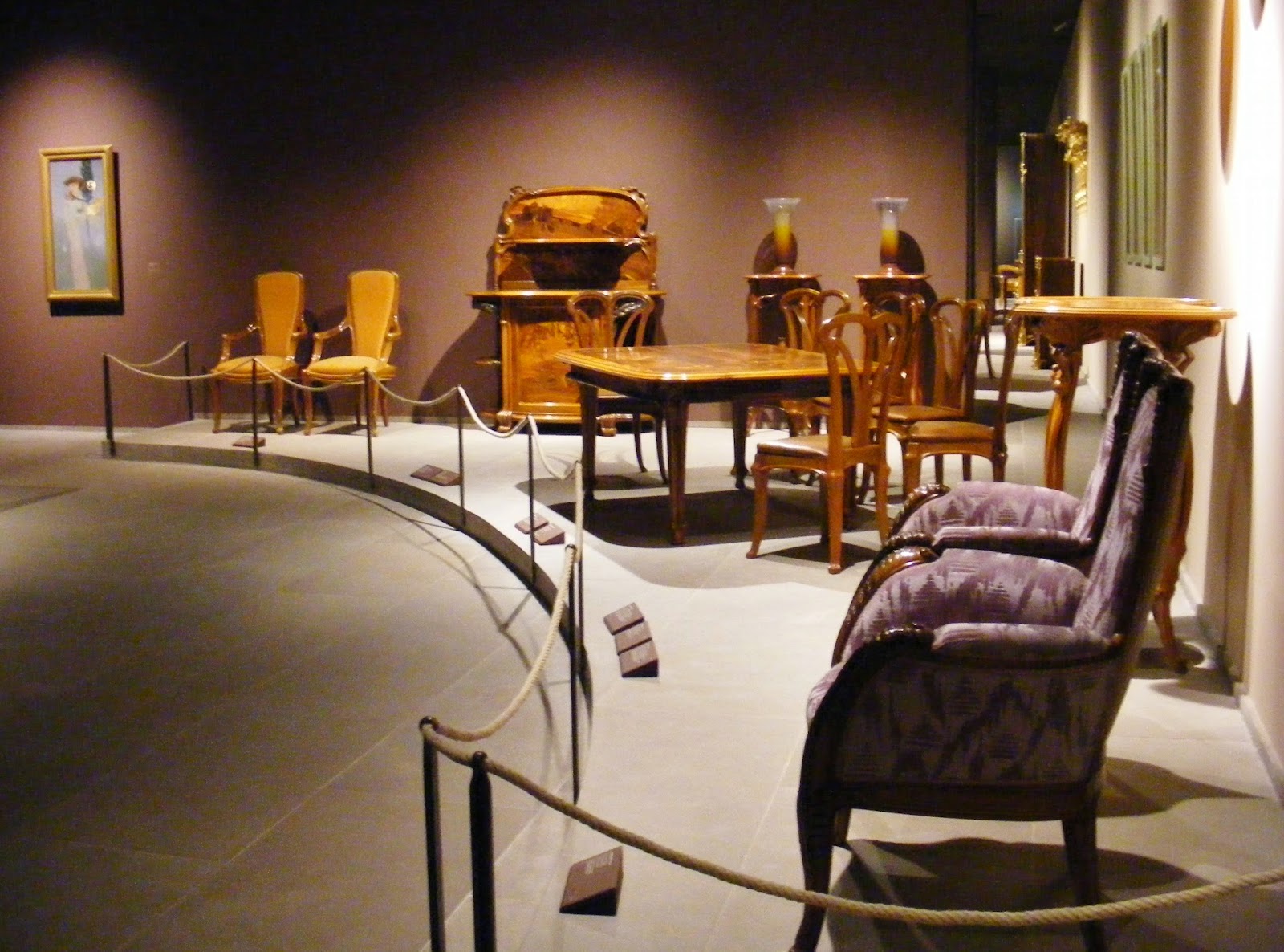 That final level also has a collection of furniture and house decorations that would make a fan of Art Nouveau swoon.  A fireplace facade by Jean-Désiré Müller, a desk by Joseph Boverle... and the fantastic Gillion Crowet Collection with bronzes by Mucha, silverware by Follot, glass by Gallé and much more.  It just goes on and on.  A feast for the eyes.  And provides a three-dimensional break from the two dimensions of all those photographs and paintings.

In talking with one of the guards at the end of my visit, I learned that there is yet another level to this museum, but one not open to the public.  On that final level he said there was a grating under which you could see and hear a river flowing below.  In other words, you - and the museum - have traveled down through the entire hill, to its base and the underground stream that probably empties into the city's only river, the Zenne (unless it's already part of it), or into the Charlevoix Canal.
Given how many levels there are, you’ll be happy to know that there’s an elevator you can take back up to the exit-and-shop level at the end of your visit... and it even has seats in it.  It appears there’s also a café and a brasserie, but I didn’t see either.  Of course I’d spent far more time than I’d planned admiring the art collection and I was running late so I really didn’t look very hard.  They’re probably near the gift shop.
This museum has a lot to offer, so plan enough time to enjoy it fully. It’s roomy and quiet.  And the lighting is remarkable, which is a good thing because the darkness in these bowels of the earth could make the atmosphere feel almost claustrophobic at times.  You would be doing yourself a great service to visit the Brussels sister of the Orsay Museum in Paris.  Belgian artists often seem to be the poor cousins in the art world. So even if you think you know all about Impressionism, you’ll find artists here you perhaps didn’t know. 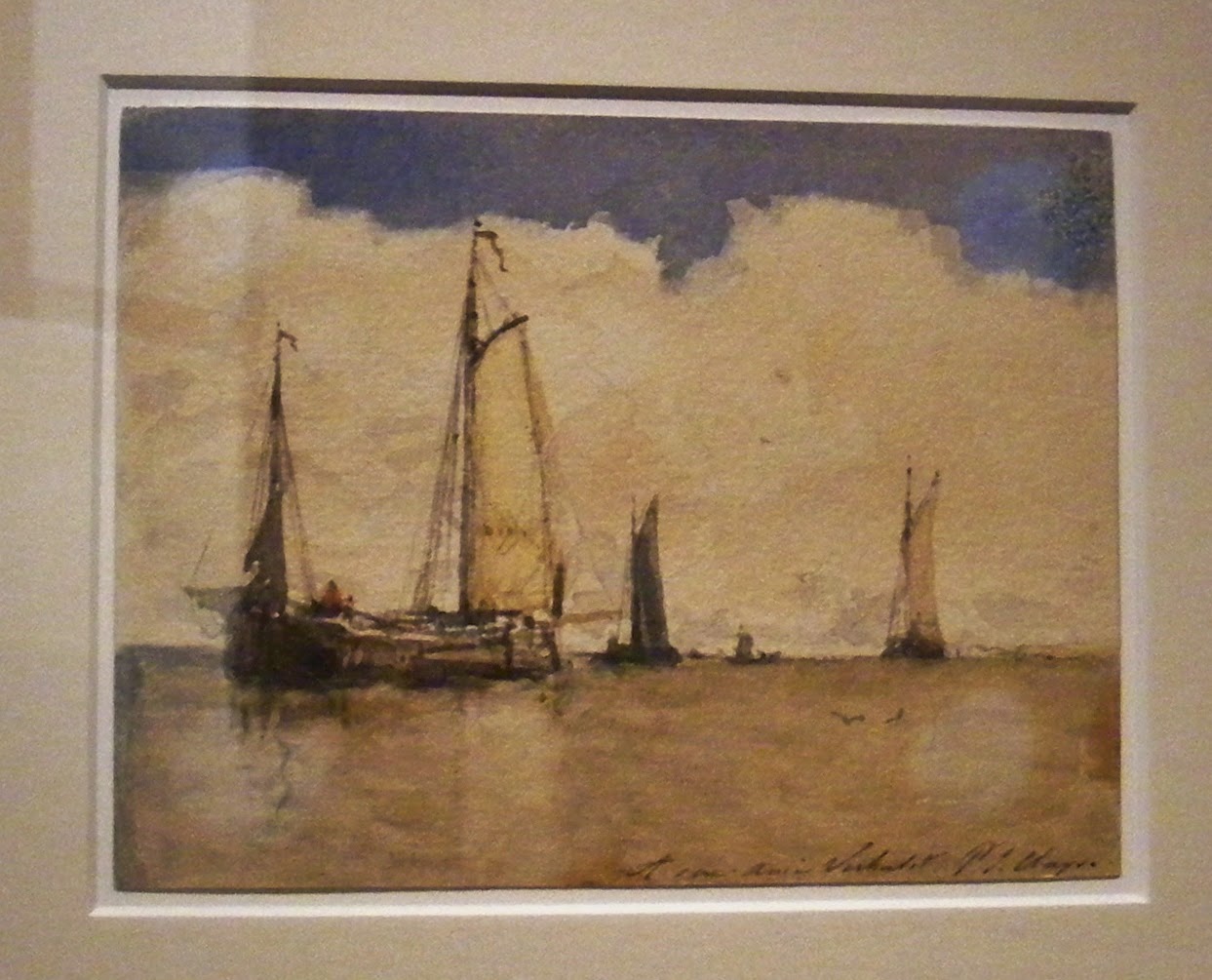