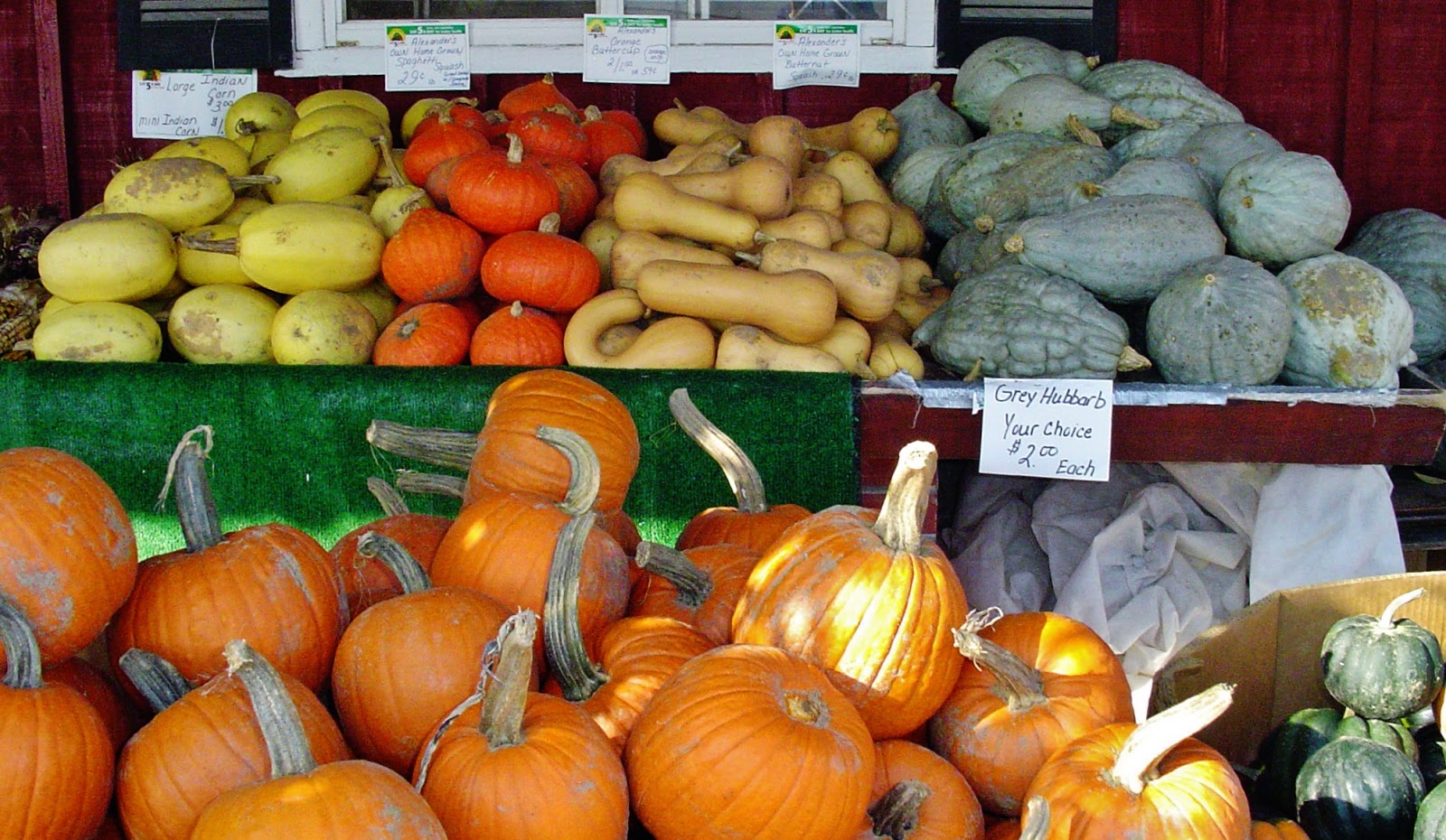 Once again it’s the Season of the Pumpkin:  Hallowe’en and Thanksgiving.
In America, “pumpkin...” is almost always followed by “...pie”.  But in France it’s not so much a sweet as a savory, used mainly for soups, and more recently in purée form as a side dish for roasted meats (as are carrots, turnips and celeriac).  The ones you want to use for baking or cooking are smaller and sweeter than jack-o’lantern pumpkins, and are called pie pumpkins, or sugar pumpkins, or sugar pie pumpkins. 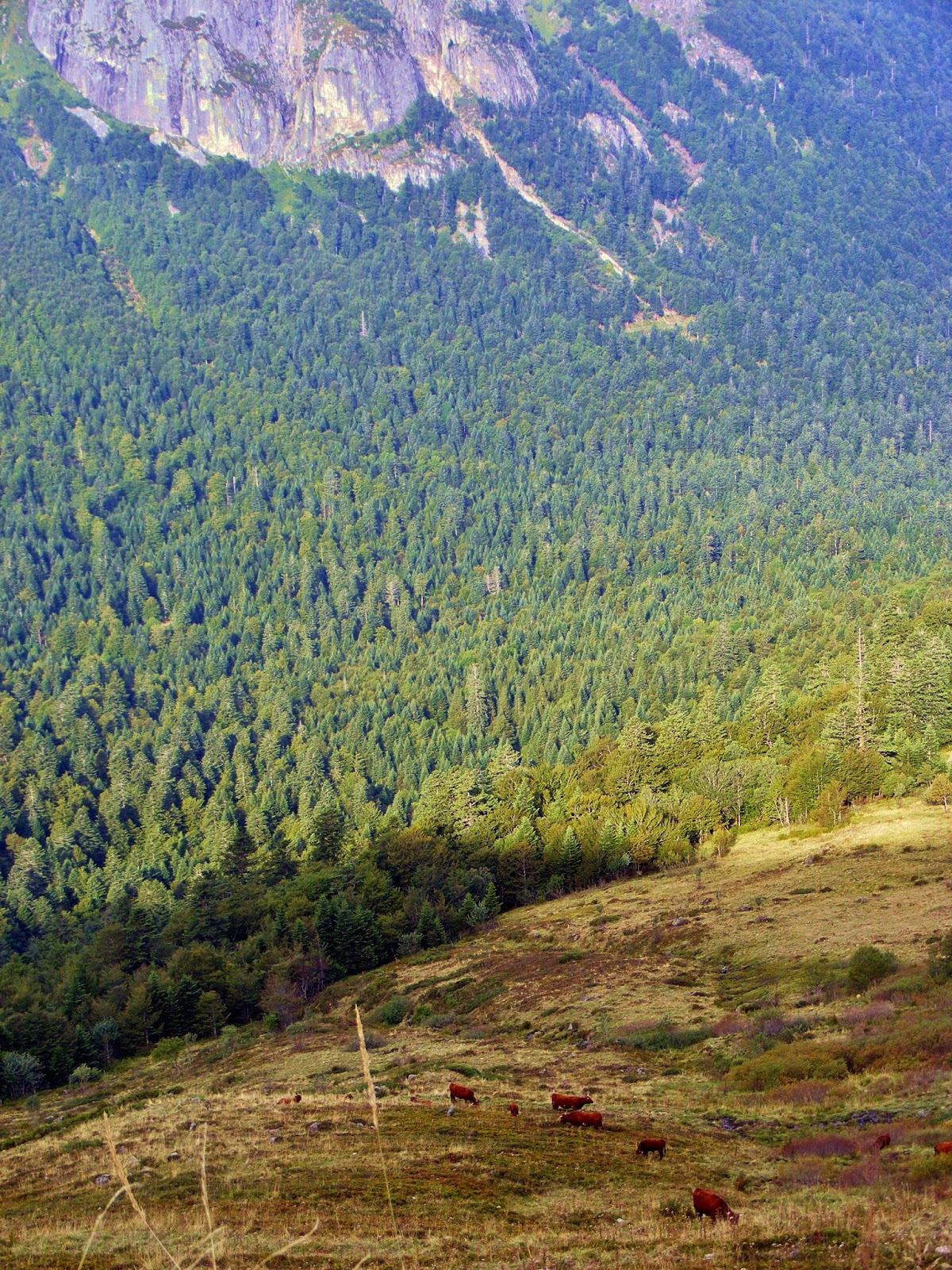 This recipe comes from Auvergne, a region in the Massif Central where volcanos - now extinct - once towered above the primal waters that covered most of the Earth.  It is a handsome land in the summer, covered with vegetation made lush by the ancient lava flows, a land where russet cows graze freely.  But in winter, with temperatures often the lowest in all of France, it becomes a hard place to scratch out a living, yet still strikingly beautiful with its robust houses of dark basalt walls and lauze stone roofs standing out against the snow.  It is traditionally a poor region, where people survived on lentils, cabbage, chestnuts and pumpkin.  Chef Roland Durand grew up on a farm in the Auvergne, one of seven children, and learned to cook with his mother.  Which may be why he loves these simple country recipes, the recettes de terroir.
So here’s his seasonal soup for that pumpkin you didn’t use for a jack-o’lantern.  It’s more a meal than a soup, thanks to its bread and melted cheese, the Auvergne version of the internationally-known French onion soup.  Perfect for chilly evenings, it’s guaranteed to be filling.  And served in its shell, it’s sure to be a conversation stopper.


- Preheat the oven to 375°F.
- Cut off the top of the pumpkin, saving the cap to use as a lid.  Scrape out the seeds and coarse fibers.
- Place the pumpkin in a rimmed baking dish and fill the inside with alternating layers of cheese and  bread.  Pour the milk/cream over the bread and cheese, filling the pumpkin to the top.  Add freshly ground pepper to taste.  (Cantal cheese is naturally very salty.)  Replace the cap on the pumpkin.
- Bake for 60 minutes.
- Serve by cutting the “bread/cheese melt” into sections and pouring the liquid over it.

Feeds four.
Accompany with a hearty red, such as a cahors.

This is an easy recipe to make in France.  In the United States, you can replace the Cantal cheese with a very mild Cheddar.  The Poilane bread can be replaced with any sturdy whole-wheat bread, provided it’s dry enough; or else you can leave the bread out overnight so it dries a bit.  And yes, this is a perfect recycling dish for bread that’s going stale (but not moldy!).