Recipe of the Month: Crêpes 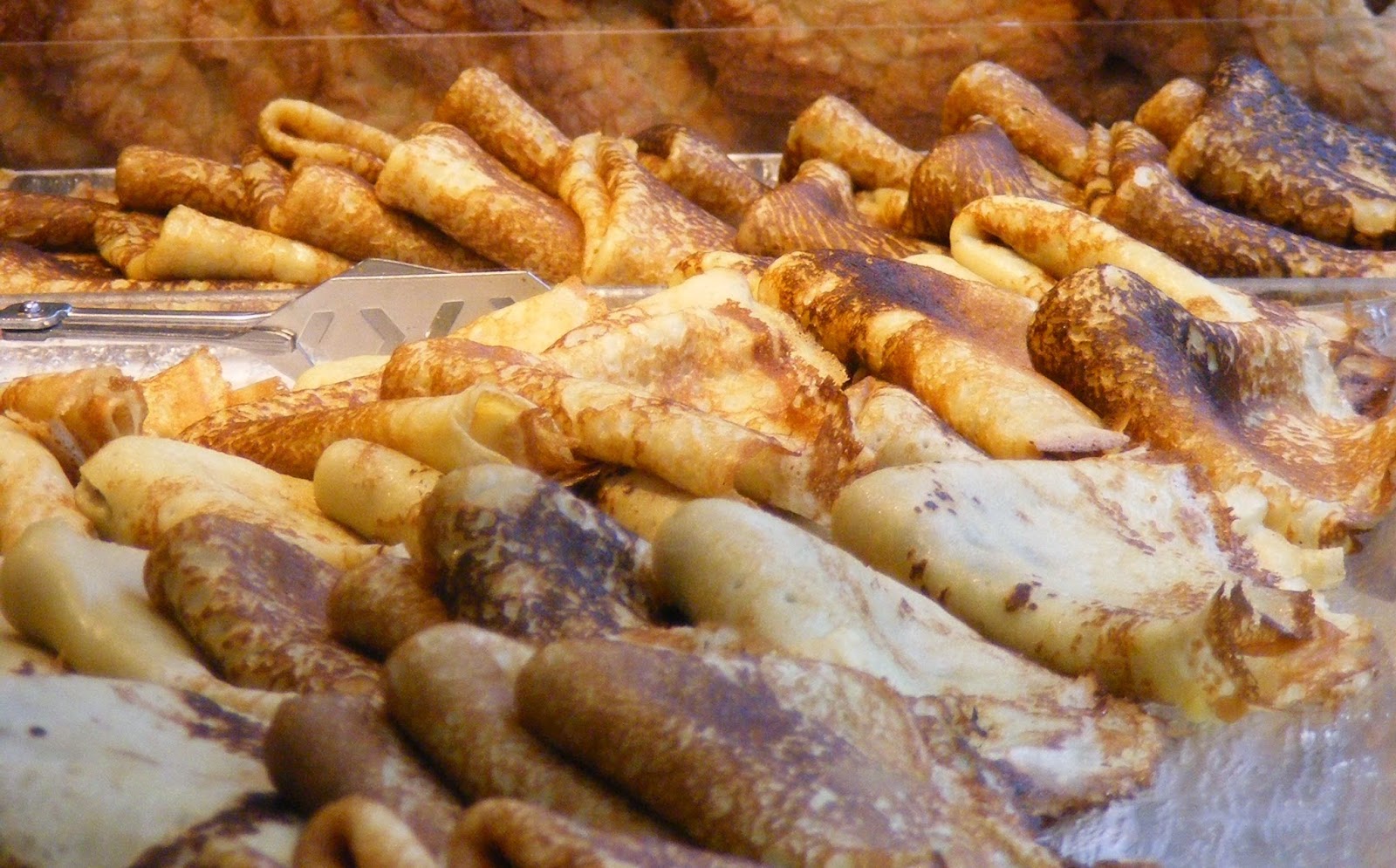 When I was a child, I heard of something called Crêpes Suzette.  I didn’t know what it was, other than a dessert (which made it of obvious interest), but I imagined something sweet somehow involved with a woman named Suzette, who was surely dark-haired and very beautiful because she was foreign.  Then one day I learned that crêpes were only thin pancakes - minus the maple syrup - and that Suzette was just the name of the very small girl present when they were served for the first time.  AND that the whole thing was, in fact, an accident in which the liqueur-soaked crêpe sauce accidentally caught fire in the kitchen.
So much for the exotic Suzette and her crêpes!
All over France you’ll find crêpes at sidewalk stands.  Their aroma and warmth are welcome in the cold grey drizzle of a Paris winter.  It was always a treat for my children on the way home from school.  Most French crêpes are served with just a smear of butter and a sprinkle of sugar, or with jam - usually strawberry or apricot - but sometimes with chocolate or hazelnut spread or crème de marron (a sweet chestnut spread).
This recipe comes from my Paris neighbor Nicole, who says, “My recipe doesn’t come from Suzette, but from a certain Janine, a friend of my mother.  It makes 15 crêpes.  One big advantage:  it doesn’t have to be made ahead of time.  You can whip it up at the last minute.”
However, you can make a crêpe batter up to two hours in advance and then cook the crêpes when your guests arrive.  Or you can cook a stack of them and keep them warm in the oven.  Dress them up with your favorite topping, flame them with a liqueur, or add dollops of whipped or ice cream and a shower of sliced almonds.  This recipe calls for rum but you can use anisette (anise flavoring), Cointreau or vanilla extract or any other liqueur or flavoring you like.  Plus citrus zest to give it some zing.
This is the traditional way of making crêpes.  Julia Child just bungs everything in the mixer for 1 minute and strains any lumps out, but her batter has to be made 2 hours in advance (and left in the refrigerator).
I’m posting this as February’s recipe because the 2nd is the Chandeleur (shahn-duh-luhr), the festival of the candles, which has been celebrated since the 7th century.  The tradition is to hold a gold louis d’or coin in one hand and flip the crêpe with the other.  (A silver dollar might work this side of the Atlantic.)  This will make you a) rich or b) grant the wish you made as you flipped your crêpe. 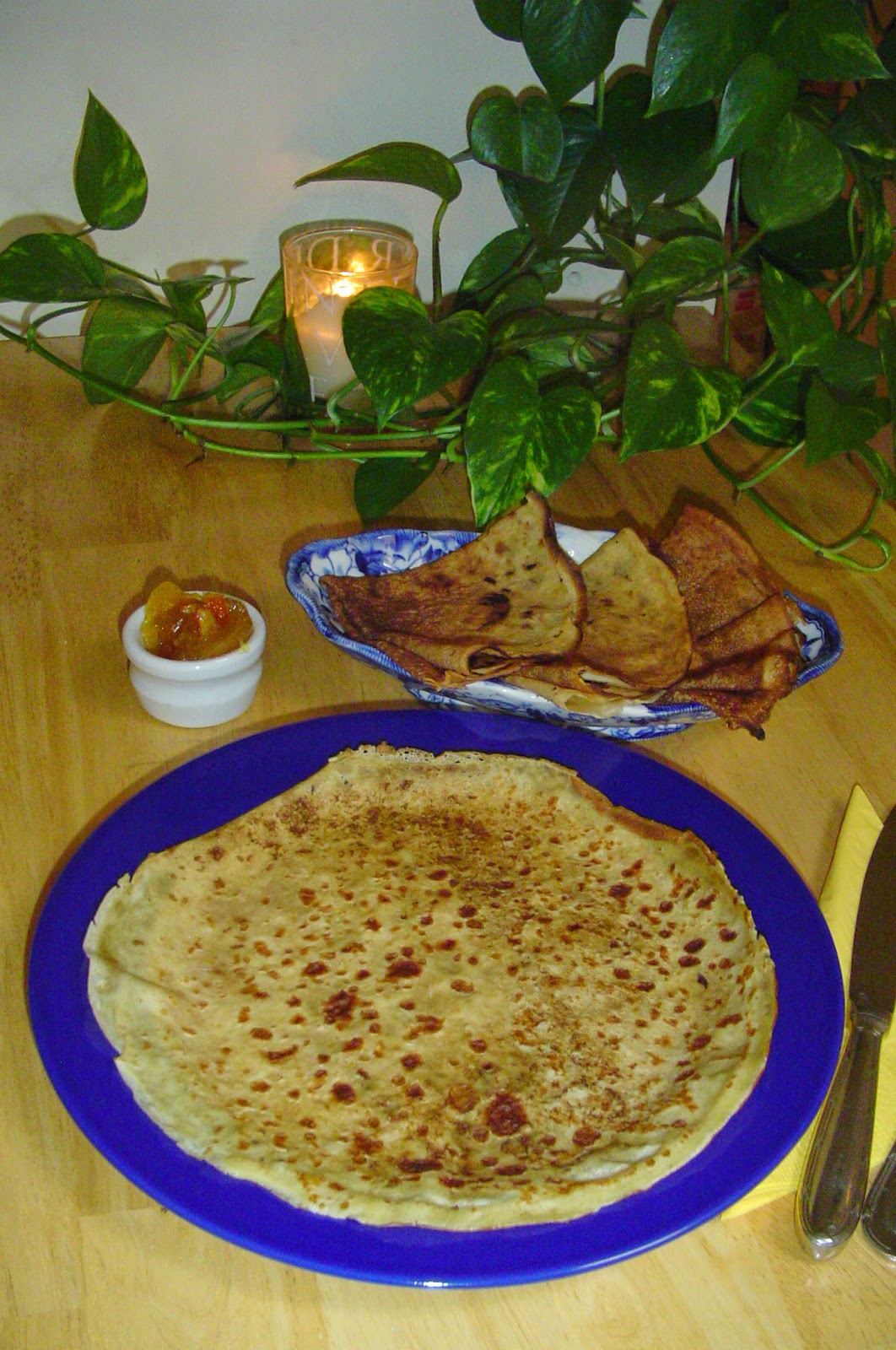 - Heat the milk to a boil.  Take the milk off of the burner and add the [melted] butter.  Leave it to cool.
- Put the flour in a large bowl.  Make a “well” in the center of the flour and break the eggs into the well, one by one.  Whisk well.
- Add a pinch of salt, then the water, then the flavoring (or zest).
Slowly stir in the cooled milk.  The batter should have no lumps, or else you need to strain them out.


Thanks, Nicole.  For those of you who have never made crêpes, here’s the drill:
- Stir the batter before making each crêpe.
- Pour a small “ladle-ful” of batter into a hot, well-greased crêpe or omelet pan, tilting the pan until just the bottom is thinly covered.  Remember:  these are not pancakes.  The crêpe should look almost like lace.
- When the edges start to brown, run a spatula knife under the crêpe, from the sides in, to make sure it doesn’t stick.
- Toss the crêpe to flip it and let it finish browning.

Don’t cook the crêpes too much; they should be golden, like the sun that they may once have represented at this half-way point of winter.

And don’t worry if your crêpe sticks to the ceiling or the cupboards when you flip it.  At least the first one.  In the old days, the French said that if it was still stuck there in the autumn, you’d have a good harvest. 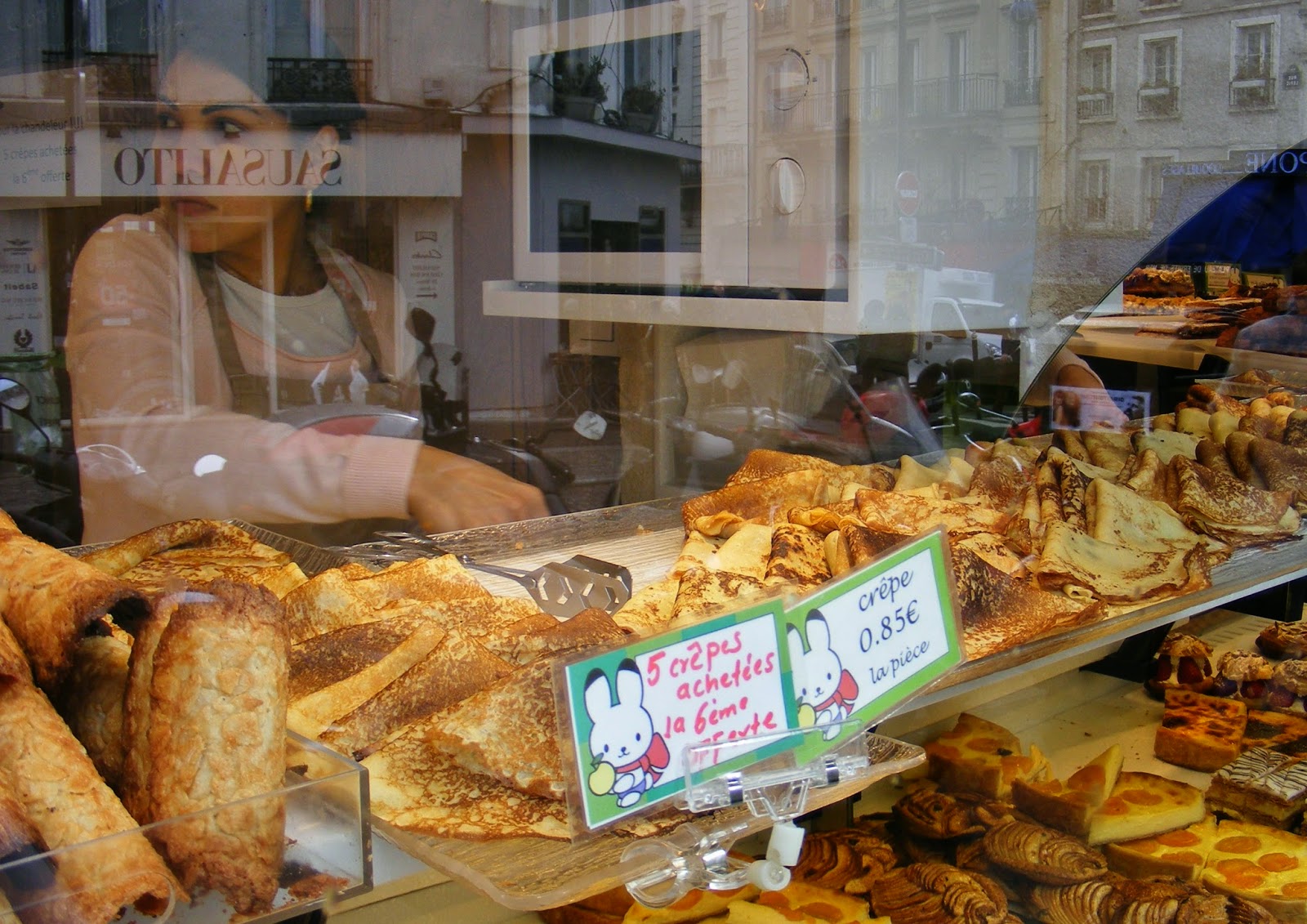