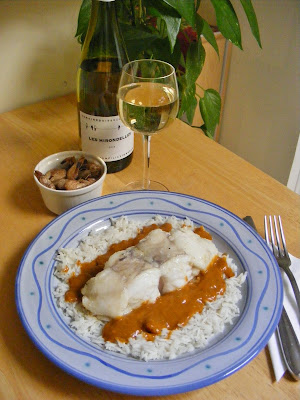 It’s a well-known fact that the French will leave the heads on anything. Chickens and their dangling heads hanging on hooks in the meat market, alongside little bunny rabbits with all their fur (and heads). Fish with their heads at the fishmonger’s, or right there on your plate in restaurants.  Sometimes you even see a whole calf’s head at the butcher’s. They’d be capable of putting an entire cow on display if they had the room, but mercifully they don’t.
Monkfish is the only thing they never leave the head on.
And there’s a reason for that.
Have you ever seen a monkfish head?  Well, I hadn’t either, so I looked it up.  It’s positively prehistoric!  (Caution: If you’re pregnant or accompânied by a small child do not look up the photo.  You might have a miscarriage.  Or be woken up for weeks with the child having nightmares.  You have been warned.)
In spite of its hideous head, or maybe because the Good Lord felt so sorry he’d made them so ugly, the body of the monkfish is delicious.  As dense as many meats and very flavorful.  Kind of like a fish steak, and not very fish-y tasting, so if you don’t like fish in general, keep an open mind here; you might surprise yourself.
Monkfish is called lotte in French, and I’ve eaten a lotta lotte since I moved here.  At first it seemed to be always written on the menu as lotte à l’armoricaine.  Ar-mor being the Celtic name for the coastal area of Brittany, that sounded logical.  Coast.  Fishing.  Monkfish.  But then I started seeing it as lotte à l’américaine.  By then I’d learned French food snobs felt that anything américaine usually involved ketchup.  As there are indeed tomatoes in the recipe, it was logical, I guess.  And maybe some French food snobs weren’t as intelligent as they thought they were and had no idea what armoricaine actually meant, so they thought it was a mistake for American.
Now I love America, but I’d prefer to think of this dish as Breton because that’s probably where I ate it for the first time... or maybe it was only in the Paris neighborhood around the Gare de Montparnasse, where all the Bretons arrive by train from Quimper, Brest, St. Malo or other Celtic ports.
So lotte à l’armoricaine it is, and shall remain.  (Especially as the recipes I found for both seem extremely similar, if not identical.)  Here’s the recipe. 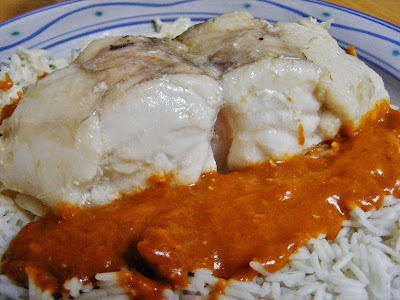 
- Peel and dice the shallots.  Peel and press the garlic clove.  Peel the pearl onions.  Open the can of tomatoes and cut them up.  Dilute the tomato paste in the white wine.
- In a cast iron pot, heat the butter and oil and cook the monkfish over medium-high heat until it starts to turn golden.  Add the cognac and light it (flamber).  When the flames have gone out, remove the fish to a serving plate.  Turn down the heat, put the shallots and all the other ingredients - except the crème fraîche -  into the pot, salt and pepper to taste and let simmer for 20 minutes, uncovered.
- Place the monkfish into the sauce, add the saffron, cover and let simmer for 20 minutes. If the sauce is too liquid, add a little bit of cornstarch or arrowroot to thicken.
- Remove from the heat and at the last minute, blend in the crème fraîche.

Accompany with rice or steamed/baked potatoes.
Serve with a dry white wine, if possible the same as used in the recipe