Who Are the People in Your Neighborhood


How you pick up your take-out in my neighborhood

After a major visit to the oral surgeon yesterday, it seems wise to eat Soft Stuff.  Which makes me immediately think of nouilles Pnomh Penh, a noodle dish (with little bits of Cut-Up Stuff) from the tiny Cambodian restaurant downhill.
So off I go. 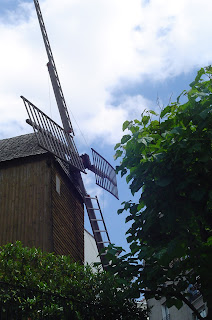 In spite of the warm sun, I'm glad I have a sweater because in my street there’s often a lot of wind.  And today is one of those days.  Japanese girls at the corner are buttoning up and looking somewhat like Marcel Marceau’s Bip walking into the wind.  There is a reason why the windmills were up here, near the top of the hill.  Walking on, it’s still blustery on the square, where my mild-mannered friend the accordionist is playing very Parisian melodies, as he always does around noon.  And true to form, once across the square and down those ten steps, the wind becomes... non-existent.  Talk about a mini-climate. 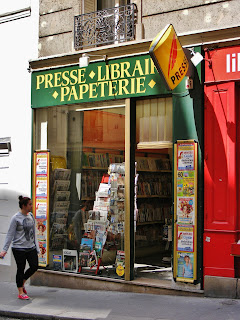 First stop:  the little shop that sells newspapers, magazines, books and office supplies.  It’s Wednesday, the day that Pariscope comes out, a little magazine that contains everything going on in Paris all week:  plays, movies, concerts, lectures...
As I’m coming out, I see a little boy - couldn’t have been more than 3 or 4 - free-wheeling down the middle of the cobblestone street on one of those pedal-less plastic pre-tricycles only about a foot off the ground.  A man I’m presuming is his father runs behind him, trying to catch up, because... at the bottom of that street, only a few yards down, it feeds into the much busier rue des Abbesses shopping street.  To be fair, the kid ultimately has it under control and turns right, toward the curb of the sidewalk.  But as a mother, the whole thing doesn’t seem like a very well-thought idea to me, although it probably is building self-assurance in the kid... if he ever makes it to adulthood. 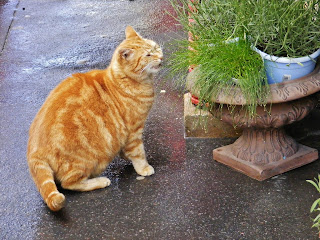 Across the street is a florist who was trying to buy me a climbing hydrangea for my mini-garden.  Without much luck, so I tell him to put it off until my next stop.  It would only die for lack of daily care after my departure, even though two of my neighbors water the garden for me.  New plants need constant attention at first, until they settle in.  As we talk, the ginger cat from the corner grocery ambles up to nibble at one of the feathery-leafed plants, all the better to "cleanse" himself when he gets back home.  (Cat owners will understand.)  Everyone just calls him minou, French for “kitty”, but he doesn’t answer to that when I try... or to le chat or even Hey Cat!  Too busy eating the young florist’s plant, which doesn’t seem to bother either of them very much. 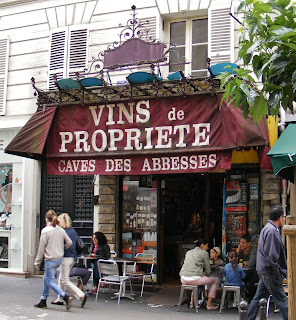 Further down the rue des Abbesses, I stop in to say hello to my friend Manu, the Cave des Abbesses wine purveyor (See Sandy’s France, Feb. 23, 2013).  There’s a whole line of young people, some with babies strapped on in the hippy fashion, waiting to get in.  Then I remember that an American ex-pat has created a weekly event in the backroom bar, something an old friend of mine created out of a storeroom some... oh... 25 years ago. There’s barely time for the two-cheeked kiss before Manu has to put in an appearance, so I head on down the road, noodle-bound. 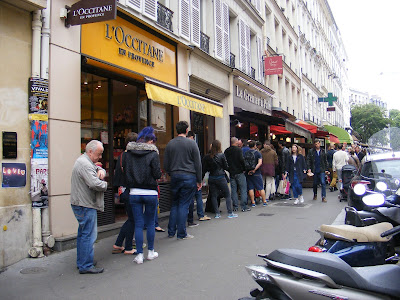 As I said, Le Cambodge is a tiny place.  Seating for 24 inside, around the display counter.  And when the sun is out three two-chair tables outside the front door, now that the sidewalk has been widened.  The owner greets me, in English, which he is determinedly trying to learn.  When his vocabulary runs out, we switch back into French, until the paying and good-bye part, which he’s got down pat in English.  He hands me a gift as I leave, a little container of sesame seed candies.  It’s the gesture that touches me.
He and I have known each other since he opened this restaurant.  His hair is much greyer now. One day, when there was no one else around - and he was probably sad and maybe lonely for some reason - he told me about walking out of Cambodia all the way to Thailand.  His country was under Lon Nol’s murderous government then, and he had been separated from his family.  He was 7 and totally alone in a camp.  One day he just started walking.  Someone had pointed in a direction and told him Thailand was that way.  “Didn’t anyone stop you?” I asked him, amazed.  “I was just a little boy.  No one even saw me.”  As my architect friend would have said, “He didn't appear on their horizon.”  Distant uncles in France recovered him from the refugee camp in Thailand and brought him to France, where he ultimately opened this little place in my neighborhood, and I became a regular.  He has seen my children grow up, and I his.  That was 30-some years ago.
I decide to take a longer way home, one with a gentler slope.  The ascension of Montmartre by the East Face.  And that takes me past the couscous restaurant.  Again I stop in.  I’ve known this place for at least as many years as the Cambodian one, back when the father owned it.  When he passed away, his son inherited it.  A totally different personality.  Far more effusive than the reserved but warm father with the gentle smile.  “It’s been a long time,” he chides me.  And it’s true that I haven’t been here yet this stay in Paris.  Maybe when my American friends arrive Friday.  His wife has been very ill with ovarian cancer and had to undergo surgery and then chemo.  She’s not here yet today for the lunch service, but she’s back at work after many, many months in bed.  With three boys, one still in middle school, and a restaurant to run, she would be sorely missed.  And her radiant smile would be missed by us all. 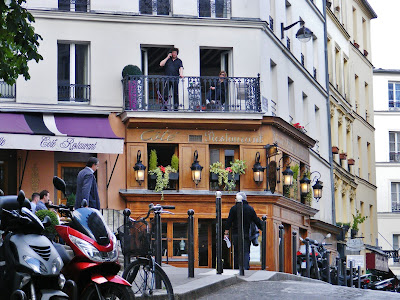 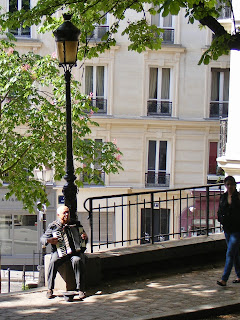 As I arrive back at the Café at the Foot of the Ten Steps, two different Oriental women are taking photos.  I ask the bemused waiter as I pass how many photos that makes.  He tells me he’s lost count.
And as I cross the square, now devoid of accordion music, I encounter my neighbors off to lunch somewhere, husband, wife and golden retriever.  We shake hands and wish each other“Bon appétit!”
Montmartre is a village.