Out and About: The Cité Universitaire

This week-end is the Journées du Patrimoine - Heritage Days.  France has many buildings that are not open to the public, or where some parts are off-limits.  Today a lot of them are going to be open to anyone with patience.
The Palais de l’Elysée for instance - the residence and offices of the President of France - as well as the Sénat and the Assemblée Nationale - the two houses of France’s government.  You could choose to visit some of the ornate, centuries-old residences of various foreign ambassadors, such as that of the Ambassador of Poland.  Or stroll through the Banque de France... but not its huge safe deep underground where the country’s gold bullion is hidden.  Or go pet the horses of the President’s honor guard, the Garde Républicaine, at their stables near the river.
But all of those will involve waiting in long lines, and as I haven’t found a victim to stand in line with me, that could prove very boring.
So I decide to go see something I could have gone to see any time since first arriving in Paris in 1968:  the Cité Universitaire.

What is the Cité Universitaire?  It’s the residential campus of the various Universités de Paris, which were all one university until the Student Riots of 1968.  It grew out of the horror of World War I, “to promote peaceful understanding between students, researchers and artists of different nations”.  And it was also needed to counter the housing crisis of those post-war years. 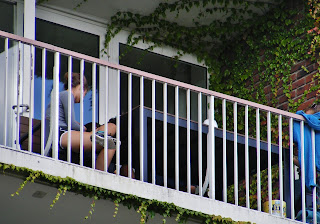 The first buildings opened in 1925, on land that lay beyond the avenue circling Paris on the south, where the city’s fortifications had stood.  It groups 6,000 students in 40 different “houses”, many of which were intended initially for a given country.  Japan, Canada, Spain, Sweden, Greece Argentina, Holland, Switzerland and the United States all had their own as of the early years.  Iran built its structure in 1969, under the Shah, on the last lot remaining. 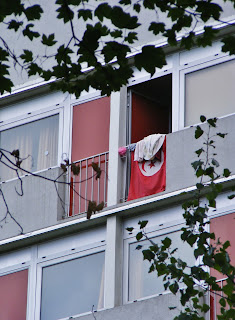 In the center, at the entrance, is the Maison Internationale, built largely with funds provided by John Rockefeller Jr.
Recently Paris has granted additional land to the Cité and three new national buildings will go up, the first promised to South Korea. Plus a very modern unit for the Ile de France, the region including Paris, already under construction using green technology.

I head off downhill to the Métro and then transfer to the fast cross-town B-line to the south border of Paris.  It only takes half an hour.  The Cité is right across the boulevard from the Métro.  All you have to do is run the gauntlet of the new modern tramway line that now circles most of Paris on its municipal border.  The tramway also separates the Cité from the Parc Montsouris, a municipal park with 38 acres of English landscape gardens, lawns, a small lake and miles of paths.  Perfect for a student who is easily distracted.
The weather is good and the sun shining, which hasn’t been the case too much recently. In front of the Maison Internationale are carefully clipped box hedges in classic French style.  Inside, people mill about, some of them enjoying their 4 o’clock tea in the café, others chatting in groups on the terrace that gives out onto a lawn that would make any American college proud.  To the left and right of the terrace, tree-shaded walks lead to the different “dormitories”, each with a unique look although many are of the typical Ivy League brick style. 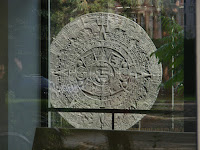 I choose the left and go down the steps, past families enjoying a bit of greenery inside the city.  (Definitely not students, these people.)  To my right is the House of Mexico, complete with depictions of Aztecs across its facade; there’s even a Mayan-style circular stone calendar in the courtyard (real or a copy?) - I can see it through the windows but the doors open only with a magnetic-strip pass key (as will be the case everywhere except the House of Norway, which is setting up for some sort of concert or presentation). Across from Mexico is the Foundation of the United States, one of the Ivy League look-alikes; no wall here to keep the border between the two “safe”!  Along this “street” are the Brits, the Japanese, the Spaniards, Italians, Swiss, then the Swedes, Danes (smaller country, smaller size) and Norwegians, all together in a kind of mini-Scandinavia.  Thrown in there for good ethnic measure are Morocco, India and Brazil... and that rounds out the left end of the campus. 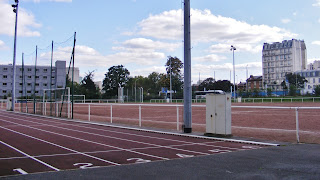 Running the entire length of the campus (a good three city blocks) is either lawns - where people who are or are not students enjoy the grass, picnic, play badminton or even dodgeball - or sports facilities.  From east to west, there’s a track for athletics, tennis courts, basketball courts, soccer goals and a full-sized playing field.  Anything a student wanting to blow off steam could ever want. 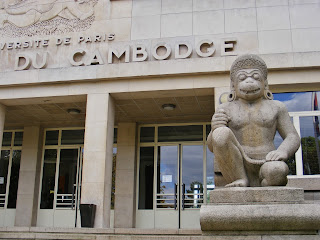 Beyond them are some other dormitories - those of Lebanon, Cambodia and Germany as well as one for engineers.  Here also the modernistic new building with green technology is going up.  And there’s still some room left for other buildings to come... but not many. 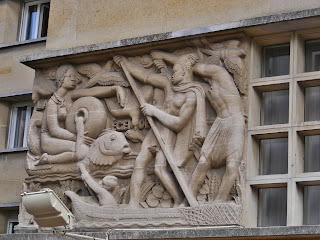 Working my way back to the Maison Internationale, I walk past the building that groups Southeast Asia, one just for Holland, one for Greece, another built for Cuba, and yet another for all the provinces of France. There’s one for Tunisia and one whose carvings are definitely sub-Saharan African, probably for France’s ex-colonies.  Closer still to my central starting point is the House of Canada and another building for Argentina, in addition to a complex of semi-detached Oxford-cum-Cambridge buildings that were part of the original campus:  the Fondation Deutsch de la Meurthe, the very first building on the campus built with private funding from the family who would later become Shell Oil.


In these residences, rooms for mere students run 400-550 € per month ($450-615) but are only 11-18 m2 large  (118-194 sq ft).  “Each room offers access to a washbasin, a shower, toilets and a kitchen, within the room or on the same floor.”  Which means you may have to go down the hall to hose down, which is what I had to do in Stockwell Hall at the University of Michigan - it made for interesting conversations and budding friendships while brushing one’s teeth.  Post-doctoral researchers and senior teacher/researchers have priority for studio apartments, all of which have a kitchenette.  They’re much larger (ha!):  18-25 m2 (194-270 sq ft) for studio apartments for singles and 25-35 m2 (270-380 sq ft) for couples.  “Sometimes researchers are accommodated in rooms, but normally students have priority for this type of accommodation” (the lucky dogs!). 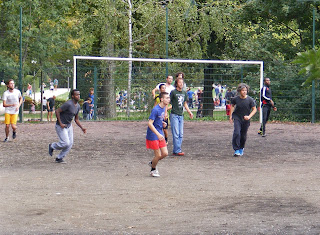 I would have liked to see a room or two, but I can see how students wouldn’t appreciate people poking their noses through the doorway and asking stupid questions.  So I’ll never know what their home-away-from-home actually looks like. 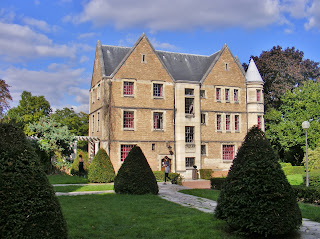 It appears that you have to be working on a masters degree to apply for housing here.  If you’re an undergrad, you’re on your own. And some of the buildings take people from any country.  The ones that stick to their own citizens are Argentina, Canada, Denmark, Spain, Italy, Morocco, Sweden and the United States.  I’m not really sure why, and there’s no one to ask today.
Besides, it’s almost 6 o’clock.  Time to head home.

As I get off the Métro back at my Montmartre starting point, I notice a familiar-looking pink headband on a little girl.  She and her mother were on the same Métro as me on my way out three hours ago.  We find we both live in the same neighborhood.
What are the chances in a city of two and a quarter million people?! 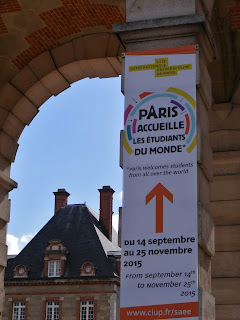