Every fall, Montmartre celebrates something that's part of its heritage: les vendanges, the harvest of the grapes.
Clos Montmartre is the wine made from what is billed as “the city’s last working vineyard”.
Although grapes had always been grown here, residential sprawl and then phylloxera destroyed the remnants of its vineyards in the early 20th century.  Lusted over by property developers, the one remaining plot was revived in 1933 by a group of local artists led by Francis Poulbot, a famous illustrator.  These artists petitioned the government to grant them the land so they could replant the vines.  Knowing that French law states that nothing can be built on a vineyard, they saved this small patch of nature from the builder’s shovel

After the grapes are harvested each year, they’re taken to the district’s City Hall, where they’re pressed, fermented and bottled in the basement - about 1,700 bottles squeezed out of the 1,900 vines of 28 different grape varieties (mostly gamay and pinot noir).  And sporting labels designed by local artists.  This has been done every autumn since 1934, except during World War II. 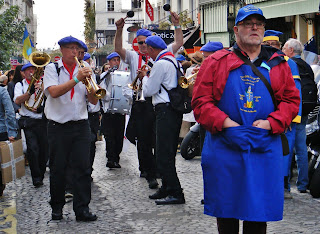 The steep vineyard faces north at the corner of the rue des Saules and rue Saint Vincent.  Not the best exposure for sun-loving grapes.  The resulting wine used to be called a pisse-dru, a scathing term which could mercifully be translated as a diuretic.  When I was asked Saturday whether I would like to try some - at a steep price of €50 for a 50-cl bottle - I said I already had, and smiled.  Evidently the wine’s quality has improved greatly over recent years under the tutelage of oenologist Francis Gourdin, who took over the vineyard in 1995.  Although some critics deem it “decent enough”, food writer Alain Neyman says politely, "You buy it for pleasure, as a souvenir of a fun event. (...) Recent bottles have become collectors' items."
The wine is auctioned off during the Vendanges festival and proceeds go to local charities, a tradition started by the artist Poulbot for the poor children of the Butte Montmartre immortalized in his paintings.
Each year there are harvest godparents.  The firsr godmother in 1934 was the legendary Mistinguett.  This year the godparents were model-cum-actress Mélanie Thierry and singer Raphaël, who form an unwed couple with a child in real life (see below).

Which leads us neatly from the reason behind the celebration to one of the most popular events linked with it since 2007:   the non-demandes en mariage, or non-weddings (thus the reference to Mélanie and Raphaël).  The idea comes from a famous song by Georges Brassens with the refrain, “I have the honor / of not asking / for your hand.”  This year you had to sign up before September 25th, which gave you time to decide whether you wanted to back out of not getting married.  The mayor himself officiates at your non-wedding, making it official.  And each year the number of couples who get not-married grows larger.
There was also a huge fireworks display Saturday night from the foot of the Sacré-Coeur.  In other words, from the playground right across from the building where my children grew up.  If we still lived there, we would have had front-row seats for a fantastic pyrotechnic show.  As it was, I benefitted fully from the noise a few blocks away but missed out on the light show, catching only flashes in the Paris sky.
It all ended Sunday night with a ball from 5 to 8 pm at the same place as the previous night’s fireworks.  The music was international, reflecting this year’s planetary theme.  There were biguines from the French West Indies, cumblas from Colombia, boleros and rumbas from Cuba... everything down to the Good old Parisian Apache dance. 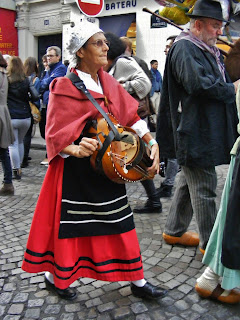 Other events?  Well, during the week one of the professional high schools that train young people for jobs in industry - this one the hotel industry - offered up a meal.  There was a party with a mini-parade where the children dressed up like Saint-Exupéry’s Le Petit Prince, The Little Prince, one of the key literary works that talked about saving the planet long before it became Touchy-Feely to do so. There was a song-fest by the elementary school children of the arrondissement:  900 chidren this year, which is quite a chorale.
Of course there were booths scattered around the area, handing out samples so you could taste the specialties that make France delicious.  Wine, of course, but also pâtes, cheeses, chocolates and other goodies such as cotton candy, which the French call barbe à papa - Daddy’s beard.  There were also balloon sellers and even a balloon sculptor making those balloon giraffes and dachshunds children so love.  A wall 200 meters long covered with murals by local artists.  A public ball, including Bollywood dancers when the French dancers get tired.  And of course speeches, starting with the one in the vineyards already stripped of their grapes. 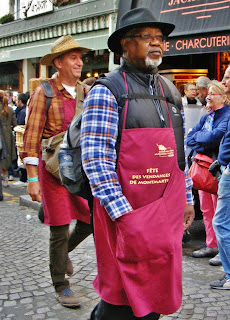 Plus the parade that snaked through a lot of Montmartre.  In it were wine-connected groups from all over France, as well as one group focused on strawberries and another on melon, those small, flavor-packed cantaloupes from southern France.  And there were musical groups, many with a Brazilian sound, but as always a  biniou group from Brittany, blowing on the Breton version of the bagpipes.  This year’s participants included young people from Japan dressed up in kimonos and a group from Ukraine who looked really happy to be elsewhere than back home.  But the stars of the parade are the P’tits Poulbots, the drum corps of children and teenagers, Montmartre’s vintage way to keep its kids busy and out of trouble.  And these kids can drum!
The Vendanges is the Big Moment for Montmartre, event-wise.  A bit kitsch, for sure.  But we’ve learned to grin and bear it, and even embrace it.  And then we rejoice when all the additional tourists, Parisian and foreign, go home and leave us to our Butte.
But the children enjoy it, especially the balloon-and-candy side of it. And it’s only once a year. 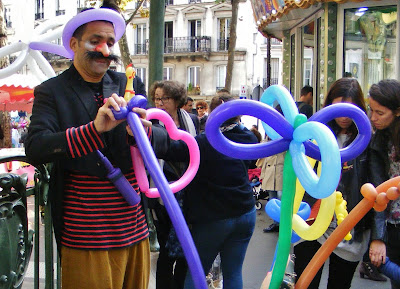