Out and About: Journée sans Voiture 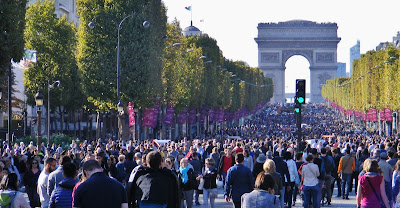 Last week-end was Heritage Days, Journées Patrimoine.  This Sunday was No Traffic Day, Journée sans voiture.
And given the traffic in Paris, even on a Sunday, the latter was probably more of a stress on the city than the former.  Because it consisted of blocking automobile traffic from whole sections of town from 11 in the morning until 6 p.m. 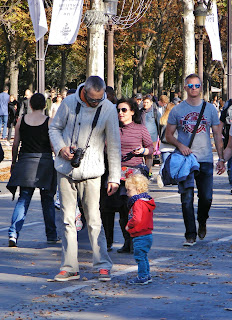 The sky was a lovely blue, so once I got my errands and house-cleaning done, I decided rather belatedly to see how it was going and what success it was having.
Again I jumped in the trusty Métro and headed for what would probably be the most potentially problematic place:  the Champs-Elysées.

Now the No Traffic Day maps said that the whole center of the Right Bank would be car-free, from the Seine River on the south to the Bastille on the east to the Grands Boulevards on the north and the Opera/Madeleine on the west, with a tentacle stretching west up the Champs-Elysées and another tentacle north along the Canal St. Martin.  (The Left Bank was also pedestrian from the arching Boulevard St. Germain to the river.) 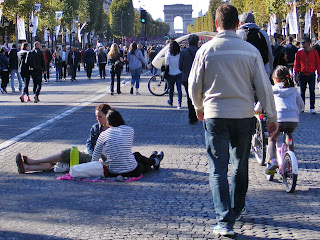 I decided to get off the Métro at Madeleine, so I could take a photo from the middle of the street down to Concorde and another up to Opéra, a feat that would normally get you run over in, oh, five seconds, guaranteed.  With no traffic, it would make for fantastic shots!  But as I came up the steps, I distinctly heard car traffic.  And when I reached street level, there were cars, albeit moving slower than usual, all around the Madeleine and up and down the boulevards leading in both directions.  So much for the fantastic shots I would get.
So I walked down the Rue Royale to the Place de la Concorde, cars traveling in both directions.  When I got there, my illusions of taking a photo from the Obelisk in the center of this vast plaza up what’s touted - by the French at least - as the World’s Most Beautiful Avenue.  Cars were circling the plaza as they always do.  I looked at my watch, wondering if I’d lost three hours somewhere - in a time warp while on the subway, for instance - and the event was already over.  Perhaps the whole thing had been a bust and City Hall just gave up? 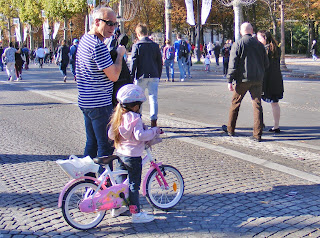 But no, police were preventing cars from turning into the Avenue des Champs-Elysées.  I heard drivers haggling with the officers.  “But I’m only going a few blocks!”  “Are you a taxi?  No, then you can’t!  It’s closed!”  And as I looked up the avenue - ten lanes wide and over a mile long - all I saw was a flood of people.  On foot.  On scooters (the foot-propelled kind, not the motorized kind).  Bikes, lots and lots of bikes.  The only thing motorized was one Segway (they can be rented at a Concorde stall on normal days) but the man on it seemed to be helping people with directions or other problems, so maybe he was sent by the Mayor Annie Hidalgo to do damage control.  Mostly it was just thousands and thousands of people walking.
I did something I’d wanted to go for decades; I walked right up the median line in the middle of the street.  It was kind of empowering.  I passed people sitting on the hallowed cobblestones; two women were even having a picnic.  Some young athletes had come with a goal and set up a soccer game.  Many children were there with Mom or Dad or Grandma or Grandpas to ride their pint-sized bikes on places where they would never have stood a chance of survival otherwise.  I’ll bet it’ll go down as a Red Letter Day in their memories. 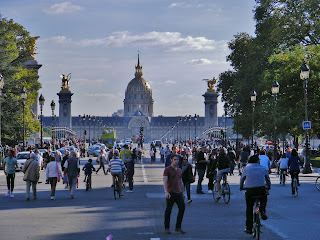 Halfway up the Champs-Elysées, I’d had enough of the crowd.  I thought I’d head down to the quais, the street running along the Seine.  But as I got to the Grand Palais, I saw and heard cars down along the riverbank, so I decided to call it a day.
On my way back to the Métro to head home, I saw one of the riot police in front of the American Embassy talking to a boy aged about seven.  In spite of his extremely lethal semi-automatic, he was smiling and answering a question, which might well have been “Have you ever killed anyone with that?”  He seemed to be in a good mood, so I asked him “Which do you prefer:  the cars or the people?”  He told me the cars were easier because there were far too many people milling about today to make him comfortable.  I hadn’t thought of it from that angle.
Then I saw an elderly lady standing, befuddled, just a few feet away on the corner of the plaza.  She was looking up and down, afraid to step off the curb.  I asked her if she needed help and she told me she wanted to cross the street but there were too many cyclists zipping every which way.  I gave her my arm and we walked across the busy intersection, then wished each other a good day and went our separate ways.  I hadn’t thought of how the chaotic anarchy of bikes and people and scooters and all could be disconcerting.  To me it was just people taking the streets back. 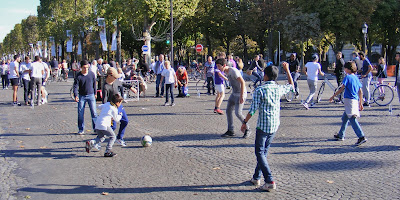 As far as I know, no one was run over by an errant bicycle, although I personally had a few close calls.  No police were hurt in the execution of this event, again to my knowledge, but there sure were a lot of unhappy motorists.
As for the rest of us, it was amazing!