Recipe of the Month: crêpes for La Chandeleur

Here's a reprint from a few years ago, to mark today:  February 2nd - La Chandeleur. 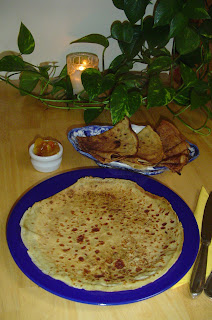 Although Paris is rarely as cold as Michigan, or even as other parts of France, the City of Light is resolutely grey and damp during the winter months.  Parisians are eager for any scrap of light or warmth.
Enter la Fête de la Chandeleur.  February 2.
As with so many feast days, this one has two sides to its story:  a Christian one and a pagan one.  Unlike the chicken and the egg, we know which came first.
Let’s attack the subject backwards.  The Christian holy day commemorates Mary bringing Jesus to the synagogue 40 days after his birth, as Leviticus required, him being the first-born son.  Later, the 14th century Catholic church linked this day to the Purification of Mary on February 2nd.  In both cases, candles were used to keep Evil at bay.  But that’s Chapter 2.  Let’s flip back to Chapter 1:  the pagans.
In France, the Fête de la Chandeleur is celebrated with crêpes.  And therein lies the link to the pagan side of the feast day.  Pagans worshiped the Sun.  Especially in the middle of winter, when cold winds blew and the sky was perpetually grey and it seemed like the Sun would never shine again to warm Mother Earth and breathe life back into Nature.  The Celts held a festival on the first of February where they walked through the fields, torches held high, asking the goddess of fertility to purify the earth and make it fruitful.  To bring back the Sun.  And what could better represent the Sun than a crêpe?  It’s round.  It’s pale yellow.  It’s warm.  And it’s nourishing.
Other pagans held a Festival of the Bear, which came out of hibernation around this time, much like Punxsutawney Phil, the groundhog who comes out - also on February 2nd - to see whether spring is here yet.  They, too, felt early February was a good date for a sun festival.  So there was already a long tradition of a feast day around this season when the Christians started to proselytize.
Winter.  Cold.  Dormant nature.  Lore mixed and melded with religion.  Out of it came a symbol that everyone, even the poorest, could adopt.  And the winner was the lowly crêpe. 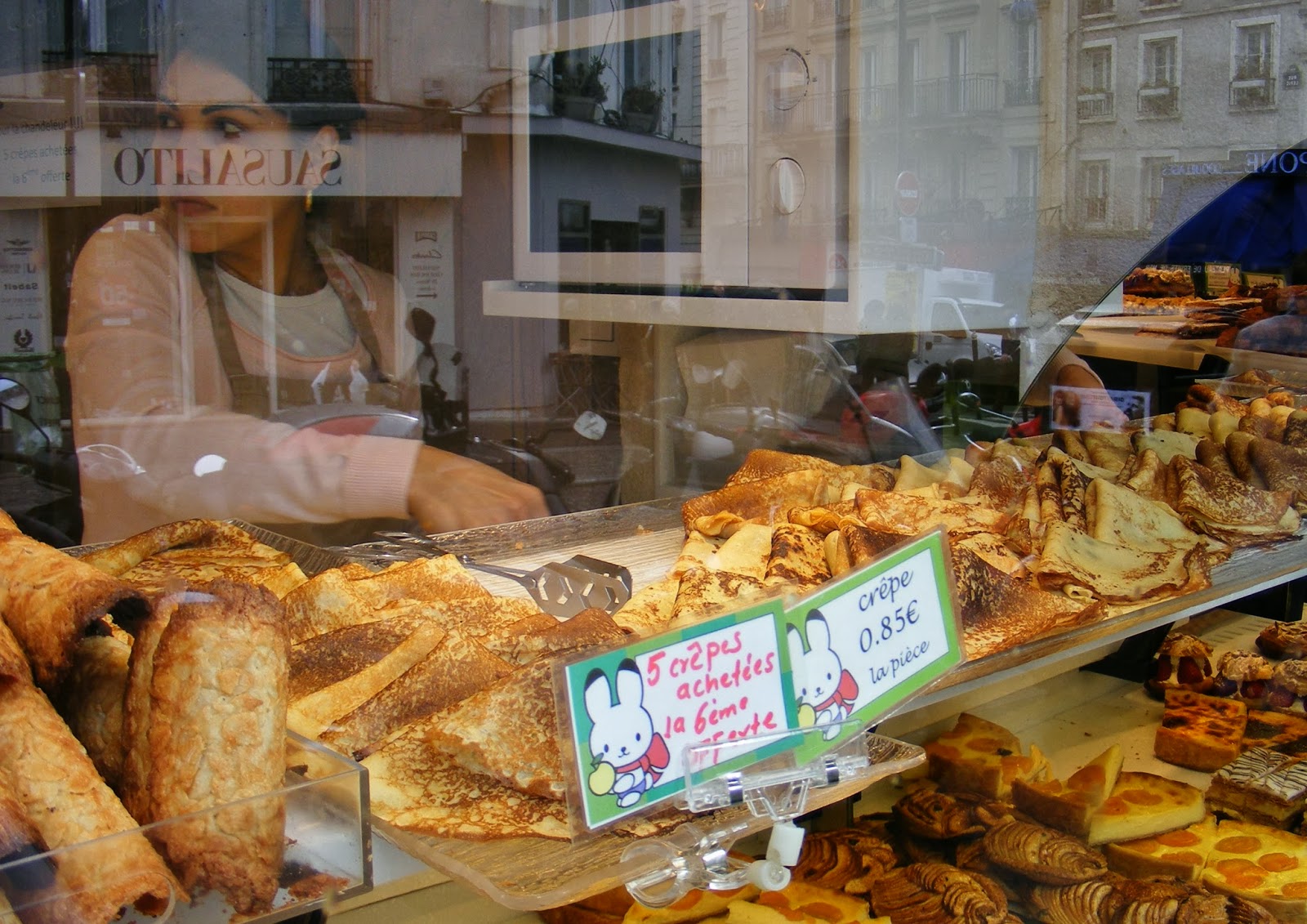 - Heat the milk to a boil.  Take it off the burner and add the butter.  Leave it to cool.
- Put the flour in a large bowl.  Make a “well” in the center of the flour and break the eggs into the well, one by one.  Whisk thoroughly.
- Add the pinch of salt and the sugar, then the water, then the flavoring (or zest).  Slowly whisk in the cooled milk.  The batter should have no lumps.  If it does, just strain them out.
- Let the batter sit in the refrigerator for an hour. 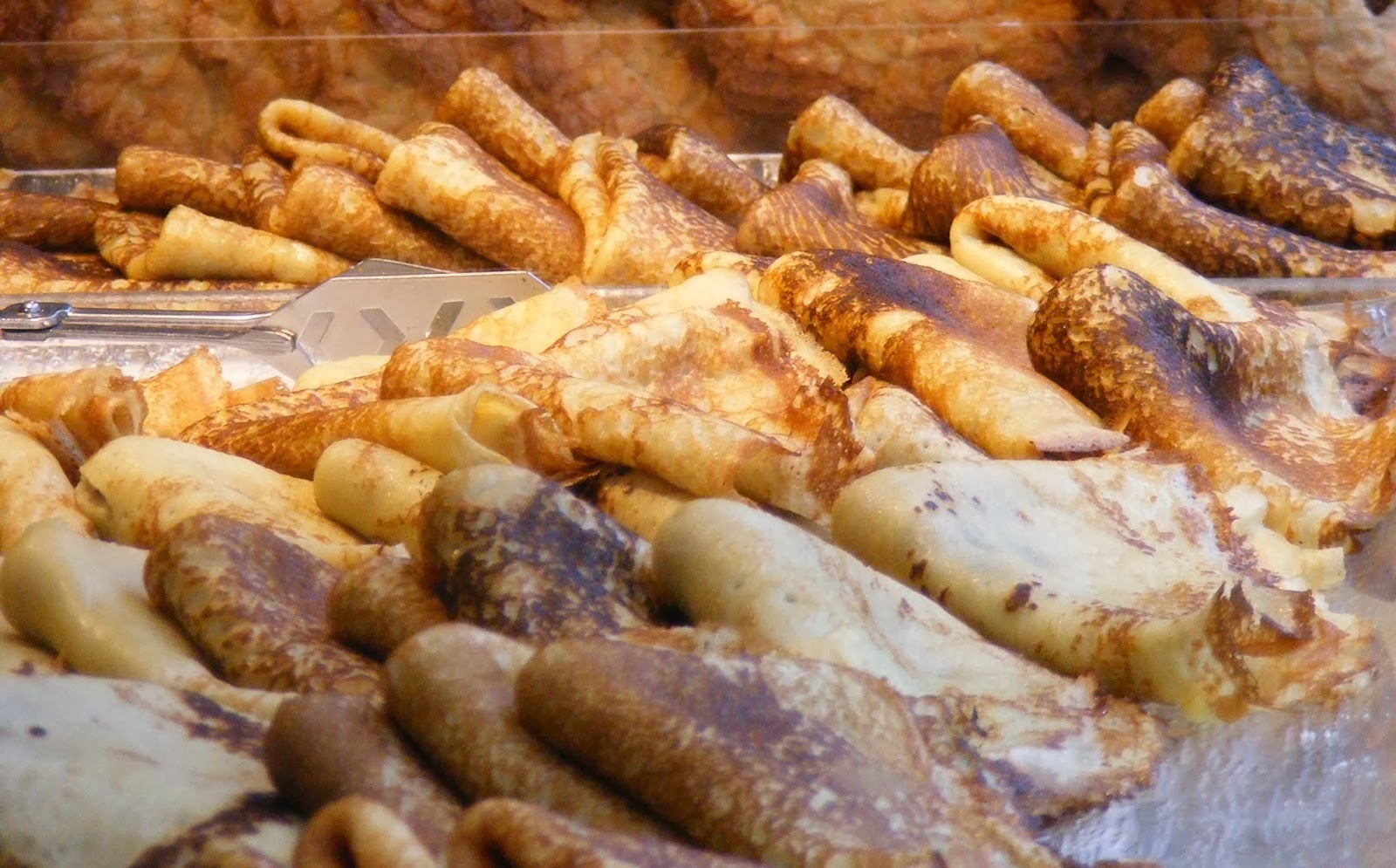 Now you’re ready to get down to business. Take an 8" frying pan (non-stick helps) and melt a little nugget of butter.  When it starts to sizzle, pour in just a ladleful of batter.  Make sure the crêpe is almost paper thin. Wiggle the pan around to fill in any holes.  As soon as the edges turn golden and bubbles form and start to pop - which is just about immediately - work it free with a spatula and flip it for just the few seconds it takes to finish up that side.  Sprinkle plain sugar over the top - or spread jam or Nutella... or dribble on a bit of Grand Marnier - and fold the crêpe in half and then in half again.  Eat it while it’s piping hot.
You can make a stack of crêpes ahead of time and keep them warm in the oven.  Then fold them as you serve them up.
But the French like to all gather around the stove and watch the show.  Especially as the trick is to flip them, not with the spatula, but with a flick of the wrist.  If you manage to flip your crêpe without dropping it on the floor or sticking it to the ceiling, and if you do it with a coin in your other hand (traditionally a louis d’or, but I doubt if you have any of those laying about), then you’ll have good fortune for the entire year.