Out & About: Maison de Balzac 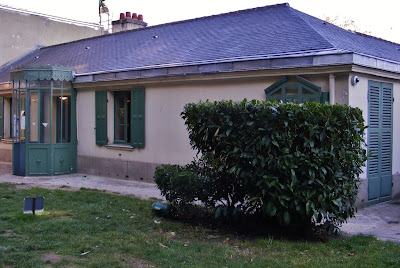 During all those decades I lived in Paris full-time, there were many places I never got to.  Why?  Because I was trying to hold heaven-and-earth together as a freelance translator/interpreter with two children to clothe, feed and educate.  Work came in, left, right and center, and when you’re working freelance you can never say no because you never know when the next job will come.  So spare time wasn’t really something I had a lot of. And when I did have some, there was usually a tennis tournament to applaud my son in or a gym competition to attend, watching my daughter hurtle herself in potentially neck-breaking feats of gymnastic agility that exceed my understanding.  Or there was food to buy, meals to cook, toilets to scour and...  Well, you get the idea.  Life.
So now I’m catching up.  And one thing I needed to catch up with was to go see Balzac’s house. 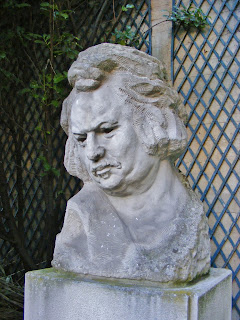 I’d seen Victor Hugo’s house on the Place des Vosges years ago.  It was chock-a-block with the famous author’s furniture and mementos. But Balzac isn’t Hugo.  He was never France’s national hero, and he was never financially secure.
As a matter of fact, what the Paris guidebooks call Balzac’s home was actually just an apartment that he rented in this modest house on a hillside in the Passy neighborhood, which was then still outside of Paris.  He lived here in five small, plain rooms from 1840 to 1847.  It’s the only one of his eleven Parisian residences that still exists.  Balzac chose this modest place to hide from his many creditors, even living under a false name:  Monsieur de Breugnol. His friends had to use a password to be allowed in, a password his creditors obviously weren’t given.  And if any of them did manage to sneak in, Balzac would scamper down the stairs and out the back door of the floor below. 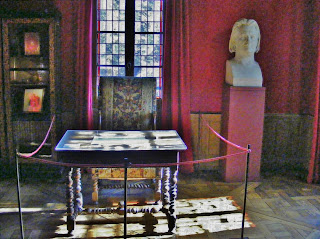 Of Balzac’s furniture, all that is left is his writing desk and chair.  The rest was sold off after his death, to pay those creditors. And that leaves the rooms looking a bit barren.  The desk and chair have been placed back in the tiny room where he basically wrote many of his best novels and much of his epic work, La Comédie Humaine - The Human Comedy.  In another room, there’s a huge document showing the convoluted “family tree” of its characters and how they’re inter-related. There are also pages of his manuscripts, with his corrections on them.  So it would be of great interest to Balzac scholars.
Furniture may be lacking but there are fireplaces and ceiling decoration in the rooms, as well as portraits of Balzac and his family:  his somewhat aloof mother, his agèd father, and his younger sister Laure, to whom he was closest*. There are also a few statues and busts of him throughout the rooms, and many first edition books written by him, although I’m not sure if they actually belonged to him.  For me, the highlight of Things Balzac-ian was his turquoise-studded cane, more flamboyant than elegant, and very reminiscent of the vanity of this famous author’s true nature. 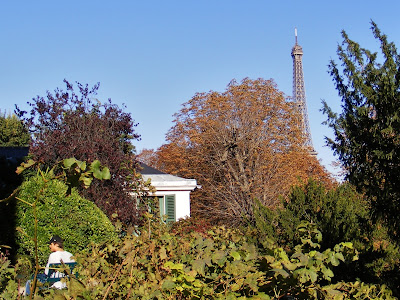 Outside in the garden, there’s another bust of Balzac.  And chairs to sit and enjoy the quiet**.  Not to mention a view of the Eiffel Tower - obviously not something Balzac would have seen, as it was built 37 years after he died. Balzac describes his years in this quiet house as being ascetic, but his abuse of coffee as well as drugs - not to mention his ample waistline and short nights - ended his life at a mere 51 years of age.
This ordinary house is difficult to reconcile with Balzac’s larger than life persona and profligate spending, but it provided him with the perfect setting to focus on writing his brilliant works.  And that, in itself, is something we should be thankful for.


*  The museum attendant heard my friend and I conjecturing as to who the Laure in the portrait was.  From behind our backs, we heard him say, “That was his sister.  They were very close.”  He went on to tell us other details of Balzac’s life.  This was clearly more than a job to him; he probably went home and Googled things about the author’s life and works.  How many museum attendants do you know who delve into the subject they guard instead of just making sure visitors don’t damage or steal things?
** The day we were there, two teen-age boys were stretched out in the garden.  “You know,” one said to the other, “Balzac smoked cannabis.”  I don’t know who their source was for that little tidbit but it seemed to please them. 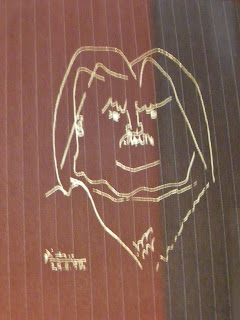 Tuesday through Sunday, 10 to 6
Closed Mondays and holidays