Out & About - Exhibits - Picasso / Giacometti


Picasso?  Most of it, not so much.  But Giacometti?  Yes, please.
So when I heard the Picasso Museum in Paris was having a show with Giacometti in it, I decided to go back there. Besides, they’ve remodeled since the ouster of the old curator... or so I’m told.

Evidently Picasso and Giacometti had a long friendship, both before and after World War II.  (During the war, Giacometti returned to his native Switzerland whereas Picasso stayed in Paris, even though his art was banned by the Nazis and he himself was often hounded by the Gestapo.) Although twenty years older, and already a known celebrity compared to Giacometti’s beginner status, Picasso recognized the young Swiss artist’s talent and they became fast friends, not only on an artistic level but on a human one as well.
The artwork - over 200 pieces in all* - starts with early paintings and sculptures by both.  The first room includes Picasso’s “The Barefoot Girl” along with Giacometti’s “Still Life with Apples”, both painted when the artists were just 14 years old.  Their talent was already obvious.
Some of the other rooms are organized by theme.  One shows both artists’ fascination with death. Another demonstrates the influence non-Western cultures, especially indigenous art, had on both of them.  As one panel explains, “Picasso’s totems and Giacometti’s steles display the same stylised forms and evoke the same magical quality as works from the Cyclades, Oriental antiquities and sculptures from Africa and Oceania.”
A third room, mostly sculptures, is devoted to representations of animals.  There’s a comic goat that Giacometti sculpted in 1950, as well as his representation of his friend Pablo’s elegant afghan hound, which looks fluidly emaciated, its fur rendered recognizably by the artist’s incision-like style.
The final section focuses on their Muses:  Annette for Giacometti and mainly Dora Maar for Picasso. 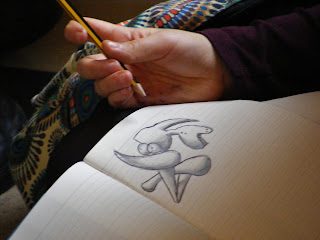 Throughout the exhibit, there were people sketching, including an entire art class. 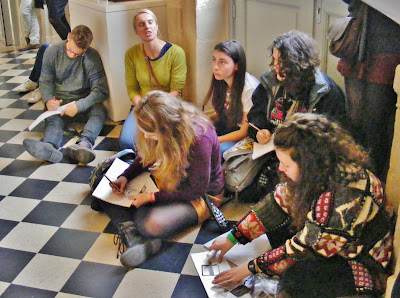 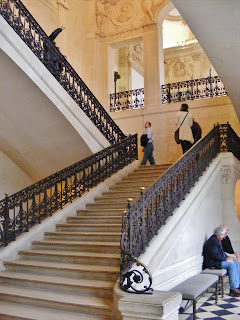 In addition to the artworks, two films are also on the menu.  On the upstairs level, which you reach by a majestic fer forgé and stone staircase, a small room - divided in half by a white wall - projects two films back-to-back.
Facing the window is the 1955 documentary “Le Mystère Picasso” by Henri-George Clouzot in which Picasso sketches himself.  It’s fascinating to watch an invisible hand draw one single line that twists and turns until a whole scene emerges, a scene an invisible brush then fills in with shades of black. The mastery of seemingly seeing what is hidden within the blank canvas is amazing.  Picasso’s hand never hesitates.
On the other side of the partition you can see another documentary, “Alberto Giacometti” by Ernst Scheidegger... or rather a series of short snippets that Scheidegger filmed of his friend between 1961 and 1965. One has him sculpting a face that becomes more and more furrowed with every incision; another shows him sketching Stravinsky.

You’ll have no trouble understanding the exhibit.  As usual in Parisian art shows, where the public is international, the explanatory panels are multilingual:  French, English and Spanish.  And an audioguide is available in several languages.


The museum itself is worth the trip.  It’s housed in the Hôtel Salé, one of the hôtels particuliers  - or private mansions - built in the 17th century in what had been a swamp (thus the name, the Marais).
The whole neighborhood is filled with such mansions.  Over the centuries, these majestic houses owned by nobles were broken up into apartments, first by floor and then even more, until they were often just an amalgam of rented rooms.  The area slipped down the social ladder, eventually becoming the Jewish ghetto.  And then came World War II.  The Jews were sent off to camps, most never to return, and the apartments were bought up by good French stock (and yes, that’s irony, because often they were awarded to the people who denounced those Jews).
When I moved to France in 1968, I attended part of the Sorbonne housed in more modern facilities amidst all the leprous old buildings in this neighborhood.  By the late Seventies, forward-looking people were buying up the small rabbit-hutch studios and sewing them together to make larger apartments for their growing families. Breaking down the partitions, they discovered the original stone walls beneath, and under the fake ceilings huge chestnut beams, some of them still with the stigmata of their old painted decoration.
Other apartments became the property of the City of Paris, often to pay off back taxes. The Hôtel Salé was confiscated in 1962 by the City, the owner and tenants expropriated, to create a Museum of Fashion (which you can now find at the Palais Galliera across town). 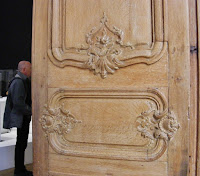 
* The Giacometti works are on loan from the Fondation Giacometti. 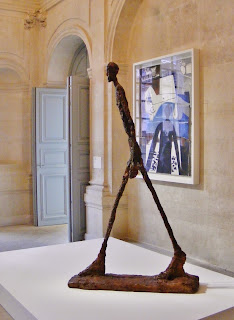