I really like photography.  Good photography.  And few agencies had better photos on a more regular basis than Gamma.
But now it’s gone.

Gamma was a French photo agency.  It was founded in 1966 by famous photographer Raymond Depardon, who’s perhaps even more famous for his later films.  Depardon had partners:  Hubert Henrotte (who later went on to start his own agency, Sygma.), Hugues Vassal (famous for his photos of Piaf and the Shah of Iran), and Léonard de Raemy (photographer to the stars).  They were joined shortly thereafter by Gilles Caron, illustrious for his coverage of the Six-Day War, the Biafran War, and France’s very own student/worker riots in May-June 1968.  (Caron disappeared in the Khmer-held territory of Cambodia in 1970; he was only 30 years old.)
Others whose names you may or may not have heard are Françoise Demulder, Chas Gerretsen, William Karel, Catherine Leroy, François Lochon, Georges Merillon and Emanuele Scorcelletti. The agency soon grew its own crop of famous names:  Abbas, Jean Gaumy, Sebastião Salgado, David Burnett and Gianni Giansanti.  Eventually it represented more than 6,000 photographers in all.
The agency’s initial aims were to improve the working conditions of photojournalists and implement equitable treatment of all its photographers.  Photo by photo, Gamma became the agency, whether for images of the glitterati or the warfront.


But as with all human undertakings, where egos are involved, conflict and jealousy soon erupted.  In May of 1973, a strike broke out and ultimately most of the photographers followed Henrotte to Sygma.  In 1980, Depardon made a film, “Reporters”, in which he followed several of Gamma’s photographers as they went about chasing images.  And then he left for the rival agency, Magnum.
As the 20th century drew to a close, Gamma was losing money, perhaps because of its refusal to “go digital”.  In 1999, it was bought up by a division of Hachette Filipacchi Médias and kept functioning.  When rumors circulated that the agency was in financial trouble in March of 2007, the agency changed owners and names several times.  It finally filed for Chapter 11 protection in mid-2009, after a loss of three million euros.

In April of 2010, it was sold for a mere 100,000 euros to the Eyedea Group, headed by... François Lochon, one of Gamma’s early photographers.  The Group included the Rapho Agency, a legend in the realm of images. Continuing as Gamma-Rapho, it also handled the works of photographers Édouard Boubat, Robert Doisneau, Willy Ronis, Jean-Louis Swiners, and Sabine Weiss, as well as inheriting the archives of  the Keystone, Explorer, Hoa Qui and Stills agencies.


So Gamma, per se, is gone, but its stock of over 500,000 photos still exists. Hard to track down, and all too-brief (Oct. 6-23 only), this exhibit included fifty of them selected from the entire range of its spheres of interest: “beautiful people”, everyday life, wars, humanitarian crises... anything that was news and caught the eye.  (A list of the photographers is given below.)
All fifty are perfectly framed works of art that tell a story. All fifty were sold on the final Sunday, with the proceeds to benefit Reporters Without Borders (https://rsf.org/). 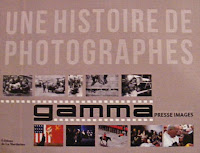 A 336-page book weighing in at a hearty 2.6 kg (5.7 pounds!) is also available at a mere 59€.  (I hear it’s available via Amazon, although I prefer spending my money in brick-and-mortar stores.)