Out & About - Magical antique automatons 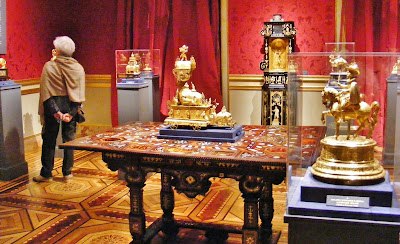 If we're lucky, when we grow up, we manage to not let go of the ability to be amazed.  And when we discover something fascinating, we just stand and marvel.
Which is why when a Paris friend told me about an exhibit of automatons, those marvelous tiny machines that come to life, move their eyes and limbs, and sometimes even more, I had to go. 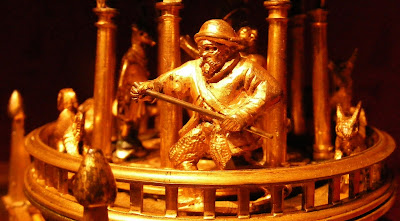 This is not an exhibit in the strictest sense of the word.  Galerie Kugel deals in antiques, and has for five generations.  (Before that they were clockmakers in Germany, which ties in neatly with these automaton clocks.)  In 2004, the Galerie relocated to the building on the Seine River at 25 quai Anatole France, a mansion constructed in 1840 for the Director of the Mint.  The exhibit space takes up three levels:  the ground floor and two more.  The automatons are on the first level. 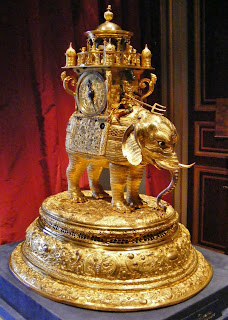 In talking with one of the many young people who patrol the exhibition rooms, I learn how far Kugel goes to sell its antiques.  For instance, when I guess that the building dates from the 18th century, based on the wood panels on the walls, the young man explains that the panels have been mounted on the walls underneath and are for sale. He then adds that one wall of that room has been pushed back somehow to accommodate the Persian rug on the parquet floor.  The chandelier overhead is also not “d’origine” in this room - the real original one has been removed for the time of the show - and it's for sale.  Everything in the room is for sale.  What you are seeing is not someone’s study or living room or boudoir. It is, in fact, a theater set, complete with all the props, all of which could be yours for the asking... at the asking price.  All smoke and mirrors.  Lots of mirrors. 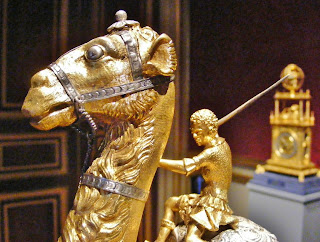 But back to the automatons.  Over 30 of them - the largest collection ever assembled - are artistically scattered throughout the room. Exquisitely lighted, they all glitter.  And only some of them are under protective glass.
None are wound up so you won’t see them move, and signs ask you not to touch them.  But some have little screens on their pedestal running a video of the object in movement.  There’s also a large screen at the far end of the room with a video of all of them doing what talented hands created them to do.  In addition to telling time.
Almost all of the creatures have eyes that look to one side and then the other, counting off the seconds.  Monkey and lion tails swish back and forth.  Dogs and other animals open and close their jaws.  “Though animals dominate the automaton kingdom, a few humans inhabit it as well, and one may encounter a Turkish horseman swinging his sword, and lion and bear tamers pulling on leashes.”  The fat king - or perhaps Gargantua? - lifts his glass again and again.  The mahout raises his trident and then lowers it to strike the hours.  Men and animals swirl around a tower.  A woman holding a glass of... something floats across the table on invisible wheels. 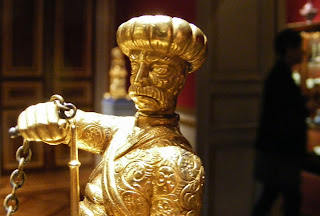 Although the mechanics are amazing, even more amazing is the craftsmanship that went into all the engraving.  How many eyes were ruined incising all the tiny features?  The frown lines.  The embroidery on clothing.  The tweed fabric of the pirate’s trousers.  The fur of the camel and curly locks of the sheep’s wool.  Or simply the gilded backgrounds.
Not to mention that all have working clocks, with all the gears required hidden from view within these golden masterpieces.
How many hours went into the making of just one of the simple automatons, not to mention the larger, more complex chef d’oeuvres?
Most of them were made in the 17th century in Augsburg in southern Germany, one of the leading goldsmith centers of its time.  Some were gifts that rich nobles offered to each other... and to themselves.   Still others were diplomatic presents.  "From the middle of the 16th century onward, automaton clocks were regularly sent to the Sultan in Istanbul, as part of the yearly tribute paid by the Empire in order to preserve peace. In the 17th century, Jesuit priests presented automaton clocks - along with other works of art and scientific curiosities - to the Chinese Emperor, hoping these gifts would help spread Christian ideas throughout Asia.” 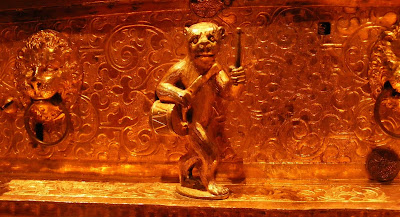 You can also tour the other rooms, filled to the brim with antiques, some the very finest you could find anywhere.  I’m not sure what kind of décor they would fit in, but if only for the mastery of the craftsmen, it’s well worth your time to take a look.
But even if you go only for the automatons, you won’t regret it.  As the gallery says, “Nearly 400 years after their creation, the animals of this mechanical bestiary continue to fill us with awe and wonder.“ 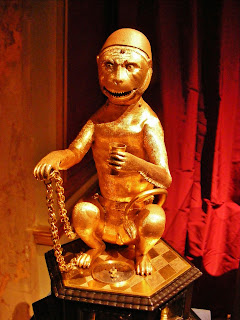 
P.S.  The Musée d’Orsay is just a block away, if you’re still hungry for more beauty.

P.P.S.  If you enjoy automatons, there’s a museum of nothing but that in Lyon, France - an hour’s train ride south of Paris.  I covered it here in Sandy's France in 2011.  Here’s the link:  http://sandyschopbach.blogspot.fr/search?q=Lyon+automates