Out & About - Exhibits: Hergé In Paris, there’s always an art exhibit to see, given that the French capital has about 130 museums.  This October, one of them spotlights Belgian cartoonist Hergé.  I went to see it today.  And I hope my children will continue to speak to me, seeing as they feel his drawings are racist.

It’s true that Herge’s very first Tintin book - Tintin au Congo - depicts the natives of the then-Belgian Congo with thick red lips and speaking pidgin English. Well, pidgin French actually.  I could explain to them that it was 1931 and things were different then, but they wouldn’t buy it.  I could say Hergé hadn’t been to Africa and only got his information from the Royal Museum for Central Africa* in Tervuren, just outside Brussels in his native Belgium, and that he was young and inexperienced.  But that wouldn’t help either.
Still, I went to the exhibit because Hergé and Tintin are a huge part of the pop culture of 20th century French-speaking Europe, and probably the chief source of the enormous success of today’s comic book business - or graphic novel, as the publishing business prefers to call it nowadays, so that people will take it seriously as a genre. 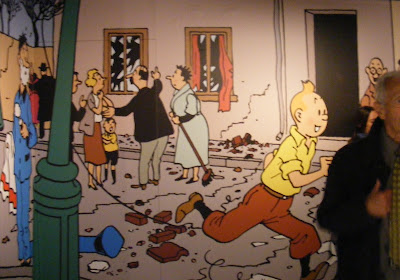 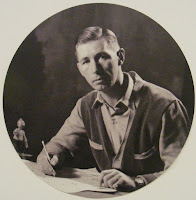 Hergé’s actual name is Georges Remi, the inverted initials of which (RG) are pronounced air-zhay, or Hergé.  He was born in 1907 in Etterbeek, Belgium, just outside of Brussels, into a middle-class family.  His whole life was spent at the drawing board, most of the time turning out comic strips and albums, but sometimes publicity.
He was already drawing comic strips when Germany took over Belgium, along with most of Europe.  When the magazines his strip appeared in were shut down by the Nazis, he had to find others in order to make a living.  Unfortunately for him, all the newspapers and magazines authorized by the occupying forces were deemed suspicious after Belgium was freed.  And so, in 1944, Hergé was arrested several times and interrogated, then released, but only officially cleared of collusion with the enemy in May of 1946. 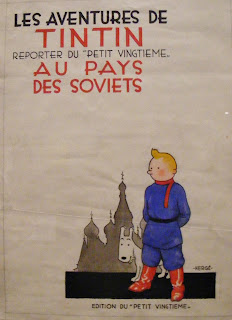 By then, his most famous creation - Tintin - had been around for almost twenty years.  The first of the Tintin albums - Tintin au pays des Soviets (Tintin in the Land of the Soviets) - came out at the start of 1929.  Although the young reporter is always off on an adventure somewhere around the globe - Switzerland, England, America, the Congo, Peru, India, Egypt, Indonesia, Nepal, Tibet, China - we never see him actually write anything.  His adventures are the story.
In addition to all these countries, Hergé also stranded his boy reporterin the Sahara (like the pilot in Le Petit Prince) and out on the Atlantic Ocean.  But inspired by the novel of Jules Verne (From the Earth to the Moon) and the silent movie of Georges Méliès (A Trip to the Moon), Hergé’s love of the future had him land Tintin on the Moon in 1950, long before Neil Armstrong and Buzz Aldrin set foot there in 1969.
Other characters who accompany Tintin in his adventures are his trusty white fox terrier Snowy (Milou) and the irascible Captain Haddock, whose cursing (Mille milliards de mille sabords! or Tonnerre de Brest!) every young French and Belgian child can quote without getting their mouth washed out with soap.  Haddock (Hergé’s personal favorite character) lives in a country home which Hergé closely borrowed from Cheverny, one of the famous châteaux of the Loire Valley.  (One room of the exhibit has a large model of the Captain’s home and behind it, for comparison, a photo of Cheverny that takes up an entire wall.) 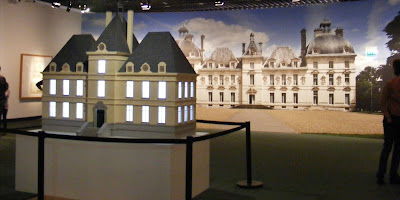 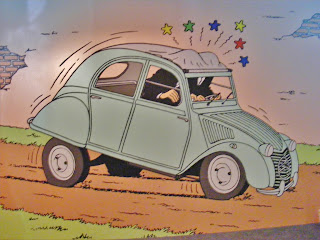 There’s also the wildly inventive but totally scatterbrained and mostly deaf Professor Calculus (Professeur Tournesol) and two bumbling policemen - Thomson and Thompson (Dupont and Dupond) - who echo what each other says with a “To be precise...“ (Je dirais même plus...) and differ only slightly in their respective mustaches.   From time to time, there’s also the opera diva Bianca Castafiore, who terrifies Captain Haddock and sings horribly. 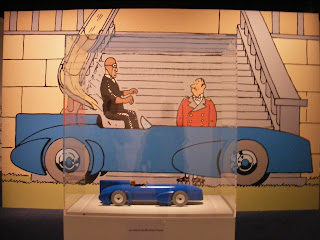 The exhibit includes hundreds, maybe thousands, of drawings of all these characters, plus some models of props from the series - a space module, a racing car, a planetarium...  It’s a very intense resume of an entire career, and perhaps not for everyone.  But lovers of this indisputably talented artist will find a wealth of information.  And the informational panels are in French, English and Spanish.
And there were people of all ages, from children to very old timers probably reminiscing about their lost youth.

Hergé died of leukemia in 1983, leaving Tintin an orphan and his readers bereft.  Luckily for the European comic book world, he left behind a whole family of spiritual sons and daughters to fill the void:  Goscinny and Uderzo with the Astérix series, Morris with his iconic cowboy Lucky Luke, Claire Brétecher with her many frustrated females (including Cellulite), Franquin with his bumbling-but-well-meaning Gaston Lagaffe, Greg and the irrepressible Achille Talon...  not to mention the more realistic graphic novels à la Steve Canyon such as Lieutenant Blueberry, Buck Danny or Lady S.
Today the comic book genre is still alive and well, not only in Europe but around the world.  And some of that we owe to Hergé. 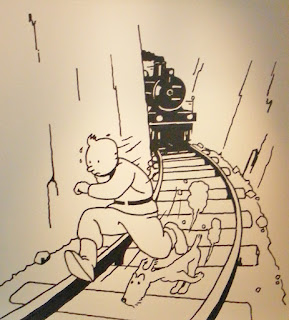 * For my blog on this museum, see
http://sandyschopbach.blogspot.fr/2013/11/on-road-musee-royal-dafrique-centrale.htmlh