Out & About - Exhibits: Mary Cassatt Exhibit 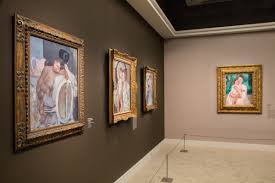 I’ve talked about the Jacquemart-André museum before, so I’ll be brief here.  Suffice to say it was once a private home - or rather mansion - built by Edouard André for his wife Nélie Jacquemart, who was also a painter and did his portrait ten years before their marriage.  (I guess he must have liked it!)
At their death, the house was bequeathed to the Institut de France with the proviso that it become a museum.  It still has the original furniture and decoration, including a fresco by Tiepolo on the grand staircase and another on the ceiling of the adjoining room.  The couple’s art collection, especially of Italian masters, is considerable and a tour of the house is well worth your time while you’re there.
But given Nélie’s artistic bent, it’s only fitting that part of the mansion should be reserved for temporary art exhibits.  The present one spotlights the talent of one of the first women artists of Impressionism, Mary Cassatt.  And an American to boot.

A short film - unfortunately only in French - at the entrance to the show discusses the birth of Impressionism and Cassatt’s place in it.  Much of it underlines her close friendship with Edgar Degas.  And there’s something fitting in that, because while the family of Cassatt’s father were French Huguenots who immigrated to America in 1662, Degas’s mother was from New Orleans, so they had that Franco-American link in common.
Yet in spite of her American-ness, Cassatt chose to live most of her life in France - almost sixty years.  Over that span of time, and thanks to her friendship with Degas, she became part of the Impressionism movement.  Her art slowly transformed from the classicism that won her a place in the rigidly traditionalist Paris Salon in 1868.  But as it changed, the doors of the highly-formal Salon closed to her, as they did to others who then chose to react by creating their own movement:  Impressionism.

The first room of the exhibit includes a few works by Degas of his good friend Mary:  one at the Louvre as she admires a painting, another of her buying a hat, and one of her just sitting, a portrait she hated.  There’s also that canvas that won her a place in the 1868 Paris Salon - A Mandoline Player - which enables you to see the artistic territory she covered in her evolution as an artist.
In one of the other rooms is a 1913 quote by Achille Ségard, author and art critic: “Instead of choosing the easy road, she felt the need to concentrate on the realities of volume, the movement of lines and of sentiments.”  Although she did several canvases of her brother Alexander, one of which is on display here in the second room, her favorite subjects were women with their children.  But not maudlin images.  No.  One of the first feminists, she chose to show the noble side of women.
Like the other famous woman artist of the day, Berthe Morisot, she is known for her portraits.  And yet this exhibit also includes many of her aquatints (La Toilette) and dry points (Dans l’omnibus), which she printed out herself on a press she bought and learned to operate.  Room 4 concentrates on these works.  Many of them fall within the period where she, like other Impressionists such as Monet, became fascinated by Japanese prints, and a Japan-effect is clearly visible. 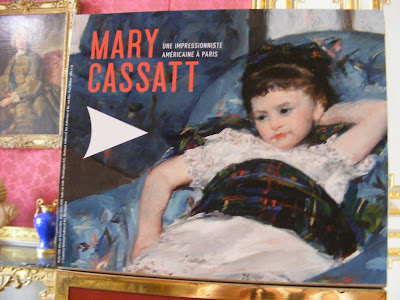 The most famous, perhaps, of all her works is the one chosen for the exhibit’s billboards and publicity:  Little Girl in a Blue Armchair.  It shows a young girl slouched in a blue chair, one arm behind her head, her gaze lost in little girl dreams, her dog on the chair opposite her.  You wonder what she’s dreaming of.  An interesting point about this canvas is that Degas lent a hand; the back wall that Cassatt had painted straight has been “corrected” by Degas, transformed into a corner with angles in order to better focus the eye on the girl.  It’s the only one of her works where Degas took up the brush himself instead of just making suggestions.
One good point about this little girl, for me, is that she isn’t overly rosy of complexion.  It’s the one detail of Cassatt’s paintings that I dislike.  I dislike it in Renoir also.  Both tended to paint overly-rosy cheeks and full faces, unlike Monet or Degas or the other Impressionists.
I also admired the print called La Toilette.  It shows a woman, modestly turned away from the viewer, her blouse off, washing up in a basin of water on her commode.  The curve of her back is admirable, the bare corner of her face teasingly visible in the mirror, and the blues are amazingly vibrant.
The oil of mother and daughter in a boat watching the ducks (Summer) demonstrates a typically Impressionist rendition of water.  The splashes of blue, underlined with yellows and oranges and greens, perfectly translate the movement of the water and the reflections broken up by that movement.

In spite of this fascination for mothers and their children, Mary Cassatt never married and never had children of her own.  Her canvases were her children.  And she managed to actually live from her art, unlike others such as Van Gogh.  After a long life as artist, she, like Monet, developed cataracts and decided to put down her brushes.  A sad end for an artist.

This collection of some 50 pieces is the first collective exhibit in France of Mary Cassatt’s works since her death in 1926.  In addition to works that have stayed in France, there are canvases from all over:  from her native Pittsburgh, from Philadelphia where she attended art school, and from New York, Boston, Chicago, Cincinnati, Newark and Washington, D.C., as well as Lisbon, Zurich and Bilbao. That’s the great advantage of such a retrospective show:  bringing together works you would never see side by side otherwise.
And the exhibit gives a good perspective of how her art evolved from the pure classic style of her early years to the whittling down to a more bare minimum of lines and colors.  If you like portraits in particular, you will thoroughly enjoy this exhibit.

Note:  Although the explanatory boards are in French only, audio-guides are available in many languages.