Out & About: Exhibits - Alphonse Mucha


When I was in Prague last fall, I went to the Mucha Museum.  So going to this Mucha exhibit at the Musée du Luxembourg was kind of like visiting an old friend. 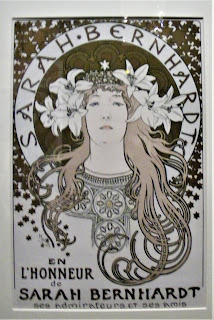 For starters, as of the first room, there was the same photo, taken by Mucha of his good buddy Gauguin, newly arrived back from Polynesia, playing Mucha’s piano dressed in only a mercifully long shirt, his bare feet and legs working the pedals.
The information gleaned in Prague on the life and works of Alphonse Mucha (gutturally pronounced “moo-ha”) also helped make sense of this Paris exhibit.  For instance, the museum’s second room is set aside for his posters of Sarah Bernhardt, the ultimate theatrical star of the turn of the century.  She liked his first poster of her so much that she proclaimed, in true star fashion, “I love that.  You’re mine from now on.”
Of course, Toulouse-Lautrec had already made posters a new art form, up in Montmartre with La Goulue and Jane Avril.  But Mucha took it even further - and lived longer.  His success was helped along by works for the renowned jeweler Fouquet, and later by an exclusive contract with Parisian printer Champenois.  With that, he could move from his cold Grande Chaumière artist studio in Montparnasse to a quite posh apartment in the toney Val de Grâce neighborhood, a setting suitable to invite all his rich new friends.
After years of success, Mucha moved back to the now-independent Czechoslovakia, after several trips to the States to find a patron for his masterpiece, The Slav Epic.  (Wealthy Chicago businessman Charles Richard Crane filled the bill.)  For many years Mucha worked fervently on that project to the glory of his Slavic ancestors, culminating in twenty intricate canvases recounting scenes from Czech history as well as that of other Slav nations. 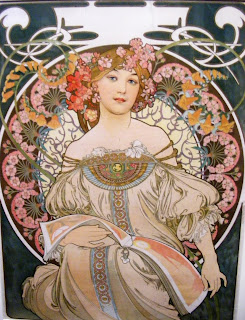 But in the end, Czechoslovakia savored only twenty years of independence, and when the Nazis marched into Prague in 1939, Mucha was one of the first people rounded up by the Gestapo.  Too famous... and also a Freemason.  He caught pneumonia in prison, whereupon the Nazis freed him, not wanting him to die in their custody.  But die he did anyway only days later, shortly after his 79th birthday.
Mucha is more than just one of the artists in the dccorative arts movement of the turn of the century.   He came along at the birth of Art Nouveau, with its sinuous forms, floral motifs, ornamental lines and lovely young ladies, all rendered in a subtle palette of pastel colors.  Mucha is the embodiment of the genre.  Alphonse Mucha IS Art Nouveau. 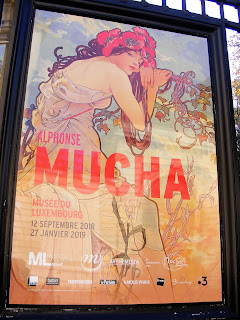