Out and About: Exhibit - Paris au temps des Impressionistes 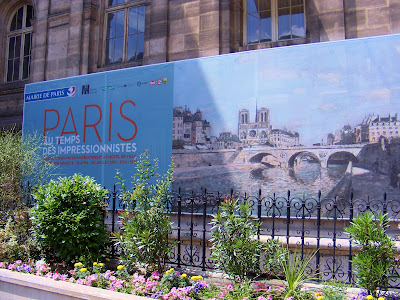 Paris' City Hall has been experimenting with art exhibits, and the one currently there - through July 30 - is called "Paris in the Age of the Impressionists".

Between 1850 and 1914, Paris was transformed into a modern capital.  It was an era of massive projects:  the excavation of the Métropolitain subway system, the building of Garnier's Opera House, the creation of public parks, the birth of guinguettes like the one Renoir painted... So many changes.
Security is tight to get in and it’s only when I’m setting my purse on the x-ray belt that I remember my Laguiole pocket knife that I always keep when I'm on tour in France, for picnic purposes. Either the security guy doesn’t see it or doesn’t recognize it for what it is... or doesn’t care.  But be forewarned.
The exhibit starts with maps and photos of the urban renewal projects carried out by Baron Haussmann to erase the Middle Ages from Paris, open it up for new monuments like the Opera House and provide easy access to the many railroad stations newly dotted across Paris. There are also drawings and photos of some of the large theaters built as of 1850.
Then the artwork starts, and it is impressive. The paintings are on loan from the Musée d’Orsay because it’s been undergoing major renovation and some areas are closed. Most of the works I’ve never seen before; Orsay doesn’t have room enough to show them all and they lie hidden away, dormant, in its basement storage. Others are old friends that have been lording it over the top floor of Orsay since it opened.  But once again, the one I like the most - La Pierreuse, a sketch of a demi-mondaine - isn’t among the postcards offered for purchase.
This is an impressive show.  The word is out, which means there will probably be a line of people waiting to get in, so arm yourself with either patience, a good book or joyous company.