A fromage a day keeps the doctor away

﻿﻿﻿﻿﻿﻿﻿﻿﻿ ﻿﻿﻿﻿﻿﻿﻿﻿﻿ Faced with yet another instance of French voters complaining and demonstrating, President Charles de Gaulle once threw his arms up in the air and exclaimed "Comment voulez-vous gouverner un pays o il existe plus de 300 variétés de fromage!" How can you be expected to govern a country that has over 300 sorts of cheese! I’m sure it must have bewildered the General, who was used to ordering about his troops yet couldn’t get similar discipline from his constituents.
But the quote also makes a point of how many different types of cheese the French do indeed have. Each region has its own palette of cheeses, raw milk or cooked, pressed or soft-ripened... from cows, sheep or goats. Maybe now that there are bison, they even have a buffalo cheese, but I haven’t heard of it.
﻿﻿﻿﻿ ﻿﻿﻿﻿      When my daughter was very little, she divided them up into two categories: Red Cheese and Stinky Cheese. Red cheese was any kind of pressed cheese and she based that criterion on the Dutch cheese she loved so much: Edam, one of the few foreign cheeses that has found favor with the French. It comes with a coating of red wax. Thus "Red Cheese". It has a rather mild taste, so Swiss, Comté and other such mild cheeses fell under that category. They were Red Cheeses. All the rest were Stinky Cheeses: camembert, brie, maroilles, pont- l’évèque... The list is long. And she loved them. It’s in the genes, if you’re French.

Cheese has long been revered in France. For the poor, it was often the only protein they could afford... or better yet, make themselves. But Respect for the Cheese isn’t just a rural or a blue-collar thing. It’s a feeling shared by all castes of French society. After all, no less than Brillat-Savarin - chef to royalty and generally recognized expert of gastronomy - wrote: "Un repas sans fromage est une belle qui il manque un il." A meal without cheese is like a beautiful woman who’s missing an eye. 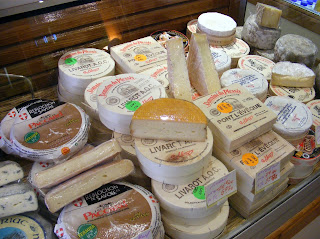 Cheese appears in many common French expressions heard every day, such as "en faire tout un fromage" - "making a cheese about it" - which means giving something far more importance that it’s worth, making a mountain out of a molehill.
There’s also a less frequently used expression to denote the moment near the end of dinner when conversation becomes lighter, more sparkly. That’s the moment "entre la poire et le fromage" - between the pear and the cheese. This expression dates back to the Middle Ages, when spicy meals (spices added to cover the taste of over-ripe meat) would end in a piece of fresh fruit and a cheese. Nowadays the order would be inverted, with the cheese coming after the main course - sometimes accompanied by a simple green salad - and before the dessert, whether fresh fruit or something more elaborate. (N.B. In homes, dessert usually is fruit or something yoghurt-y. Cakes and pies, mousse au chocolate and île flottante are kept for festive occasions... or the restaurant.)
But there must be cheese. Red or Stinky. Otherwise, it’s not a meal.
Not really.