Back and forth, across The Pond 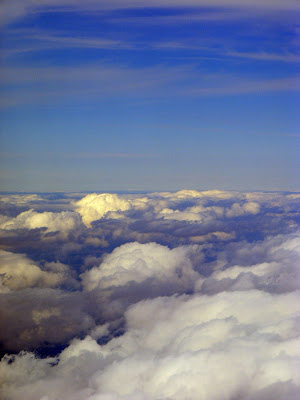 As you know by now, I split my time between opposite sides of the North Atlantic. It wasn’t planned that way; it just happened. This ping-ponging back and forth across The Pond has many advantages. But it involves some cultural juggling as well.

That becomes immediately obvious the first time I try to turn on a table lamp. In the States, the on/off switch is near the light bulb, whereas in France it’s lower down, on the cord. Usually I can remember this when it gets dark on my first evening in Montmartre. But the following morning, if the sun’s not up yet, I tend to forget and fumble around my nightstand before the penny drops and the light goes on, first in that little cartoon cloud over my head and then in the bedroom.
Then there’s the question of floors in a building. In case someone invites you over and says they live on the troisième étage - third floor - remember that while Americans count the ground level as the first floor, Europeans - including the English, who are separated from us by a common language - feel the first floor is one flight up. It’s the ground floor that’s on the ground. So you’ll have three flights of stairs to walk up, not two. (N.B.: In French "ground floor" translates to rez-de-chaussée, rez meaning level - as in the verb "to raze" - and chaussée being the pavement... thus "level with the pavement".)
Even household chores can prove foreign. First of all, there’s vocabulary... practical words such as "can-opener", which I did not learn in college French - thus making me look stupid in a certain Parisian hardware store. And then there’s the ignominy of helping a friend set the table and being told ever so nicely that I was doing it all wrong. So just so you know: the fork lies tines down, the knife blade faces left and the dessert spoons and forks go head-to-toe at the top of the plate, at 12 o’clock. That’s how it’s done à la française.
And while we’re on the subject of eating, Americans need to get it right. An entrée - with or without the snobbery of an accent - is not, I repeat not the main dish. The main dish is the plat principal in France, the principal plate. An entrée is the dish you enter into the meal with, as you use the entry to enter a house. This is something that still confuses me no end when I read an American menu, maybe because it is so etymologically counter-intuitive.
But these are all details. The bigger issues come when you go about planning your day to accomplish all those ordinary tasks. For instance, checks. Lord knows how many checks I’ve had to throw away on both sides of the Atlantic because I filled them out wrong. Leaving aside the issue of writing francs instead of euros for months after the single currency went into effect, I’ve ruined many a check by writing the wrong thing on the wrong line. Let me explain. In the U.S. of A., the person you write the check to goes on the top line. But in France, it’s the sum that goes on the top line and the beneficiary on the line below. The tacit logic behind this is "pay the amount of (fill in the blank) to (fill in the blank)", instead of "pay to ..." - well, you get the idea. And just when I get the hang of it in France, I travel back to the States, where I blithely write out "Pay to the order of $20" on a good half dozen checks before my mind shifts gears.
There’s another problem that arises in writing checks - and elsewhere - and that’s the date. In the U.S., we write October 23, 2011. Or in figures: 10/23/11. Whereas Europeans - even the Brits - write 23 October, which translates to 23/10/11. With numbers like these, there can be no doubt that a mistake has been made, given that a year here on Earth has only twelve months. But some dates can prove problematic. For instance, when I first enrolled at the Sorbonne I filled in my date of birth as 8/6/... (never mind the year). My credentials all came back with my birthday marked as June 8th. It took me a while to figure it out. And then I had to go through all the red tape of French bureaucracy to correct it. Believe me when I say that making a mistake is much easier than rectifying one.
Even calendars are a trap. In America, the week starts with Sunday on a calendar. In France, it starts on a Monday, which is more in keeping with "...and on the seventh day, He rested". So I have to be very careful that I write a Tuesday appointment in the second square of the week, instead of the third. Otherwise a superficial glance at the calendar tells me I have all day to soak in a tub, from which I’m rousted by an angry phone call from the dentist’s office asking where the hell I am!
Add to that the fact that the French use a 24-hour clock, in which 3:00 becomes 15.00, and you have grounds for also being two hours late for something. (I once missed my transatlantic crossing on the steamship France because of that. It took a tugboat and stopping the France twenty minutes off of the Statue of Liberty to get me on board... but that’s another story.) So when looking at timetables or TV programs or movie schedules, remember to subtract 12 from anything over 12 in order to get the correct U.S. time. 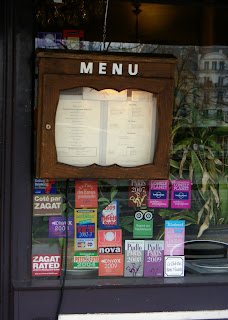 And then there are errands, which do not follow the same daily rhythm on both sides of the Atlantic. For instance, in America, you can do your shopping just about any day of the week. And you can eat at most restaurants any time of the day. In France, however, many banks close at lunchtime for one or two hours and most restaurants - except brasseries - have specific hours for lunch and supper, especially in the provinces. So when traveling outside of Paris, make sure you stop for lunch by 1:15 (or 13.15) if you don’t want to go hungry. On the other hand, shops and stores usually stay open later than in the States, which means you can still buy things for dinner until 7 pm (19.00), by which time dinner would be over in Massachusetts, the dishes washed and the TV already on. And most restaurants don’t even open their doors until 19.30, so if you’re planning to eat out, be forewarned. 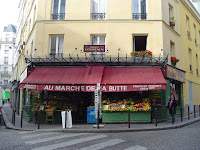 Then there are Sundays. Almost all stores are closed on Sundays, except for the corner shops. The idea is to give small businesses a chance not to be run out of existence by big box and chain stores. So don’t expect to do the week’s food shopping on a Sunday. You won’t find anything but the Arab green grocer open, and he’s pressed for space so his selection is limited. Mondays aren’t looking good either. Most shops are closed on Mondays, as are many restaurants - all because French law requires businesses to give their staff two consecutive days off. So plan wisely, Grasshopper. (I won’t go into the August Problem because I covered it already in "Not April, But August in Paris" - Aug. 20, 2011.)
The French have other ways of doing things, and other priorities. It’s not rocket science, but it toys with the way we’ve almost hard-wired ourselves to plan out our days. Just don’t lose your sense of humor and you’ll be fine.
There’s always tomorrow. Tomorrow is another day.

P.S. Warning: if you’re ever working as a spy, do not count 1-2-3. with your fingers. It is always thumb-first, not last! I saw a war movie where this got someone shot.