Out and About: Diplomatie 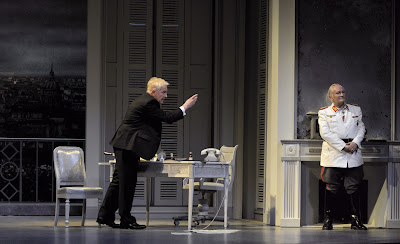 No, that’s not a spelling mistake. That’s the name of a play I saw in Paris in the spring. It means diplomacy, in French. (But you figured that out, didn’t you?)
Anyone who has lived in Paris for a while knows the story of the near-destruction of the French capital by the Nazis at the end of World War II. Those plans were also covered in a famous 1966 movie - "Is Paris Burning?" - by French film director René Clément, acted out trilingually by a cast of stars from France, Germany, England and the United States.
The plot, for those of you who aren’t familiar with the true story, is a fascinating one. On August 25th, 1944, the Allies were at the gates of Paris. As dawn broke, Dietrich von Choltitz, Military Governor of Paris, was ready to execute Hitler’s orders to blow up the capital before the Nazi’s retreat: "The city must not fall into the enemy's hand except lying in complete debris." All the bridges were to be blown up, which would dam up the Seine River and flood all the low-lying neighborhoods of Paris - a good fifth of its total surface. And all the monuments were to be destroyed, from the wedding cake-ness of the Sacré-Coeur and the lacework of the Eiffel Tower to the venerable Notre-Dame and the prideful Arc de Triomphe. Nothing would be left of Paris, and its population would be either blown up along with it or demoralized for years to come, its economy in tatters and faced with the enormous cost of rebuilding. Von Choltitz was a general of the old school whose loyalty to the Reich had never been questioned, either by himself or by anyone else. But as the glories of Paris can still be enjoyed today, the question is: why did von Choltitz not carry out those orders?
The course of history was perhaps changed by a dawn meeting between von Choltitz and Raoul Nordling, Consul-General of Sweden in Paris. The two men had met before. Could Nordling have convinced the General to refuse to carry out an order from his commander-in-chief? And if so, how?
Given all that, the interest of the play - as in Greek tragedies - isn’t so much what is going to happen but rather how it is presented. And that’s where Diplomatie really shines.
The play was written by Cyril Gély, who imagined the negotiations between these two men and how Nordling, who was born in Paris and loved it dearly, might have won over the loyal general. During the one-act play, which runs a fast hour and 40 minutes, the upper hand is volleyed back and forth. And as it is, these two men are gradually fleshed out with emotions that are easy to understand, managing to make the German general a surprisingly touching figure.
Added to a most excellent script is the play’s tight direction by the ever-talented Stephan Meldegg, a convincing and effective stage design by Stéphanie Jarre, and highly inventive lighting effects by Roberto Venturi. But more than all that, these are absolutely brilliant tag-team performances by two fabulous actors: Niels Arestrup and André Dussollier.
Arestrup is probably the more familiar of the two because of the films he’s made over his 30-year career (including Julian Schnabel’s much-awarded "The Diving Bell and the Butterfly"). In addition, Arestrup has won two Césars (the French Oscar) and is currently starring in the gripping movie, "Tu Seras Mon Fils" by Gilles Legrand, which has still to cross the Atlantic.

André Dussollier also has a career of some 30+ years as well as three Césars (plus five more nominations) for his screen roles - not to mention countless appearances on television and four Molières (French Tony Award) for stage roles ranging from slapstick comédies du boulevard to the classical Molière himself.
All this combines to make this one of the best plays I’ve seen in years, fast-moving and full of rebondissements, which is French for "you never know what’s going to happen next".

But why is she telling us about something we won’t be able to see, you ask? Ah, but you will!  Because this play will be back on stage by popular demand at the Théâtre de la Madeleine from October 1st through December 31st of this year.  And by the way, both actors say it's the last stage play they will ever do - which makes it even more compelling to see.
There are also plans to make Diplomatie into a movie starring Arestrup and Dussollier, hopefully filmed in a way that preserves the tête-à-tête intimacy of their historic dilemma. So even if you can’t make it to Paris, you may one day be able to see this remarkable performance on the silver screen.

P.S. In the movie "Is Paris Burning?", the role of Nordling is played by Orson Welles and von Choltitz by Gert Fröbe, the nefarious Goldfinger of James Bond fame.


For reservations and a clip of the play itself, click on:
www.theatremadeleine.com/spectacles/diplomatie.html