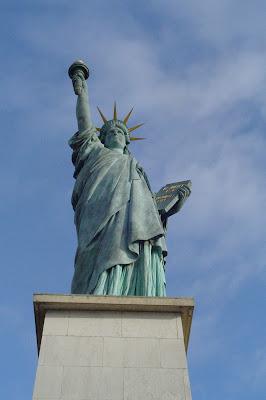 La Liberté éclairant le monde.
That’s her real name. Liberty enlightening the world.
But we all just call her the Statue of Liberty.
No one alive today remembers when New York Harbor wasn’t enlightened by this gigantic lady with the torch. She’s been there since October 28, 1886.
125 years ago today.

As much as France and America have had a love-hate relationship, the love part seems to win out over the hate part whenever either is in need. But when things are hunky-dory? Not so much.

When the Colonies wanted their freedom from England, they turned to France, sending Benjamin Franklin to seek funding from the king in 1776 - and then sending him back as America’s first ambassador (1776-85). Of course, France did it mainly to niggle England, its "hereditary enemy", but still... without France’s financial aid and arms shipments, Americans would be driving on the left side of the road and talking with a funny accent. Then, when France had a little Revolution of its own, America was the first to help, albeit also to thwart England. (Great minds think alike.)

When World War I broke out, America belatedly came in on the side of France and its allies in 1917. On July 4th of that year, Colonel Charles Stanton (and not Gen. Pershing) came to the Paris grave of French General Lafayette and said "Lafayette, nous voilà" (Lafayette, here we are), thanking him for having fought at George Washington’s side.
In World War II, America ultimately came again, this time on June 6, 1944, and sacrificed the lives of 2,499 Americans on the beaches of Normandy that day to start freeing France and the rest of Europe from Hitler’s madness. And when France celebrated the 50th anniversary of D-Day, no American I know of - myself included - was allowed to pay for one single drink anywhere in Paris. As much as they hate to admit it sometimes, the French remember. And so do we.

But back to the Statue. Today is her 125th anniversary, but she’s older than that.
The idea that led to her birth is older still and leads back to a French law professor, Edouard René de Laboulaye, who supported the Union during the Civil War. A year after it ended, Laboulaye said, "If a monument should rise in the United States, as a memorial to their independence, I should think it only natural if it were built by united effort - common work of both our nations." Which is what happened. France provided the statue; America built the base.
At the dinner where those words were spoken was a young French sculptor, Frédéric Bartholdi. He thought it sounded like a fine idea, but French ruler Napoleon III wasn’t all that convinced. And then came the Franco-Prussian War, so the project went on the back burner again. Finally in 1871, Bartholdi went to America to propose his services. As his ship sailed into New York Harbor, it passed Bedloe’s Island and the sculptor realized that all future ships would pass here, making this the perfect spot for the statue he had designed: a woman breaking free of chains. But coming so soon after the Civil War, Bartholdi thought that concept unwise and changed it (although there are broken chains at the statue’s feet; infer what you will.).

The French government gave money, individual cities and regions pitched in and ponied up... even schoolchildren gave of their lait money. Bartholdi set to work, making two smaller models to test his design, both of which are still standing in Paris. The smallest is at the far end of the Luxembourg Gardens; the mid-sized one stands at what was then the limit of Paris, just past the Eiffel Tower... her back to it because she looks westward, beyond the horizon, to where her big sister stands. 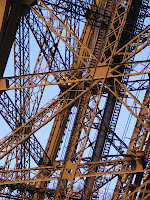 When the statue was finally completed, it was one of the technical feats of the 19th century, with Gustave Eiffel creating the framework that holds it up. The size of the figure meant that it had to be light, so copper was chosen and beaten into shape using the repoussé method in the foundry of Gaget, Gauthier & Co. (By 1900 the copper color had started to turn green, and the entire statue was green by 1906.)
The statue’s arm was finished first and sent to the 1876 New York Centennial Exhibition to help collect funds for the building of the base, including a drive by publisher Joseph Pulitzer. When the centennial was over, the arm headed back to France. By 1878, the head was finished and it was put on exhibit at the Paris World Fair. The first rivet fastening the copper "skin" of one big toe to Eiffel’s framework was driven in by U.S. Ambassador Levi Morton, and the completed statue was accepted by Morton on July 4th, 1884. It was presented by Ferdinand de Lesseps, architect of the Suez Canal - which shows that this statue co-opted all those involved in the century’s technical feats.
Now all France had to do was take it apart again and ship it across the Atlantic!
Lady Liberty was given the first ticker tape parade ever and President Grover Cleveland presided over the dedication ceremony. A fit welcome for a lady who traveled across the ocean to lift her lamp beside our golden doors.

In 1916, German saboteurs set off loads of dynamite near Bedloe’s Island. The statue was damaged, especially the arm holding the flame and that was closed and remained so. (I would almost give my right arm to be able to go up onto the walkway around that torch and look out on Manhattan!) During World War II, the monument remained open but not illuminated for fear of air raids. After 9/11, the entire island was declared off-limits until the end of 2001. The base was reopened only in 2004 and the statue itself remained closed to visitors until 2009! Now it will be closed again for a year while the stairs and elevators are replaced, among other safety measures.
I remember going up into Lady Liberty’s head in the summer of 1968 as a friend sailed back to France on the steamship France. I looked down from her crown and waved to him from the window, but I doubt he saw me. I saw Lady Liberty again - up close and personal - from sea level as a tug took me out to steamship France a few months later for my own trip across the Atlantic. Since then, her torch has been regilded as part of the Bicentennial of the United States of America. And now she has been equipped with a webcam in her torch, a fitting way to bring the venerable lady into the 21st century.

P.S. The statue’s real name - Liberty Enlightening the World - will forever be linked intimately to the words of a sonnet - The Colossus, by poet Emma Lazarus - auctioned off to help raise funds for the base. Lazarus worked with refugees newly arrived from the pogroms of eastern Europe and it is to them that her Colossus speaks:

Give me your tired, your poor,
your huddled masses yearning to breathe free,
the wretched refuse of your teeming shore.
Send these, the homeless, tempest-tossed to me,
I lift my lamp beside the golden door!"