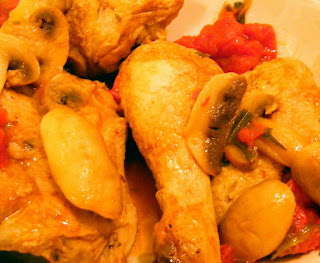 November. The first of the end-of-year festivities - Hallowe’en - is just over. Thanksgiving is right around the corner with Christmas not far behind. And both of these usually involve house guests and the cooking of large quantities of food. So a "one-pot-fits-all" recipe is a good thing, especially if it’s hearty enough to cut through the first chills of on-coming winter. (Sorry, Trick-or-Treaters; I don’t have recipes involving left-over candy.)
If you’re of Italian heritage, you may know this dish as chicken cacciatore, with the familiar tomatoes and mushrooms. Once it crosses the border, it becomes poulet sauté chasseur. The Italians tend to use basil and oregano to flavor their version, while the French lean toward tarragon, but aside from that the ingredients will look familiar.
And now I’m afraid I have to say something mean: American chicken is tasteless. Even the "Amish" chicken, although to a lesser extent. You might as well be eating paper, especially where white meat is concerned! It’s no wonder children love chicken; it doesn’t taste like anything. (And then, of course, they put ketchup all over it, but that’s another discussion altogether.)
I remember - with a lump in my throat and juices flowing at the mere thought of it - a chicken I bought in southern France. It was in Menton, to be exact, and I was sailing with some friends along the entire coast, from Spain to Italy. We had reached the Franco-Italian border and it was late morning on a Saturday. I know that because it was market day. And a market in southern France is a beautiful and aromatic thing. My job on-board was to check the boat in with the capitainerie - the harbor master - and then do the shopping. The harbor master gave me directions to the market, but I could just as easily have followed my nose... and the smells of roasting chicken, steaming paella and bins of spices. I bought a raw chicken, plucked but with the head on - as they always are in France. It was a poulet de Sospel, a town between Menton and the Mercantour National Forest. Its flesh was a lovely saffron yellow, the likes of which I have never seen before or since. And it was délicieux!

So find yourself a chicken you can be happy with and invite some friends over. Or just have a sit-down meal with the family. It’s almost winter, and this is definitely comfort food, French style.


- If you have fresh tomatoes just brimming with flavor, scald them in boiling water for 2 minutes and rinse in cold water until you can handle them. Then peel and seed them, and cut them into coarse pieces. If you use canned tomatoes, drain off the juice and cut the tomatoes into large pieces. (You can use the juice to flavor soups or in cooking rice.)
- Salt and pepper the chicken pieces. Then sauté them in the oil and butter in a heavy Dutch oven until they’re browned on both sides. Remove to a dish and cover them.
- Put the mushrooms in the same Dutch oven and cook them for 3 minutes. Add in the shallots, cover and simmer for 5 minutes, stirring with a wooden spoon from time to time. Add the flour or cornstarch and stir well for a minute. Add the wine and stock, plus the tomatoes and tarragon (except for a sprinkling to decorate with at the end). Taste and adjust for salt and pepper.
- Lay the chicken on top of the sauce and bring it back to a boil. Cover and let simmer on low heat for 20-25 minutes, checking that the sauce isn’t drying out. If needed, add a bit of water, wine or stock.
- Remove the chicken to a serving platter and, if necessary, reduce the sauce over high heat, stirring constantly. Pour the sauce over the chicken and sprinkle with the rest of the minced tarragon.

Serves 6
Accompany with steamed potatoes, rice or pasta
Pair with a dry white wine, maybe the same one you used in the chicken.