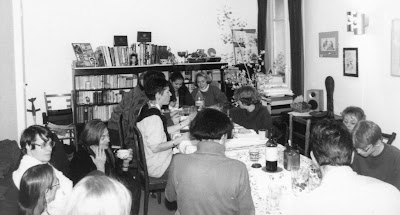 Turkeys are not indigenous to France.
When I got ready to celebrate Thanksgiving in Paris for the first time, I discovered turkeys are hard to come by in November. There are turkeys, but they are programmed to fatten for Christmas. No sooner.
That first Thanksgiving dinner was intimate. I hadn’t been in my new apartment very long and furniture was limited to a bed, an armchair, a folding chair, a side table and a few unmatched eating utensils. No fridge. And more to the point, no stove. But I bought a roasted chicken hot off the spit from the butcher down the street and heated up the string beans and the canned corn (very hard to find then) alternately on my single-burner butane gas "stove". Cranberries were unknown. We finished off with apple tarts from the baker’s.
The three guests were classmates from my comparative literature course at the Sorbonne, where we all sat on infinitely hard wooden benches in the same corner of the huge amphithéâtre. Here, my guests and I sat cross-legged on the floor, our "table" a festive tablecloth spread out on the carpeting. There was Sylvie, who had to leave her husband and child behind in what was then Soviet-aligned Czechoslovakia in order to be allowed to leave the country to study at the Sorbonne (hostages to guarantee she would return from France). And there was smart, witty Andreas from Germany, who arrived with an armful of flowers and a bottle of good wine, which was a luxury for us broke students. And there was Christine, a staunch French Communist of Russian extraction from a blue-collar suburb, who at least liked this America but hated our presence in Vietnam. I tried valiantly to explain Thanksgiving to this disparate group - all about Pilgrims and "Indians" and how so many died over that first winter that it wasn’t hard to find something to be thankful for when the harvest came. Still being alive was enough.
* * * * * * * *

In the years to follow, Thanksgiving was always at my apartment. And the size grew until it was normal to have 20 to 30 guests, which by then included my two children and their friends. It was a regular United Nations. There were, of course, my Americans friends, often with French spouses, and our collection of foreigners grew and mutated from year to year as they cycled in and out of France. There was a British couple who lived two flights down, so they were our token colonial exploiters. And another neighbor, a Lithuanian Jew who moved to France via Israel. Once there was a UNESCO diplomat from Mauritania who was never quite sure which dishes were American and which were French additions to the menu, but thought they were all a bit strange. Plus so many more I can’t remember all of them: Russian, Irish, Italian, Spanish, Algerian, Tunisian... So many countries!
One year my daughter invited one of her best friends from school. Her mother dropped her off, and I tried to convince her to stay but all she would accept was a glass of egg nog, once I explained it was like Italian zabaglione. She sat and talked to us all for a while and then said her good-byes.
"She was nice," said Crazy Harry, once she was gone. "Who was she?"
There was a moment of silence from all 20 of us.
"Harry," his French wife sighed. "That was Catherine Deneuve."
"Oh. What does she do?"
Harry wasn’t a big movie-goer. 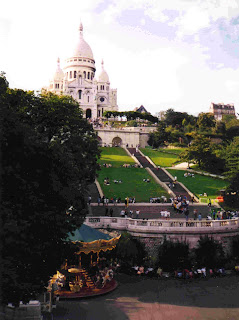 When it was time to eat, we needed a bit of ingenuity and some strong arms. Although I had a killer view of the Sacré-Coeur, I had only one small round table, perfect for our family of three but lacking in scope for 20. So we took the living room door off the hinges, removed the doorknob, laid one end of the door on my desk (I had accumulated more furniture by then) and the other on the round table, then covered it all with several festive plastic tablecloths.
While someone set the "table", Christian and I went down to the baker - who had become my friend over the years - and he took the turkey out of his huge oven, where it had taken only 2 hours to cook to a wonderful golden crispness that I’ve never been able to equal on a domestic stove. He always got the Pope’s Nose as his pay (and if you don’t know what part of the turkey that is, look it up). His wife got a slice of my pumpkin pie later in the day and their daughter a bowl of clam chowder (grandmother’s recipe). Clad in heavy-duty oven mitts, Christian carried The Bird the half-block home and four flights up.

And then all Hell broke loose. Turkey with stuffing, cranberry sauce, candied yams, wild rice, corn, cornbread, pumpkin and sometimes mincemeat pies plus Brown Betties. Many of the habitual guests chose something from our traditional menu to bring, so that I didn’t have to cook so much; my stove now had four burners and an oven, but still... Melinda always made the cornbread. Christine or Malilee made the desserts that weren’t pumpkin pie, which was my job - along with the stuffing and cranberry sauce and pumpkin pie. Other guests showered us with wine and champagne or flowers and chocolates. We spent hours at the "door-table", remaking the world. Many of those people are my friends to this day.
Thanksgiving was always marked with a red circle on their respective calendars. Now that I live in America part of the year - and usually all of November - I get hate mail from them complaining that I’ve deserted them and don’t love them any more and that they’re now bereft and turkeyless in a foreign land.
I miss them, too.

For a humorous explanation of Merci-donnant by columnist Art Buchwald - who worked for many years at the International Herald Tribune in Paris, go to:
A la Recherche du Temps Perdue
people.virginia.edu/~pm9k/Writings/artrech