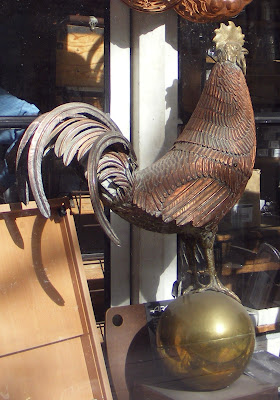 In France, whose national symbol is a proud rooster, there’s a right and a wrong way to do everything.
A good French upbringing teaches all little French children that they are superior to the rest of humanity because they alone know How to Behave. It is the cultural equivalent of the Great Wall of China; it is meant to keep out the barbaric hordes. 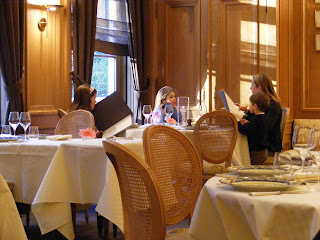 It determines that epic moment when you can move from shaking hands with someone to actually kissing them on both cheeks. It dictates when to address someone as "vous" and when it is permissible to switch to "tu" (the equivalent of "you" vs. "thee"). Madame Emilie Poste would have loved it. 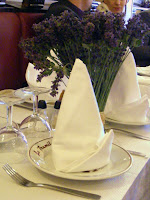 This etiquette (which, as you can see by its spelling, is a word of French origin) holds especially true at the dinner table.
For instance, you never cut your lettuce. You fold it. That’s why French salads always come with whole leaves of lettuce, much to the chagrin of tourists who set about with knife and fork, cutting away, thus irretrievably labeling themselves as (shudder) Foreigners.
Now it takes a certain amount of coordination to learn how to fold lettuce. I mean, you can’t use your fingers and then just pop it into your mouth. (Nor would you want to, with that drippy vinegar and oil dressing). The trick is to hold one end of the leaf down with your fork in your left hand and fold the other end over with your knife in your right hand. Then as you hold the slippery leaf in place with the knife, you spear the now-halved lettuce again with the fork, leaving enough room to fold the free end over again with the knife. You do this east to west and north to south until you’ve created a nice mouth-sized origami of lettuce, which you pray won’t flip open as you lift it from the plate to your mouth. The rule of thumb is, the crisper (and thus more resilient) the salad, the bigger your dry cleaning bill. My advice to beginners is: Avoid curly endive at all cost. 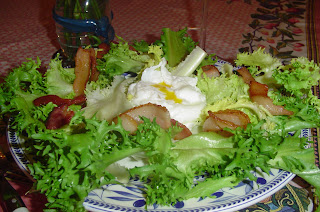 The leading mealtime faux-pas is The Hand in the Lap. Before being unleashed on Society, we were all taught by our mothers that you’re supposed to eat with your left hand nestled politely in your lap. Not doing anything. Just nestling. In France, such manners will raise eyebrows and perhaps a sharp and amazed intake of breath. Both hands should remain visible at all times, wrists resting vertical on the edge of the table whenever eating utensils are not in use. No forearm. And definitely no elbows, but that’s the same in America. (I remember being told, "If you’re fit and if you’re stable; Keep your elbows off the table.") I don’t know where this hard and fast Hands-above-board Rule comes from. Perhaps the French, a people known for being amorous, wonder whether you’re holding hands with your table neighbor. Passing love notes. Or worse.
But there is an Up side to eating à la française. Good news, American Eaters: you don’t have to switch your fork back and forth eternally between hands when cutting and eating. The left hand holds the fork throughout the entire meal, leaving the right hand free to wield the knife. Perhaps this is a throw-back to more dangerous times, such as the French Revolution, when there wasn’t enough bread to go around, or enough money to buy it, or both, and it was wise to remain armed and ready to defend your crusts at all times. After all, when informed that the French had taken to the streets because they didn’t have bread to eat, didn’t Marie-Antoinette comment "Let them eat cake", thereby demonstrating how far removed she was from the reality of her time? (She ultimately became ever more removed when her head was distanced from her shoulders by the guillotine for making just such statements. But that’s another story.)
So now off to the dinner table with you and practice your lettuce folding. Next week we’ll move on to peeling oranges with knife and fork.