In the Rear-view Mirror: Corot stolen from Louvre 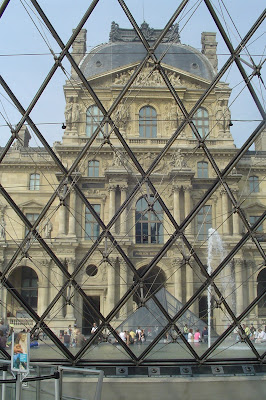 As it's getting on to Christmas (or Your-Holiday-of-Choice) and I'm behind in my wrapping of presents and writing of cards, BUT as I want to keep up a certain rhythm here in Sandy's France, I've decided to cheat and post a few old articles published over the now not so recent past to keep the flow going.  I hope you don't mind and will find them interesting.  Stay tuned for new stuff, because it'll be in here.  Just as soon as I become disentangled from all this gift paper, Scotch tape and colored ribbon.

Here's one from July 1999, when I was minding my own business, visiting the Louvre Museum, when all of the sudden...  Bells went off, massive doors swung shut and we were all locked in.
Being the curious sort, and already free-lancing for a newspaper, I set out to find out what was going on.  And this is what I learned.

PARIS - A painting by the French artist Corot was stolen today from the Louvre Museum in Paris, and thousands of people were detained as police attempted to search all visitors.
The painting, "Le Chemin de Sèvres", was taken from its frame in a small room on the second floor of the Sully Wing around noontime, but the theft was only reported an hour and a half later. Visitors in the immediate area were searched, then allowed to continue their visit. The decision was finally made to close all exits to the museum shortly after two o'clock and the 20,000 to 30,000 visitors who had taken advantage of the Louvre's free admission Sunday were blocked in the vast Pyramid entrance hall.

After nearly an hour and a half milling about with no explanation broadcast, the crowd turned angry and tried to force its way through the police line barring the stairs to the exit. The police shouted for people to move back after two small children were nearly asphyxiated. Fearing an incident like the Heyssel stadium in Belgium, where soccer fans were crushed to death by the crowd, officers then began lifting children to safety and escorting older and ailing visitors outdoors where medical units, including a reanimation van, were waiting to treat them. Shortly after that visitors were funneled up the stairway leading out of the Pyramid and searched one by one by reinforcements called in. Meanwhile Room 66 was cordoned off as police detectives searched for clues and museum curators were called in to assess the damage. One museum expert reported that fibers had been found on the empty frame, but no suspects were arrested and by 5 o'clock, with the picture still missing, the last of the visitors had been evacuated.
"These people were very organized," a museum official said. "They found a loophole in the system."
Orders went out for all museum guards to remain on the job and search the miles of corridors that are home to one of the largest art collections in the world. The museum will probably remain closed at least through Monday as the search continues amid hopes that the thief was unable to spirit the painting out of Louvre and it is still hidden somewhere on the premises.
Jean-Baptiste Camille Corot is one of the most famous French painters of the 19th century and a founder of the Barbizon School of artists. The stolen canvas, worth several million francs, was a landscape of Sèvres, one of the cities just outside of Paris.
This is the most valuable painting stolen from the Louvre since the Mona Lisa went missing several years ago. It was later recovered and is now on view behind glass, unlike all the other paintings in the museum. 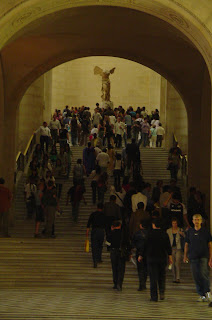 Post-scriptum:
This all bubbled back to the surface with an item I stumbled upon yesterday. Since this theft, a famous French art thief, Stéphane Breitwieser, who fancies himself to be the "Arsène Lupin of museums", was
arrested in 2001 for the theft of 230 paintings and objets d'art from European museums during an 8-year spree. And then released in 2005 after serving four years in a Swiss prison.  French newspaper Libération revealed that in a letter Breitwieser wrote from prison, he says he is the one who stole the Corot from the Louvre, but doesn't say what happened to it or where it is. Just that it is one of 50 thefts he committed in addition to the 230 that he confessed to.  But it's one that he doesn't include in his 360-page memoirs, Confessions d'un voleur d'art  (360 pp., Ed. Anne Carrière, 2006).