Recipe of the Month: Mendiants 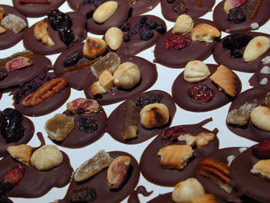 Now here’s a strange name for such a delicious chocolate treat: mendiant, which means beggar. Like most things, there’s a story behind it.
In the 13th century, after the Crusades, the Roman Catholic Church created four mendicant orders who relied totally on charity, like Buddhist monks. They were beggars of sorts. Then someone made a chocolate and called it mendiant, and decorated it with fruit and nuts chosen to stand for these four orders. There were dried figs for the dark brown robes of the Franciscans, hazelnuts for the reddish brown of the Carmelites, almonds for the white Dominicans and dark Malaga raisins for the black Augustinians.
Eight centuries later, people are far less religious. Although most of the French are born, baptized, wed and buried in the Catholic faith, these may be the only four times they attend church. For most of them, the connection with the monks has been lost. But they still love these sweet decorated disks of chocolate (sometimes white). They’re as much a part of Christmas in the south of France as the three Rois mages (Wise Men), and are served as the last course in the traditional Christmas meal of Provence, one of the "13 Christmas desserts" mentioned in the works of native son Marcel Pagnol.
In America, it seems to me this would be perfect for trick-or-treat. After all, the children are begging. But we’ll remain traditional and make them in December, either as holiday gifts or to end a festive meal on Christmas Eve or Day.
Besides, the decorating is a fun thing to do with children over the school holidays.


8 oz (225 g) of high-quality dark chocolate (at least 60% cacao) - Valrhona is an excellent chocolate for making these mendiants. Ghiarardelli is also good. But even Baker’s will work. Just make sure it’s dark chocolate and at least 60% cacao.
The other traditional ingredients are:
If you want to branch out a bit, you could use fruit other than figs, such as dried apricots, dried cranberries, and crystallized ginger or fruit peel (orange or lemon). And if you don’t like hazelnuts, try pistachios or walnuts (either whole if you’re making big mendiants, or walnut pieces for smaller ones). The trick is to mix and match the colors, shapes and textures. Prepare the toppings in advance. If you’re using many, you can use a muffin tin to organize them.
You’ll need a work surface to drop the chocolate on. A marble slab is very professional, but not absolutely necessary. A smooth, cool surface will do. Or even parchment paper. But NOT plastic wrap or aluminum foil.

- Cut your chocolate into smallish pieces and melt it in a bowl set over a small saucepan of hot water on low heat (a bain-marie). Stir it while it melts. Don’t take the microwave shortcut because that often gives the chocolate a dull color and a mealy consistency.
- When the chocolate is melted, take it off the heat. Let it cool until it feels pleasantly warm to your finger. That’s the right temperature. Drop small spoonfuls onto your surface. Shape them into round disks.
- After you’ve made a few, and while the chocolate is still soft, decorate them with the nuts and fruit, so they stick to the surface. Before making more, check the temperature of the remaining chocolate. If it’s gotten too cold and started to set, just put it back over the saucepan of hot water and stir for a bit.
- When you’ve finished a batch, let it rest until the chocolate is completely set. Then you can lift the mendiants carefully off the sheet. Meanwhile you can make another batch.

Some people go all high-tech about melting chocolate and have special chocolate-making thermometers. If you’re that way, you’ll want the chocolate to reach 120°F (50°C). Bring the temperature down quickly over an ice bath to 80°F (27°C), then warm it back up to 88°F (31°C). That’s "The Right Way". But you can pretty much do it with the naked eye and a fingertip. The only thing you may lose is a bit of sheen to your chocolate.