On the Road: Lyon's Automaton Museum

When you travel in France, there’s always a little jewel that you discover.
On my last trip to Lyon, I stumbled upon two lines in a magazine about a Musée des Automates, a museum with automated... automated what? They’re not toys. And they’re not puppets. But they are amazing and amusing. 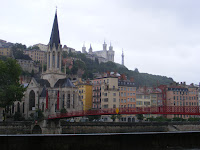 As this museum was just across the river from Brasserie Georges where I had lunch, I walked across the footbridge and hunted it out in the maze of medieval streets of Old Lyon.  You could easily walk past it because it looks just like so many other shops on the rue St. Georges. But inside it’s warm and bright, an atmosphere created by some Geppetto-like craftsman who loves to tinker with figures and make them come to life... and then can’t bear to part with any of them.
It all started after the war, in 1946, with two men who made these little figures to be sold or rented to store owners for their window displays. Then, in 1991 - maybe when all these little folk came back home to live, like college graduates - the museum was created. There were only four rooms then, but the craftsmen kept turning out these "little people", who took on a life of their own.
The process for making an automaton starts with the design. And then two different work phases take over: the mechanical work (gears, wiring, etc.) and the aesthetic work (modeling of the faces, especially). Finally, the finishing touches are added: costumes for the figures and a decor for the setting.﻿﻿﻿
﻿﻿﻿
﻿﻿﻿﻿﻿ 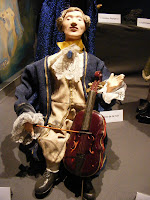 The result is 250 automatons bringing to life 20 different scenes, many from movies or historic events. Everything moves, down to the smallest detail. There’s Mozart’s Enchanted Flute and Millet’s Angelus, for the culturally-minded among the visitors. Literary figures include Gargantua and Victor Hugo’s Notre Dame de Paris, complete with Quasimodo, Esmeralda and her dancing goat. Movies are well represented too, with Peter Pan and Pinocchio and Pagnol’s card game. Plus there’s a circus.
Many of the scenes have a little touch of humor - a crocodile that moves in and out of a cave to attack Captain Hook or a tiny mouse that hides in a huge Swiss cheese as a worker drills the holes in it. And of course there’s Guignol, the puppet created here in Lyon and who now entertains children in puppet theaters across all of France.
﻿ ﻿      The "little people" chortle and whirr as visitors wander through the seven different rooms. Some scenes are more obvious to the French, but they all can be enjoyed. Harvesting wheat or grapes or making bread or hams or silk can be understood by everyone. And only the parents would care about that anyway; the children are just enthralled by the "moving little people", as one child called them while I was there.
It’s a fun hour, especially on a rainy day - which mine was. And it helps to keep the Child Within You alive.

P.S. On the way out, you can make some child infinitely happy by buying an animated music box. There are even some that would be suitable for adults.