A Day Out: Chartres 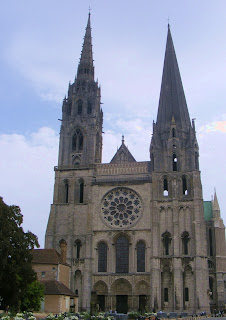 The region around Paris is rich in culture and beauty. Among the cities within an hour's drive or a short train ride is Chartres, with its splendid cathedral towering over the wheat fields of La Beauce, the granary of France. 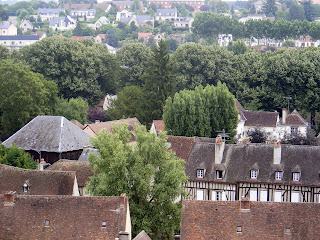 Lying between Paris and the Loire castles, the city was of major historic importance; France's only Protestant king, Henri IV, was crowned here in 1594 after converting to Catholicism. Many legends also surround Chartres, stretching back to the days when it was a major Celtic city where Druid priests held ceremonies around a well which now lies under the cathedral's crypt. Later came a Gallo-Roman temple where a statue of a mother-goddess was venerated. Early Christians saw it as the Virgin Mary and moved it to their basilica, where "Our Lady Underground" guarded all subsequent churches until it disappeared in the French Revolution. In 1360 the Virgin protected Chartres from the siege of England's King Edward III with a hail storm, and again in 1587 from the Huguenot Prince du Condé who unexplainably retreated after his cannons made a breach in the city's ramparts and victory was within reach. 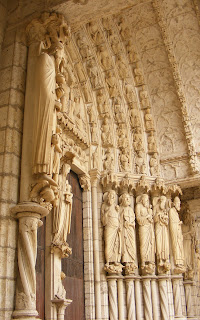 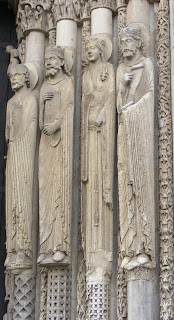 The present-day Cathedral of Our Lady, Notre Dame, stands at the highest point in the city, on the site of five previous sanctuaries destroyed by fire. It dates from the mid-13th century, the height of Gothic architecture, and is unique in its unity, perhaps because it took only 25 years to build. The sculptor Rodin called it the "Acropolis of France"; UNESCO lists it as a World Heritage treasure. Also unique are the cathedral's asymmetric spires: a shorter, simpler romanesque masterpiece on the right; a taller, flamboyantly rich Gothic spire on the left. The sculptures that grace both this Royal facade and the south facade are wonders of romanesque art, and while they depict Christ's life and the Last Judgment, the many Biblical kings and queens portrayed are probably modeled on the princes, barons and rich bourgeois merchants whose generosity built this monument to Christian faith.
﻿
﻿ 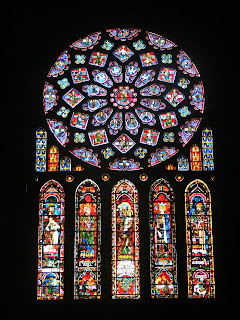 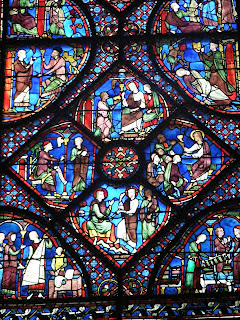 Light flows in through three magnificent rose windows facing north, south and west, and many more 12th and 13th century stained glass windows of unrivaled beauty, their distinctive blue named after the city. To be visible from afar, the figures of the upper windows are large, while the lower windows (one offered by the American Association of Architects in 1954) have more intimate medallions of the trades that created them. Some, like the window of St. Jacques behind the main altar, have been restored recently by months of painstaking labor. 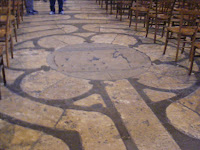 There is one place in the cathedral where Christianity meets paganism: the labyrinth. The center of its black and white geometric design marks one of the world's strongest points of telluric current, a force worshipped by the Druids, and at the summer solstice pilgrims from around the world follow its 294 meter long maze on their knees as they pray.

But although the cathedral is the gem of the city, there are other points of interest, such as the Musée des Beaux-Arts in the 17th century bishop's palace. This museum, which also schedules concerts, boasts a wide range of artwork: tapestry, medieval polychrome wood sculptures, a Vlaminck collection, a Celtic mask from the first century and a Tahitian tiki.
Tucked away north of the cathedral in a former stables is the International Center of Stained Glass, where fascinating displays explain how stained glass is made and colorful temporary exhibits spotlight works by selected artists from different countries.
Many narrow streets wind up and down the hill where the cathedral stands. A short walk will take you to the market (Chartres has been a market town for centuries) where you can buy food for a quiet picnic on the ramparts behind the cathedral with a view over the three branches of the Eure River below. Or try La Truie Qui File (The Spinning Sow) restaurant in a 15th century half-timbered house, where the menu features fine local cuisine.

On your way home, don't miss la Maison de Picassiette, a house built by a dreamer, where everything is decorated with colored shards of glass, mirror and crockery: garden, walls, furniture, even an old Singer sewing machine. Over 30 years of work to build a strange but striking creation unlike any other.

Note: I wrote this article in 1995. Since then, La Truie Qui File restaurant has closed, much to my chagrin. But the 16th c. building has been restored and the city of Chartres has transformed it into the Tourist Office. So the delicious meals are gone, but the upside-down sow is still spinning and the salmon that once hung over the fishmonger’s is still there.

Chartres is 77 km (48 miles) from Paris and there are many trains daily.  The trip takes about an hour and then it's just a 15 minute walk to the Cathedral, albeit uphill.
It's an easy stroll around the center of town, with lots to see and window displays that will call out to your wallet.
If you want to stay overnight, there are several hotels to choose from. 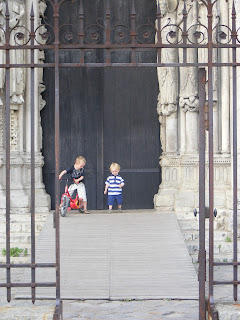 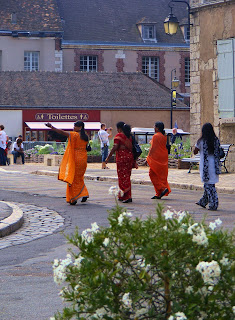