On the Road: Loire châteaux: Chambord 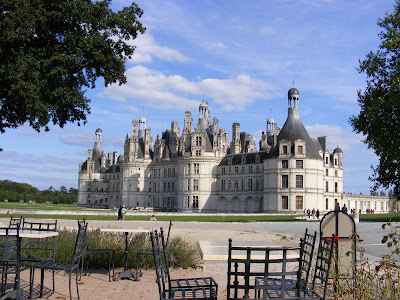 Chambord is the largest and most lavish of all the Renaissance châteaux, the forerunner of Versailles.
It was once a 14th century hunting lodge, razed by the folly of grandeur of King François I. He took the medieval design of a fortress and turned it into a masterpiece of Italian-style architecture. Its construction obsessed him. When the treasury ran dry and he had to pillage the church's treasures and melt down the royal silverware, building work continued. And even when François' two sons were taken prisoner by the King of Spain and he couldn't pay the ransom, building work continued. 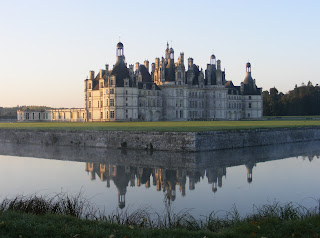 Yet ultimately François spent only 27 nights there and died before the castle was completed. His plans called for diverting the Loire River to fill the moats, but he had to settle for rerouting the Cosson.
Chambord has 440 rooms, the longest wall in France (31 km) and the largest walled-in park in Europe (5440 ha). Everything is the biggest, the brightest and the best. The most daring and innovative architecture of the time. Which is probably why the castle fascinated Louis XIV, the Sun King, over a century later when he arrived there on his honeymoon. 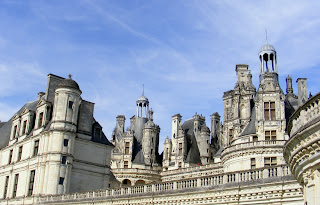 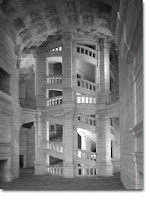 Work began in 1519, when François was only 25 and arrogant with his first military victories. First came the central keep in the form of a Greek cross, where the courtiers lived. From it a staircase led upward to the terrace roof, culminating in the fleur-de-lys, the ultimate image of earthly power.   It was from the rooftop terrace that the bored ladies of the court - who hated the place - watched as their gentlemen rode off to hunt in the surrounding forest, and there that they would gossip and sun themselves to drive the castle's dampness out of their bones.  Still, François loved it.  Thirty-five years later, he added on two symmetrical wings: one for his own apartments, the other for the chapel. A separation of royal power and divine.
But who was the architect? Some say Leonardo da Vinci, who was living downriver in Amboise at that time, although he died the same year construction began. Some sketches seem to bear his mark, and the general architecture is in his style. What is sure is that the staircase was built from a design by him: a unique double spiral staircase built around a hollow core, similar to a string of DNA. But as for the rest, no one will ever know how much is due to the Great Master. 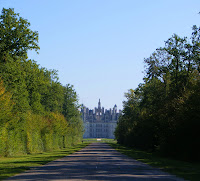 Chambord is a man's castle, intended primarily for hunters. Lots of forest and no gardens. Nothing to attract or distract the ladies.  When in residence, the court endured damp, piercing cold that resisted the castle's innumerable chimneys (one for every day of the year, it’s said).  Even in summer, it's cool inside.
Perhaps the cold is why Chambord was inhabited only a total 20 years out of five centuries. But during those 20 years, it hosted many illustrious names. On his journey from Spain to Flanders in the 16th century, Emperor Charles V was François' guest, marveling at "what human endeavor can achieve". Gaston d'Orléans, the brother of Louis XIII, spent his exile here for plotting against his regal sibling, playing hide-and-seek up and down the staircase with his daughter. When Louis XIV refurbished a wing for his own apartments in the 17th century, Molière followed the court, staging several of his plays to Lulli's music. The exiled king of Poland, father-in-law to Louis XV, lived here eight years in the 18th century. And it was here that the Duke of Bordeaux, pretender to the throne, gave up his dream of riding triumphantly into Paris as Henri V, the last King of France. 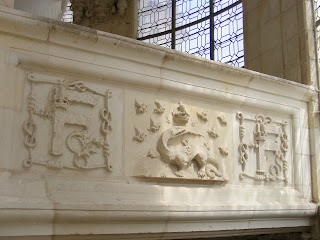 The French Revolution nearly destroyed Chambord, the symbol of the hated royalty. Its furniture was carted off and its floorboards ripped up. The government even planned to chisel away the main features of the decoration: the fleur-de-lys, the royal monogram "F", and the salamander. Luckily the undertaking would have been so expensive that the plans were abandoned. So was the castle. 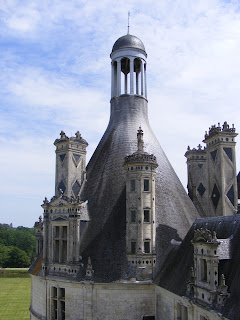 Why the salamander? At that period of France’s history, each king chose an animal to represent him. And according to medieval legend, the salamander has the amazing property of being able to extinguish fire without getting burned, just like the saints of the Bible. Thus François' emblem, and his motto, "I feed from the flames of good and extinguish the bad". And in case you missed the salamanders and royal monograms scattered by the hundreds throughout Chambord, François left his mark high above one of the rooftop windows in his wing of the castle: FRF: François, Roi de France (François, King of France).  As if he were reminding you that he built this.  Bow down, he commands.  Show respect.
Yes, Chambord is a huge castle, as huge as the ego of the king who built it.
﻿