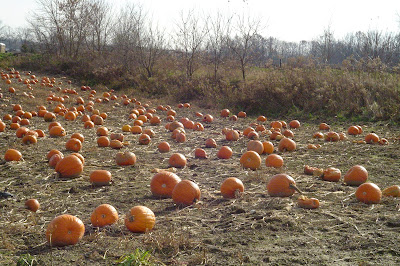 Any American who has lived in France for any length of time is familiar with this column that Art Buchwald penned in 1952 when he was writing for the International Herald Tribune in Paris.  But for those of  you who don't know it, here it is.  And happy Thanksgiving!

(This confidential column was leaked to me by a high government official in the Plymouth colony on the condition that I not reveal his name.)

One of our most important holidays is Thanksgiving Day, known in France as le Jour de Merci Donnant .

Le Jour de Merci Donnant was first started by a group of Pilgrims ( Pelerins ) who fled from l'Angleterre before the McCarran Act to found a colony in the New World ( le Nouveau Monde ) where they could shoot Indians ( les Peaux-Rouges ) and eat turkey ( dinde ) to their hearts' content.

They landed at a place called Plymouth (now a famous voiture Americaine ) in a wooden sailing ship called the Mayflower (or Fleur de Mai ) in 1620. But while the Pelerins were killing the dindes, the Peaux-Rouges were killing the Pelerins, and there were several hard winters ahead for both of them. The only way the Peaux-Rouges helped the Pelerins was when they taught them to grow corn ( mais ). The reason they did this was because they liked corn with their Pelerins.


In 1623, after another harsh year, the Pelerins' crops were so good that they decided to have a celebration and give thanks because more mais was raised by the Pelerins than Pelerins were killed by Peaux-Rouges.

Every year on the Jour de Merci Donnant, parents tell their children an amusing story about the first celebration.

It concerns a brave capitaine named Miles Standish (known in France as Kilometres Deboutish) and a young, shy lieutenant named Jean Alden. Both of them were in love with a flower of Plymouth called Priscilla Mullens (no translation). The vieux capitaine said to the jeune lieutenant :

"Go to the damsel Priscilla ( allez tres vite chez Priscilla), the loveliest maiden of Plymouth ( la plus jolie demoiselle de Plymouth). Say that a blunt old captain, a man not of words but of action ( un vieux Fanfan la Tulipe ), offers his hand and his heart, the hand and heart of a soldier. Not in these words, you know, but this, in short, is my meaning.

"I am a maker of war ( je suis un fabricant de la guerre ) and not a maker of phrases. You, bred as a scholar ( vous, qui êtes pain comme un étudiant ), can say it in elegant language, such as you read in your books of the pleadings and wooings of lovers, such as you think best adapted to win the heart of the maiden."

Although Jean was fit to be tied ( convenable à être emballe ), friendship prevailed over love and he went to his duty. But instead of using elegant language, he blurted out his mission. Priscilla was muted with amazement and sorrow ( rendue muette par l'étonnement et la tristesse ).

At length she exclaimed, interrupting the ominous silence: "If the great captain of Plymouth is so very eager to wed me, why does he not come himself and take the trouble to woo me?" ( Ou est-il, le vieux Kilometres? Pourquoi ne vient-il pas aupres de moi pour tenter sa chance ?)

Jean said that Kilometres Deboutish was very busy and didn't have time for those things. He staggered on, telling what a wonderful husband Kilometres would make. Finally Priscilla arched her eyebrows and said in a tremulous voice, "Why don't you speak for yourself, Jean?" ( Chacun a son gout. )

And so, on the fourth Thursday in November, American families sit down at a large table brimming with tasty dishes and, for the only time during the year, eat better than the French do.

No one can deny that le Jour de Merci Donnant is a grande fête and no matter how well fed American families are, they never forget to give thanks to Kilometres Deboutish, who made this great day possible.

P.S.
Every year of my ex-pat Paris life, I hosted a Thanksgiving dinner.  I invited my American friends, of course, but also guests from other nations:  fellow students from behind the Iron Curtain (a world totally foreign to me), Africans I'd met at UNESCO, islanders from the Caribbean from whence came my children's father... and even a smattering of British (I don't hold a grudge.)  We would take the door off its hinges, after removing the doorknob, and use it as a table to seat everyone - usually somewhere around 30 people.
The turkey - hard to find in November in France - was cooked downstairs in the friendly baker's oven because mine wasn't big enough.  Harry mixed up the egg nog, Melinda baked the corn muffins, someone pre-tossed a green salad, somebody else brought some cans of corn (which were pretty hard to find in the early years)... and I pretty much did all the rest:  cranberry sauce (another challenge to find cranberries), wild rice, candied yams, stuffing for the turkey and my grandmother's delicious clam chowder from scratch.  Many languages were spoken.  Many bottles of wine gave up their lives.  And a generally excellent time was had by all.  It makes for wonderful - albeit exhausting! - memories.
So eat hearty, and Happy Thanksgiving everyone!


(For another description of Parisian Thanksgiving, go to the listing of past blogs in the right column and click on 2011 and then on November, and you'll find it.)