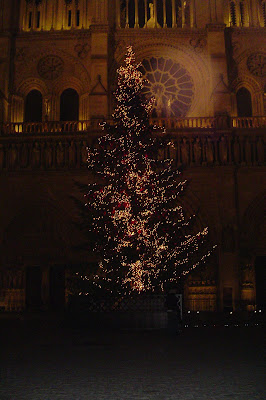 Well, it’s the final week-end before Christmas, and people on both sides of the Atlantic are running around in little circles, trying to find last-minute gifts for their loved ones.  That much is the same in France and in the United States.
But there are some differences.

Regarding children, the person French kids will be looking for on Christmas Eve is not so much Santa Claus - a deformation of the Dutch Sinterklaas - as it is the French version of England’s Father Christmas: quite literally, Le Père Noël. He comes on December 25th, whereas Sinterklaas comes on St. Nicholas’s holy day, December 5th. So Le Père Noël is more in line with "We Three Kings of Orient" - Les Rois Mages (Magi) - and the gifts they brought to Baby Jesus... although that would be Epiphany on January 6th. Are you still with me?
Like American children, French children also pass the year in review, worrying if overall they’ve been naughty or nice, in hopes that Le Père Noël will visit and leave them toys. But in preparation, they don’t hang up stockings by the chimney, with or without care. They either have traditional wooden sabots (clogs) or more modern slippers, into which they stuff hay for Santa’s rennes (reindeer). Although that custom is tending to disappear in favor of the odd apple, given the shortage of hay in Paris and other French cities. But that would be the traditional picture: sabots.  And once the hay was eaten, Le Père Noël would put your toys in your sabot, which pretty much precludes large presents, doesn’t it?
Santa comes down the chimney in France as he does in America. Most French homes do have a chimney, except for very new apartments. Both my old working-class apartment and now my artist’s studio in Montmartre were built around 1870 and they had chimneys; of course that was the only form of heating back then. In between the two, the apartment in the 19è arrondissement was built in the 1970s - when central heating had become the rule of thumb - and so had no chimney. Each apartment had a balcony though, and I presume children were told Le Père Noël came in that way.

On both sides of the Atlantic, the run up to Christmas centers on shops and stores which try to woo people through their doors to buy as much as their arms will carry. In the time-honored tradition of American stores, Parisian stores go to great lengths to make their windows eye-catching. Shops in each neighborhood band together to string lights up back and forth across the streets, and the counters of each shop are decked out in tiny lights and snowflakes and yards of fake white snow fabric. 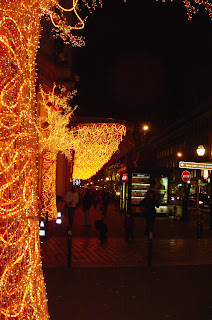 Most spectacular are the two side-by-side department stores on the Boulevard Haussmann - the famous Galeries Lafayette and Le Printemps - which are a thing of wonder. The décors are planned a year in advance and prepared in workshops sworn to secrecy; then the windows are dressed by early December.
As at least some of their window displays are aimed specifically at children, much animation is involved and a maximum number of toys available on the store’s shelves are put into action to entice parents to open their wallets. In fact, raised platforms are constructed along these window fronts so that Little Ones - les petits - can have greater visibility, their noses pressed right up against the windows. I remember taking my children to see them for many years, buying them a little paper cone filled with hot roasted chestnuts to keep their hands warm, bought from a street vendor with an ancient-looking charcoal contraption on wheels set up right there on the sidewalk. He knew a captive audience when he saw one!

The religion of the majority of French citizens remains Roman Catholicism, although most Catholics are lapsed, at best, and generally of the feminine persuasion. (It's said that a Catholic man will go to church four times in his life: for his baptism, his communion, his wedding and his funeral... but with many skipping a church wedding, even that number has dwindled. 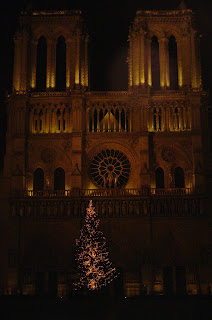 Yet Christmas is one of the days of the year when even non-church-goers sometimes grace the church with their presence. Unlike the U.S., where the Christmas service tends to be on the morning of the 25th, French Catholics hold their Christmas service on the eve... especially in the south of the country. There is much singing of traditional carols and sometimes re-enactments, complete with real shepherds (in the countryside, obviously) and real sheep.
For a real thrill, go to Notre-Dame for its midnight mass. The cathedral is aglow with lots and lots of candles, the organ will set your chest beating and the choir is joyous. But wear warm socks; the stone floor is cold and the chill will migrate right up your legs until you’ll be shivering in style.

In France, the big Christmas meal is eaten after mass, and the table is fairly groaning with goodies. Which is a good thing because everyone is cold and ravenous by then. 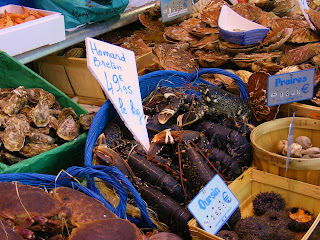 In preparation for the big meal, food shops are rife with the Holy Trinity: foie gras, huîtres (oysters) and champagne, all ending in the traditional bûche de Noël (Yule log) for dessert.  Oranges are also a traditional fruit to offer, an expensive rarity in the old, pre-refrigerated shipping days, and even up through World War II. Now more exotic tangerines and mandarins also grace the stalls on the sidewalk in front of the green grocer’s, and they add a splash of color to the otherwise grey Paris winter light. (The capital of France lies at the same latitude as Labrador, in spite of its notably warmer weather - it rarely snows - and so daylight makes only a fleeting appearance from 8:30 to 4:30... provided cloud cover doesn’t whittle that down even further.)
But it’s hard to dampen the spirits of a Frenchman bent upon celebrating, and every café-bar does good business at Christmastime. And now that cafés have outdoor heaters, you can sit on the terrace and people-watch even in the long nights of winter!

So next time you’re looking for something to do at Christmas, think outside the box and head to the City of Light, a name never more true than at Noël.