Recipe of the month: Quiche lorraine 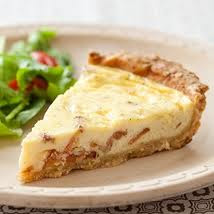 New Year’s Eve has come and gone, with its deluge of oysters and smoked salmon and foie gras, all washed down with lots of vintage wine and finishing with pâtisseries, chocolats and champagne. At least in France.
But after all the expense of Christmas and New Year, the pocketbook needs a rest. And the waistline needs a rest as well. So here’s an inexpensive dish that is still filling, and perfect for a cold winter’s day: quiche lorraine. 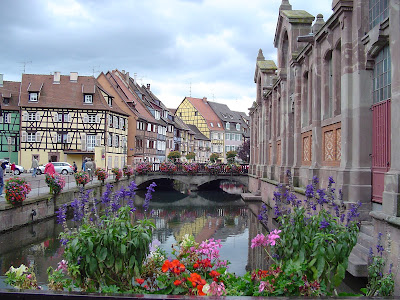 Who was this Lorraine? Well, it’s not a Who but a What. Lorraine is one of the 27 regions of France, and located in the east. When Charlemagne died, he divided up his realm between his three grandsons. (He outlived his sons.)  One of them, Lothair, got this part, and it became known as the medieval German kingdom of Lothringen. As of 1766, it became part of France under King Louis XV and the name was changed to Lorraine, although the northern part remained largely German-speaking. And French it remained until France was defeated in the Franco-Prussian War and Lorraine was annexed by Germany, along with Alsace. It remained part of Germany for almost half a century until the Treaty of Versailles ended World War I and it was returned. Then throughout all six years of World War II, Germany took both regions back yet again as an integral part of the Vaterland, and French language and culture became grounds for distrust, persecution, and even death.

In spite of this tug-of-war, Lorraine has strong French ties. The capital, Nancy, is the home of Art Nouveau, a genre abundantly found in the city’s architecture. The croix lorraine - Cross of Lorraine, with its double bars - became the emblem of the Free French Forces during World War II. And France’s modern-day hero General Charles de Gaulle, who led those Forces, is buried in Lorraine, in Colombey-les-Deux-Eglises.

So much for Lorraine? But what about that other word? Quiche comes from the German kuchen, which means "cake". Quiches were mentioned as far back as 1550, when they were served to the royal court in Nancy, the capital of Lorraine. They were cooked in cast iron skillets and had a slightly different look. The recipe as we know it today dates back only to the 19th century, but it’s been very popular throughout the country ever since... and even abroad.
So there you have it: quiche lorraine (pronounced "keesh low-ren"). Try it; you’ll like it. And don’t be afraid to experiment. There are many variations of this recipe but this is the original, aka traditional, one. A true cook from Lorraine will use all cream in making a quiche; only the faint-of-heart substitute half milk. Some people lay sliced Emmenthal or Gruyère cheese on the pastry shell before adding the bacon, but that would make it a quiche vosgienne, from the Vosges mountain region farther south. Others add thinly-sliced sautéed onions, but that would make it a quiche alsacienne, the other French region Germany and France squabbled over. You can do as you please, unless you’re a purist. That’s the beauty of the quiche lorraine.


- Preheat the oven to 375°F (190°C).
- While you’re preparing the filling, line the bottom of the shell with aluminum foil and pour in a layer of dry beans. This will keep it from puckering. Bake in the middle of the oven at 400°F (200°C) for 8-9 minutes, then remove the beans and foil, prick the bottom and bake for an additional 2-3 minutes.
- In the meantime, brown the diced bacon lightly. When it’s brown and the pastry shell is cooked, sprinkle the bacon evenly into the bottom of the shell.
- Beat the eggs, the cream and the seasonings together until they’re well blended. Pour into the pre-cooked pastry over the bacon. Don’t fill it more than 3/4, to allow for puffing.
- Set in the upper third of the oven and bake for 25-30 minutes, or until it has puffed up and browned. A knife should come out clean when inserted into the center of the quiche, but the custard should still move a bit.

Accompany with a salad, some French baguette and a cold white wine, with fruit for dessert.  (It’s also good cold, which makes it a delicious, low-fuss leftover.)

P.P.S. You can precook the shell ahead of time and refrigerate the filling. Half an hour ahead of time, put it all together.

P.P.P.S. For party needs, you can make these as tartlets (probably 6). Keep an eye on the cooking time, as they may cook faster, given their small size.