The tribulations of transatlantic travel


“Woke up, it was a Chelsea morning, and the first thing that I saw
Was the sun through yellow curtains, and a rainbow on the wall.”

You may remember the lyrics to that Joni Mitchell song.  Well, I just took the overnight trans-Atlantic flight to Paris, and I can tell you that any similarity between what I lived through and this song would be... well, not just grossly exaggerated but frankly and totally wrong.  My version would go like this:


“Woke up, it was a Roissy morning, and the first thing that I saw
Was fog and then the ground just 10 feet below.”

Not a brilliant start.  The flight itself had been ordinary, except for some turbulence - during the meal, of course - which got so bad they interrupted the dinner service.  I even had to stop watching the movie because we were bouncing around so much I started to feel seasick.  Or maybe that was because my stomach had been on empty for hours. 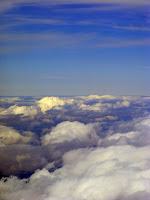 Anyway, we were descending through the clouds, and when you could finally see through them a bit, there was the ground!  Ceiling: 10 feet, max.  I’m sure the pilot could see nothing, which is always a scarey thought.
We landed on time at 11:10.  Things went smoothly for a while.  We were actually allowed to dock at the terminal instead of having to climb down that long stairway onto the tarmac and be bussed, bouncily, to the terminal, as has been the case for a few years now. (They’ve finally completed repairs to Terminal E, part of which caved in shortly after opening, killing one poor passenger.)  There was an amazingly minimal line at customs, and my suitcase appeared about 10 minutes after I got to baggage claim.  It was barely 11:30.
Then everything went to hell.

I know Terminal E like the back of my hand and proceeded unfailingly to the taxi stand.  There were some of those scabs who try to offer their “taxi” services inside, and I told them “no thanks” without even breaking step.  Often they're Russians with meter-less cars, trying to rip you off.
“There aren’t any cabs,” one of them yelled after me.
I kept walking.
But they were right.  One airport attendant stood at the stand, explaining to a handful of arrivals that there was a taxi strike.  Why?  Basically because of the scabs, who don’t have to take the same driving tests as licensed taxi drivers and don’t have to pay the fees either.  Or wait 2-3 hours in line to load passengers at the bustling airport.  So I decided to take the airport shuttle bus into town.  (In fact, I would have been better off taking the RER subway in, but hindsight is always 20/20.)
Walking back through the halls, there were the same “taxi” drivers milling about.  One of them must have recognized me from a few minutes earlier.  He smiled sneeringly at me.
I asked how much, out of sheer curiosity.
“200 euros,” came the answer (that’s about $265) -  for what’s usually a 50-60 euro trip, with tip.
“No thanks,” I said.
”She couldn’t afford it,” said another, his voice dripping with sarcasm.
“Yes, I can.  But it’s about the principle!” I shouted over my shoulder.  (Smart ass!)

Airport buses all come in close to the taxi stand, and Platform B is the bus to Opéra.  It’s the only one - to my knowledge - that is run by the bus company and not by the airport, which might explain the difference in price - only 10 euros compared to 17 - and frequency.  It’s also handiest for my destination.  There was no one there, so I figured I must have just missed the last bus but that there would be another fairly soon.
Wrong!
The next bus put in its appearance an hour and a half later.  At least I was at the front of the line - and so inside the bus shelter - because the fog turned to rain.  Gradually people crowded in until we were sardined under the canopy and the briskness of 7°C (45°F), welcome after the below-freezing cold of Michigan and the stuffiness of the plane, became a chill rising from wet feet all the way up my backbone.
After about half an hour watching airport buses come and go to other destinations, not to mention the colorful Disneyland buses that were plentiful, another impediment to the advance on Paris developed.  To add to the merriment, buses have to come down a ramp and make a 90° turn to reach the platforms.   But some idiot had parked his van near the bottom of the ramp, halfway blocking the turn.  Result:  the buses couldn't get by.  Inexorably, the access ramp clogged up with them, horns started honking, but no tow truck was sent out and no police ticketed the vehicle, so I guess the driver was justified to exercise his Right to Commit Creative Parking.  All this went on for an additional half an hour, and we could see several Opéra buses go by at the departure level above our heads, but they knew they couldn’t reach the platform below so they must have just headed back to Paris.  By the time the van drove off, freeing the flow of bus arrivals - none of them mine - I’d been in the line for an hour.
After an additional half-hour, now chilled to the bone by the humidity, a bus did appear and we all trudged on, except for a handful of late arrivals who were left mournfully behind.  All the seats were taken and the aisle was full of people standing, or sitting on their suitcases.  At 1:30 off we went, Paris-bound.  I thought my troubles were over.  30 minutes and I’d be at Opéra, where I could walk to the nearby Métro and be on my final lap.
“Erreur,” as the French would say.
The taxi strike was not just at the airport.  I found that out when the driver got off the expressway.  After inching along from traffic jam to traffic jam, and now blocked at a red light, he stood up and shouted out.  “For those of you who speak French, which means almost no one...” he announced, and went on to explain that the irate drivers were holding an Opération Escargot, a snail crawl on highways all over the country, and especially in and around the capital.  The expressway was completely blocked.  Instead of a 30-minute trip in from the airport, it took an hour and a half to reach our destination, during which time I nodded off several times and the young couple next to me missed their 3:00 train to Cherbourg.
At least the rain had almost stopped during the bus ride.  I trudged through the mist to the Métro, bumping my suitcase down the steps, and fished out an old ticket left from the last trip, a trick I learned a long time ago.  There was an escalator down to the subway platform and the train came within 2 minutes, as posted, and it was a straight shot to my stop.  Small mercies.
“Please, Lord,” I prayed in my head.  “Let the elevators be running.  At least one of them!”  And one was.  (The Abbesses stop is the deepest in all of Paris, 280 steps that I once had to carry my suitcase up until a young man rescued me in mid-ascension and carried it the rest of the way.)  When the elevator reaches the top, there are still about 30 steps left to street-level, but I made it with help from some ladies I’d convinced to wait for the elevator by telling them how many stairs lie ahead.  It was only fair.
It was still almost raining, but I decided to pull the suitcase up the final steep slope of Montmartre and brave the 10 steps to the cobblestoned square at the corner of my street.  “I can do this,” I kept telling myself, but the lack of sleep over the past two or three days had taken its toll.
And then every good deed I have ever done over my entire lifetime paid off.  The little local hill-climbing Montmartrobus passed by, heading for the bus stop just ahead.  I managed to break into a trot somehow, but it started to pull out as I drew even.  I banged on the side of the bus, and the driver stopped.  It seemed a moral victory somehow, the hand of a Great and Magnanimous Supreme Being who said, “this poor soul has had enough”.  And I had.  The mini-bus wound its way back and forth, up and down the narrow streets of my neighborhood until it reached the stop at the Correct Altitude for my building and I got off, tossing a heartfelt “Merci bien!” over my shoulder to the driver.
Down the passage, around the corner, suitcase bouncing over cobblestones desperately in need of a repaving.  Now remember the new door code.  Then drag my tired self through three doors and across the courtyard, through my sticking-in-the-humidity gate and I’m home.
And it only took me 4½ hours.  7½ hours to zip across the Atlantic, 4½ hours to slog in from the airport.  A new record, and I don’t mean that in a good way.