Recipe of the month: Garbure

This is the February recipe two days early,
to leave time to write something for the Chandeleur, which is on Saturday. 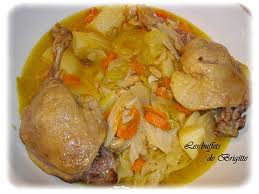 It’s winter.  It’s cold.  Fresh produce is non-existent.  Except for root vegetables.
So how about a recipe perfect for all the above?
Although France is (regrettably) changing, and “global” is a word that can increasingly be applied to cooking (enormous sigh!), there is still a tendency here to cook with the seasons.  Which is where traditional, regional recipes have a role to play.
The southwest of France has a lot to offer.  The snowy summits of the Pyrenees are a wonder to behold, still untamed and often untameable. Through its passes marched Charlemagne to fight the Moors in Spain, passes still taken by Christian pilgrims and simple hikers traveling the road to Compostella.  Near the Atlantic, the Pyrenees become more calm as they enter Basque country and plunge into the sea south of Biarritz.  But “up-country” lie Béarn and Bigorre, renowned for ski resorts, thermal spas and, of course, Lourdes for the faithful.
February’s dish is typical of this mountainous region.  It’s one that would be familiar to native sons Athos, Porthos and Aramis, the Three Musketeers of Alexandre Dumas - all probably raised on garbure.  (The fourth musketeer D’Artagnan, as well as Cyrano de Bergerac, were both from neighboring Gascogne, where the dish was also known.)  Still today, in mid-September, the town of Oloron-Saint-Marie hosts the World’s Garbure Championship, because people from Béarn take their national soup very seriously.  This recipe is based on one by homeboy Chef Sébastien Sanjou, who comes from Tarbes, next door to Béarn. 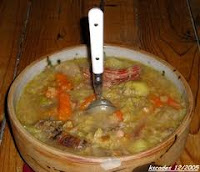 Garbure isn’t a dish for sissies.  It’s a full-bodied soup, a meal in and of itself.  French comfort food.  It’s said that when the spoon stands straight up in the bowl, it’s perfect!  And like all respectable soups, it’s even better the second day, when you heat it back up.  But be sure to keep it in the refrigerator because cabbage is a powerful fermenting agent.
A word here about beans.  This recipe calls for haricots tarbais, which chef and fellow ex-pat David Lebovitz calls “the holy grail of beans”.  They’re white beans that cook fairly fast because they have a thinner skin than most.  That means navy beans would be best.  Great Northerns would also work, but will need a bit longer to cook.  If your water is hard, add a pinch of baking soda  to the cooking water.  And as with all dried beans, never add salt until after they’re pretty well cooked, because salt prevents the bean from softening so it can absorb water.
Confit de canard can be found in specialty shops.  If you don’t have that possibility, just use some cooked chicken thighs for the duck.  Other substitutions are olive oil for the duck fat, non-smoked pancetta for the ventrêche and spicy paprika for the piment d’espelette.
There you have it.  An easy soup to make, but you have to start a bit ahead, with down time between the stages.  But then soup stock is always better the next day.  So fire up the stockpot and travel in your mind to the wilds of Béarn.  And like Porthos, when you get down to the last bit of garbure in the bottom of your bowl, add a splash of red wine to make a chabrot (shah-bro) and drink to the health of the Musketeers. 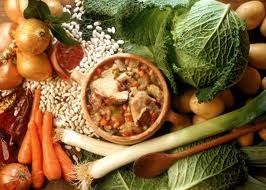 - The night before:  Cover the beans in cold water and let them soak in the refrigerator overnight.   When you’re ready to make the soup, drain the beans and rinse them.  Remove any skins or stones.
- Cutting up the vegetables is important because it affects how they cook down.  The carrots and the celery should be diced small (½" square) while the turnips, onion and potato can be bigger (1" cubes).  The leeks should be cut diagonally into 1" long pieces and the cabbage into 1" wide strips.
- Heat the duck fat (or olive oil) until it’s sizzling.  Add in the turnips, carrots, onion and celery and cook until they’re soft but not colored.  Add the potatoes and cabbage.  Sweat them for 5-6 minutes but don’t brown.  Add the leeks and cloves.  Stir.  Then add the beans and cook for another 5-6 minutes.  Cover with water, add 2 t coarse salt (the meats will be salted already) and some fresh-ground black pepper.  When it comes to a boil, lower the heat, cover and simmer for 3 hours.
- Let the soup cool until you’re ready to eat.  If the soup is meant for the next day, put it in the refrigerator overnight.
- When it’s time to eat, reheat the soup.
- When it’s hot, add the garlic, parsley and bacon into the soup.  Simmer for 5-7 minutes.  Then add in the rest of the meats and let it all simmer for 15 minutes.
- Pour the garbure into a festive soup tureen.  Toast the bread and top with sheep cheese while still warm.  Sprinkle piment d’espelette on the toasts and in the soup.

Serve piping hot, accompanied by a full-bodied red wine.  Why not a Madiran, which comes from the region?