When I went to sleep last night, the snow was about halfway gone.  When I woke up this morning, it was bright outside the shutters and I thought “SUN!”, and smiled.
Then I opened those shutters and...
SNOW EVERYWHERE!  And more still coming down, softly but inexorably. 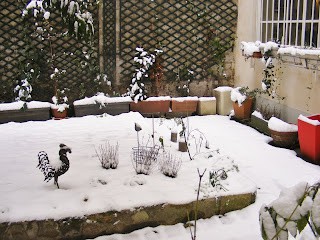 I lived in Paris for 37 straight years and since I started doing the bi-continental thing I’ve even over-wintered here some years since then, so I’ve seen snow before in the City of Light.  But in all those years I could count on the fingers of one hand the times when it’s lasted on the ground more than a day.  Now I need a second hand.
And it’s scheduled to snow every night all week.  What a brilliant time for me to leave my boots back in the old U.S. of A.!

Last night I was supposed to take the train out to the suburbs for a dinner party with old friends.   Raclette on the menu, which is a perfect meal for an Alps-weather night.  But like Zermatt or Val d’Isère, Montmartre is not located on a plain.  Its slopes often have a gradient of 8%.  Maybe more.  Not to mention the cobblestones, which are probably the origin of the warning: “slippery when wet”.  It’s the formula for disaster: 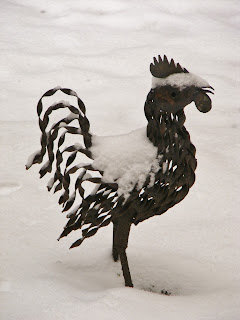 People don’t shovel the sidewalk in front of their buildings nowadays.  That’s because there aren’t any concierges to do the shoveling anymore.  The tiny studio apartments that used to go with the job are now rented out to university students.  (The one across my courtyard had a party last year with about 20 guests - Lord only knows how they even fit in that room - and woke everyone up at 2 a.m. singing - at the top of their lungs - the theme song from the “Captain Future” cartoon.  “Ca-pi-taine Flam tu n’es passsssss de no-tre ga-la-xieeeeeee...”)
But I digress.  No concierges?  No snow shoveled, no salt or sand scattered on the pavements.  And you can definitely not plow cobblestoned streets.  Plus, in my case, no boots (see above).  So I called off the Polar Expedition.  Which was wise, as it turned out, because I’d have had the Devil’s own time getting home up the hill! 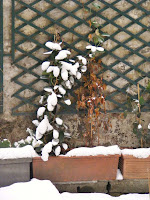 Today, outside the window my garden is cloaked in fluffy white snow-fur.  My cooking herbs are huddled in their pots.  The shrubs are bent under the weight of their mantle of snow.  The tree has protected some of the greenery, but one flowering vine I planted last summer isn’t made for these climes.  I should have read the tag before I put it in the ground because if it were in a container, I could bring it inside.  So far it looks fine, but in a week or so we’ll see what the arctic cold of these past few days and now the snow have wrought.

Years ago, when I lived across from the park at the bottom of the Sacré-Coeur steps, my son and his then-wife and his best friend snuck out and climbed over the fence and built a little snowman.  They came back all rosy-cheeked and proud of themselves, and admired it from our window until it finished melting a few days later.  I wish I had a photo of it. 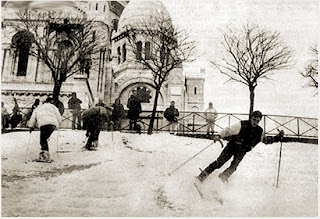 Another year people came out with skis and sleds and turned the Butte Montmartre into a winter resort.  The park gates were always locked when it snowed, so the city couldn’t be sued in case of broken bones.  But the fence wasn’t really high enough and people climbed over it in spite of its spiked top.  The funicular that runs along the left side of the hill became the ski lift.  The only thing the Alps had on us was the height of the slope.
Today it ended up snowing until 5 pm.  Tomorrow I’m going outside and make a snowman on my patio.  After I buy some boots.  But for today, I’ll just sit here on the warm side of the window and enjoy my cup of tea. 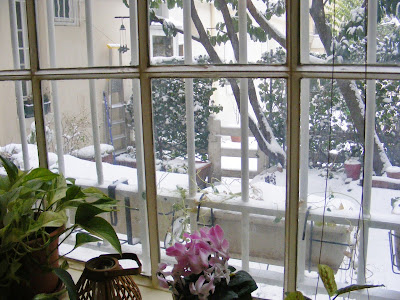 
At 2:12 the snowboarder rounds the curve at the corner of my street, and at 2:50 he heads downhill from the square where my local bakery stands (see Pat-a-Cake, Sept 14, 2012).  This was shot in December of 2010, but it’s basically the same thing this time around.

(DISCLAIMER:  Neither the ski photo nor the video are mine; the rest is.)