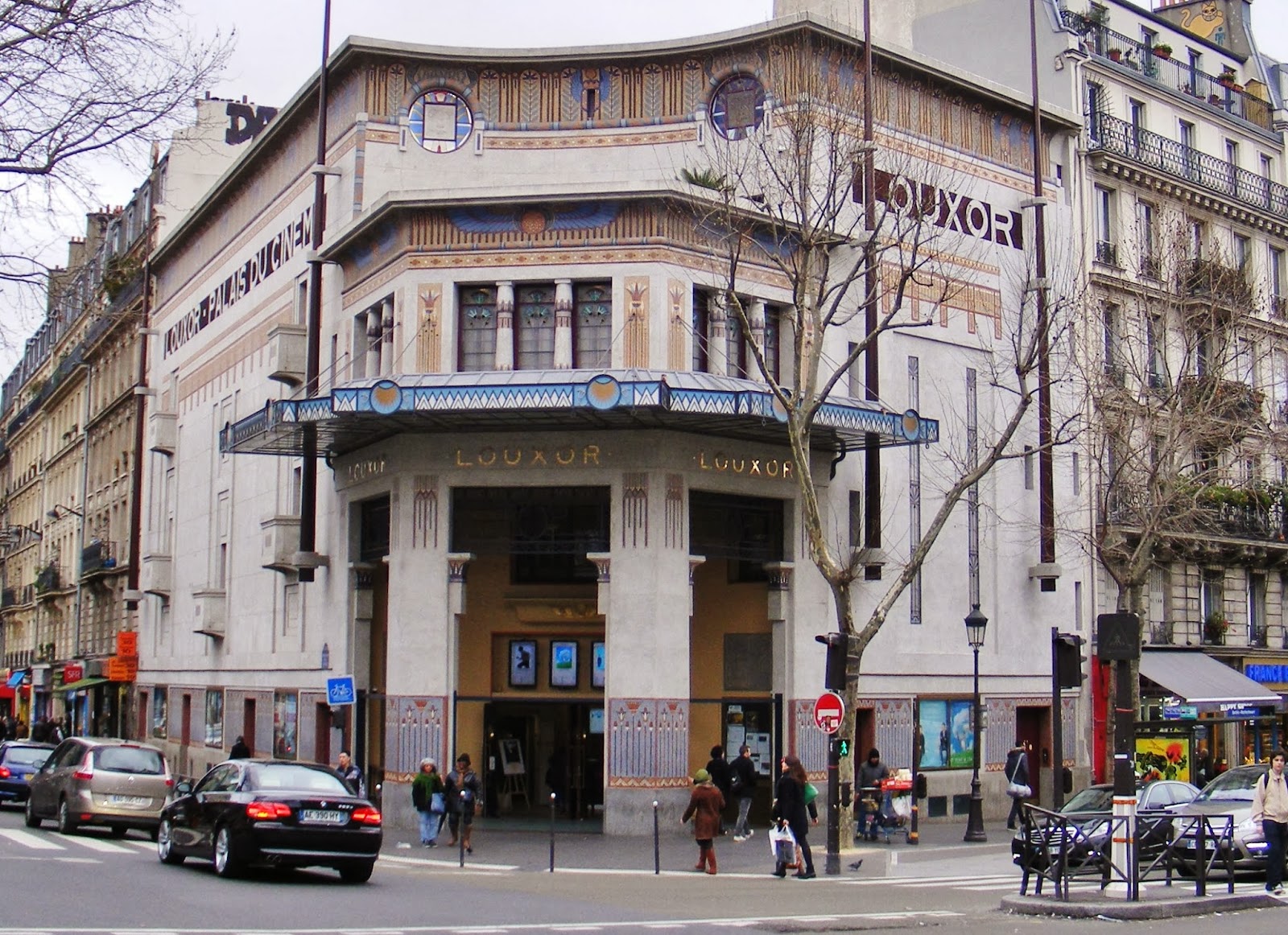 The Boulevard de Rochechouart is the southern boundary of the Butte Montmartre.  Along it, several small movie theaters provided a moment of escape for generations of humdrum lives.  With the change in the urban population and in its leisure habits, especially with the advent of television, one theater closed and was transformed into a mini-mall of cheap clothing shops.  Another - the Trianon, once a popular music hall - limited its programming to only spaghetti westerns and kung-fu movies.  And the third, the biggest, and nearest to what has become the Arab Quarter, took to showing Arab movies.  That was the Louxor. 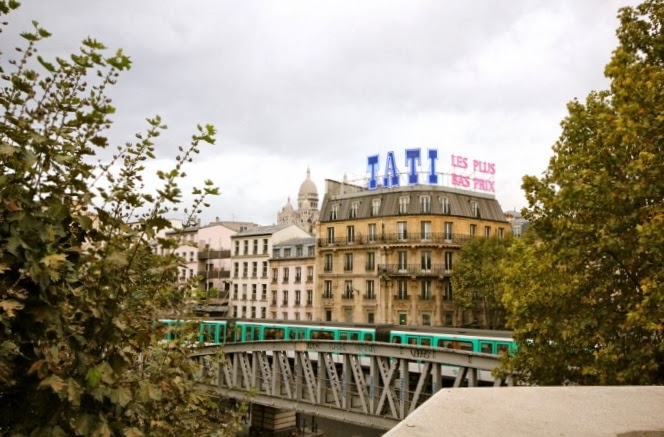 The corner where Boulevards Rochechouart, Barbès and Magenta meet, and where the elevated Métro rumbles overhead, is best known for teeming crowds of shoving shoppers quarreling over bins of bargain basement clothes in front of the Tati stores.  (And here I can’t help but hear an old friend, since deceased, whose rich family sent her to “summer in Paris” ever since she was a child in the Roaring Twenties.  When explaining to someone what Tati was, she said, “Oh, my dear, that’s tatty... and it is, too!)
But I digress. 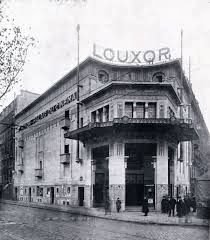 The Louxor - “Palais du Cinéma” - is a citadel of cinema that has lorded it over that corner since the very start of those Roaring Twenties.  It looms where a department store once stood.  Crowds poured in as soon as the doors opened on October 6, 1921.   The huge theater had an orchestra section and two balconies and could seat 1,195 people... who were allowed to smoke as they watched the silent movies, often accompanied by a full orchestra.  Newsreels and sometimes live acts were included in the price of the ticket.  It was an immediate success.
In 1930, French film giant Pathé took over the Louxor and covered its neo-Egyptian decor with neo-Greek furbishings.  By then, talkies were the thing and all the hit Pathé films played there.  But the neighborhood and movie-goers gradually changed, and in 1954 the theater turned to B-movies to bring in a crowd, a solution cheaper for both Pathé and its clientele.
In the 1970s the once regal theater slipped down yet another peg... or five.  The audience was no longer French and programming switched to Indian or Arab films, with or without French subtitles.  In the dark theater, drugs were sold and ladies of little virtue plied their wares in competition with the film. The bathrooms were also very... popular and there was a constant to-ing and fro-ing up and down the aisles while the film played, according to one ex-manager from those hectic days.  But in spite of that, the Louxor was classed as a Historical Monument in 1981, thanks to its decor, and that saved it from demolition. 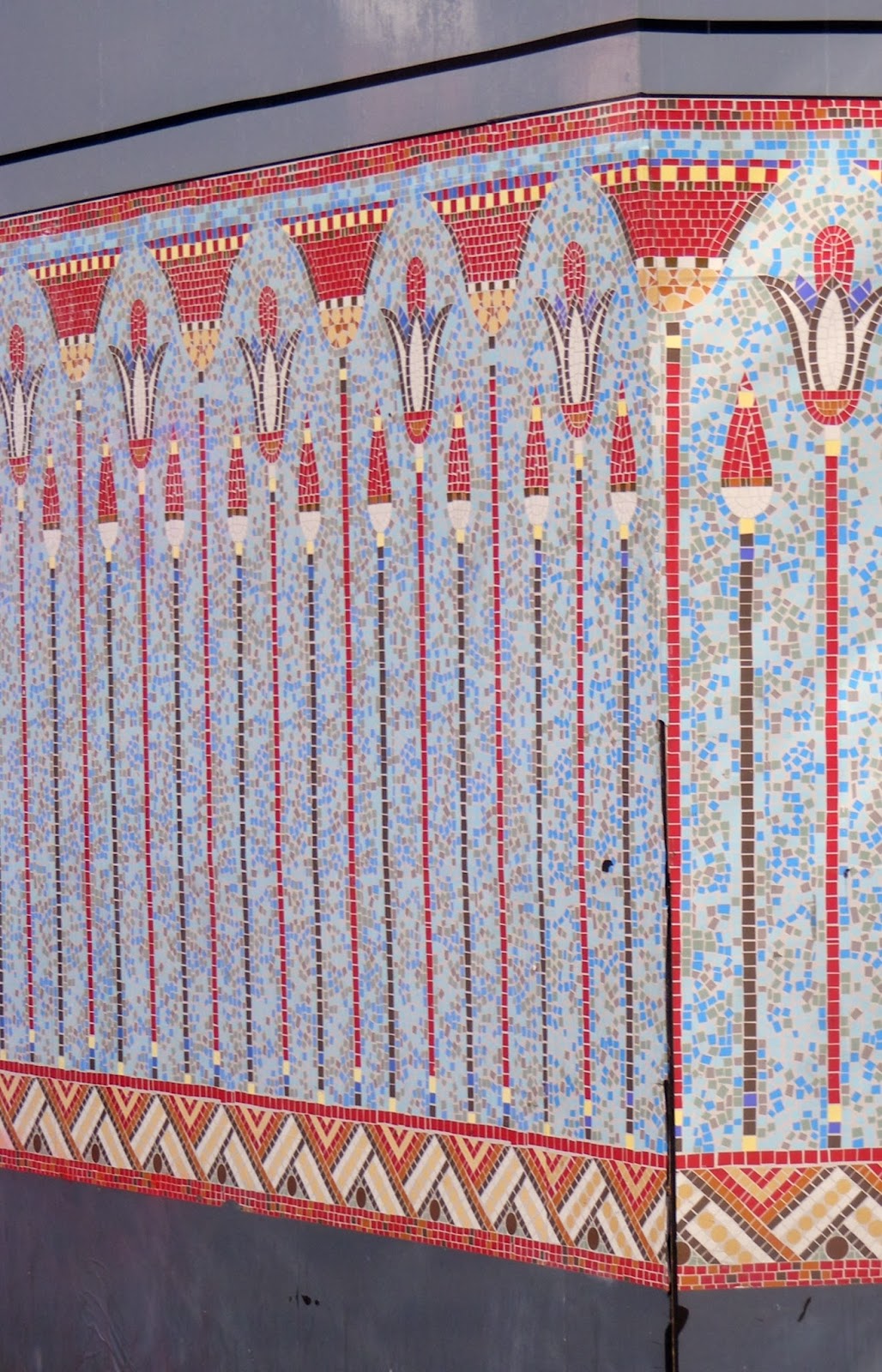 Finally, in 1983 its career as a theater came to an end with its sale to Tati (see above).  Plans were to group their various shops into one building but they couldn’t make it work architecturally for the money they were willing to shell out.  So after two years they cut their losses and sold it.  That was followed by another two years of reprieve as a discothèque - La Dérobade - and then a gay discothèque - Megatown. But even that wasn’t working.  In 1987, Megatown closed and the once-mighty Louxor turned into a sort of cinematic Sleeping Beauty.
Until 2003 when its Prince Charming in the guise of Paris mayor Bertrand Delanoë bought it with the firm intention of restoring some of its past splendor in a neighborhood Paris was trying to rehabilitate.  Delanoë’s personal interest in the building probably dates back to the 1980s and his days as a député, (the equivalent of a British MP or an American Representative) for the 18th arrondissement just across the elevated Métro tracks from the theater.  I remember seeing him frequently at events at the sports facility where my children trained in gymnastics. 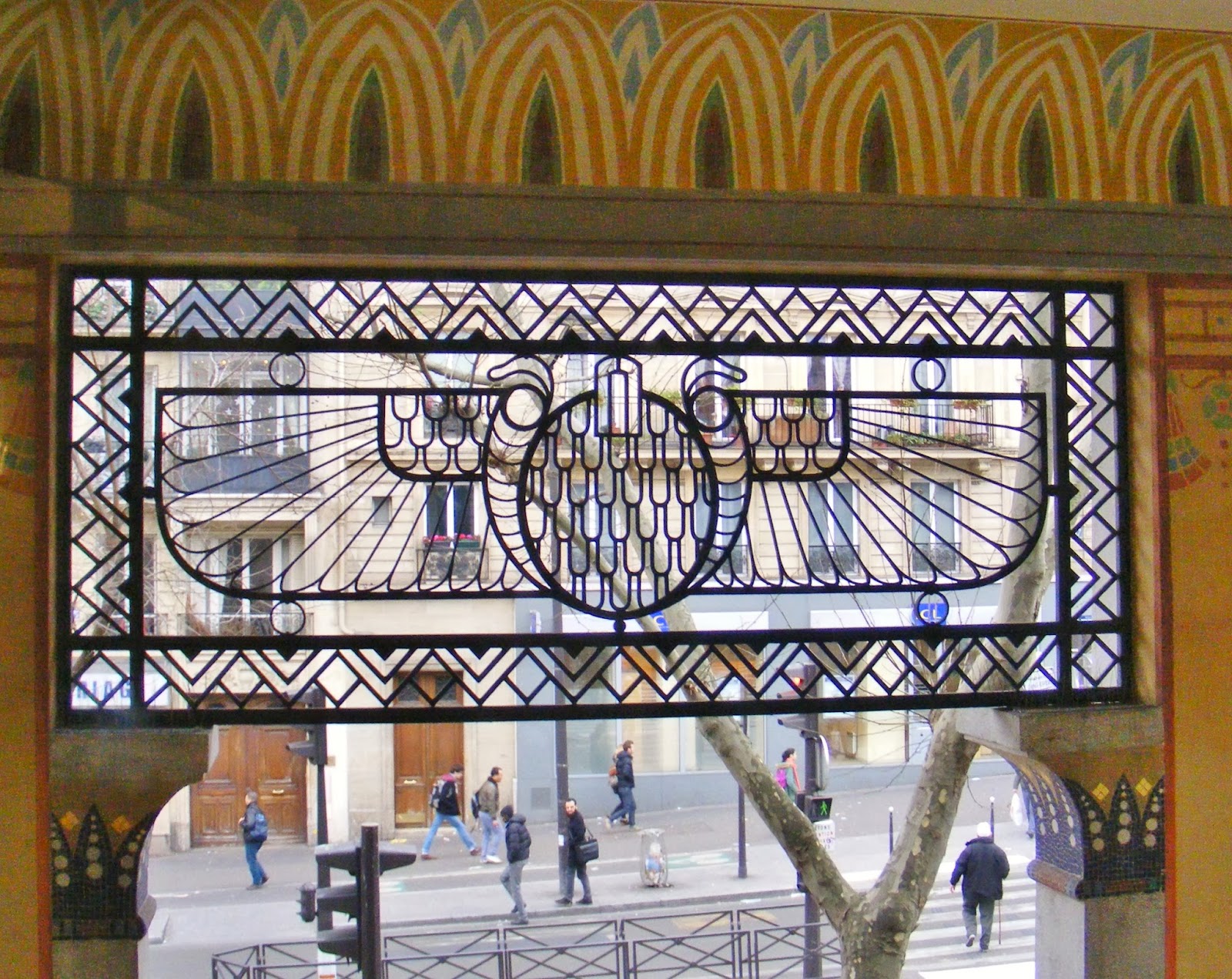 But the job was too big even for a mayor, Prince Charming or not.  It took seven more years to pull funding and a crew together.  Renovation work began in 2010.  One major hurdle was that the building had been closed for 26 years. During that time, its facades served as billboards for elections and the city’s daily power-washing to remove the campaign posters also removed the glittering mosaic work.  It was a time-consuming, detail-oriented labor of love to replace them, filled with almost insurmountable challenges.  But finally the Louxor reopened on April 18, 2013.

So far it’s been a success.  That’s largely due to a multipurpose approach.  In addition to the Art et Essai art-house movies, it shows reruns of epic films.  ("Jaws" and "Saturday Night Fever" are slated soon.)  There are classes on the cinema and even festivals.  The theater management also works closely with neighborhood schools and offers a movie series for children, with animated and PG films from around the world.  Special “meet the director” events are also on the schedule and the three rooms can be rented out for events. 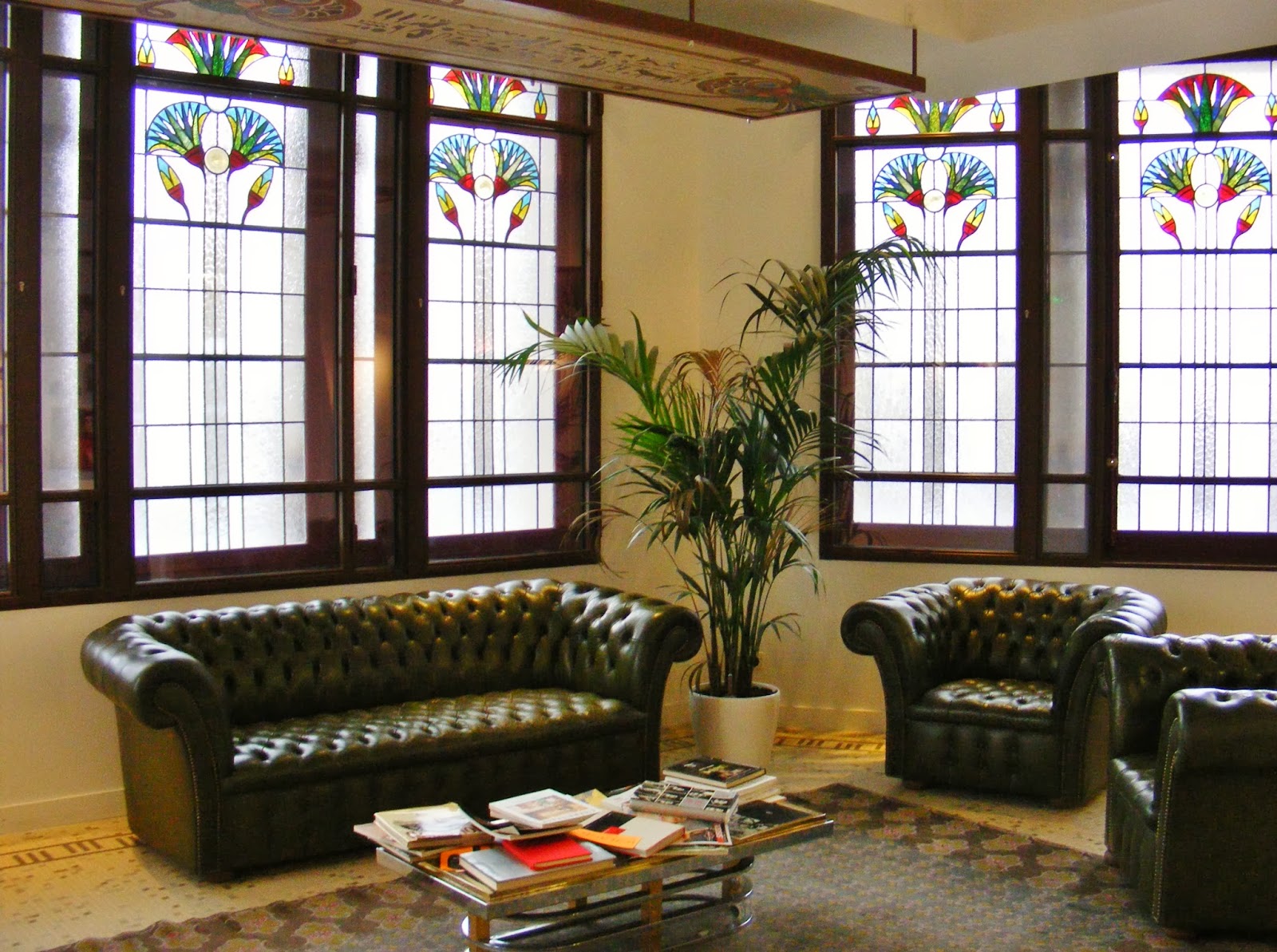 There’s a bar on the top level, complete with Art Déco light fixtures, but only for movie-goers. It’s open from 4 to 10 during the week, and earlier on week-ends. And there’s a lounge on the middle level, with Comfy Chairs (and sofas) that would do Monty Python proud.
Another reason for its success lies in breaking up the one large auditorium into three screens, to allow it to operate as a mini-multiplex.  The largest of the three was restored to its original 1921 neo-Egyptian decor and has been named after famous Egyptian director Youssef Chahine.  Screen 2 has a starry sky ceiling and is meant to represent the Valley of the Kings.  Screen 3 has a vaulted ceiling and is decorated in red tones. 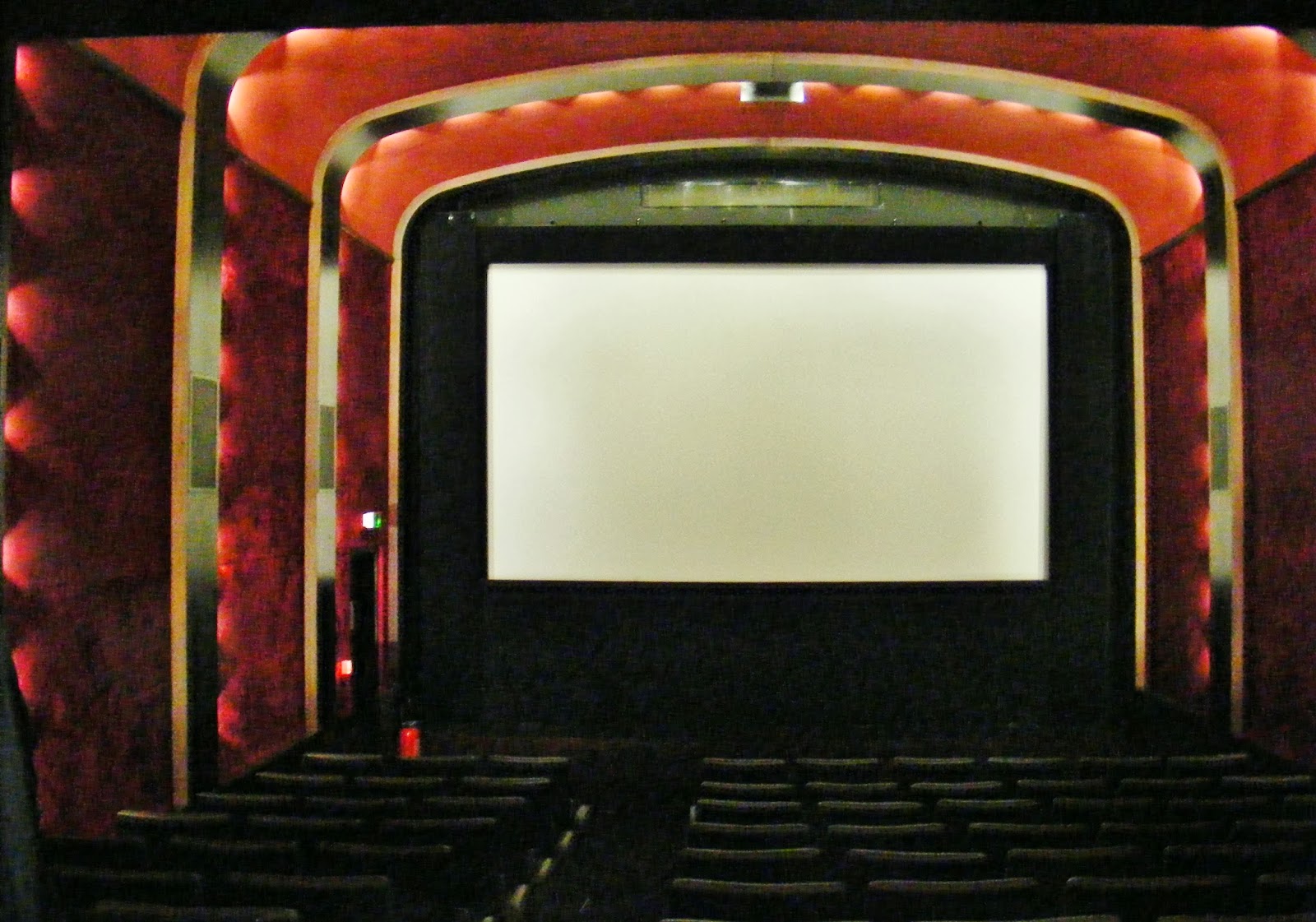 Another Art et Essai theater a little farther up the Butte and to the west is the Studio 28.  I wrote about it in a blog on Feb. 6, 2012.  It opened seven years after the Louxor, but has been operating continuously ever since. Both have their charm, but the Studio 28 is an intimate setting, whereas the Louxor... well it was intended to be monumental, just as the Pharaohs would have wanted.  And the City of Paris has done an excellent job of making that a reality. 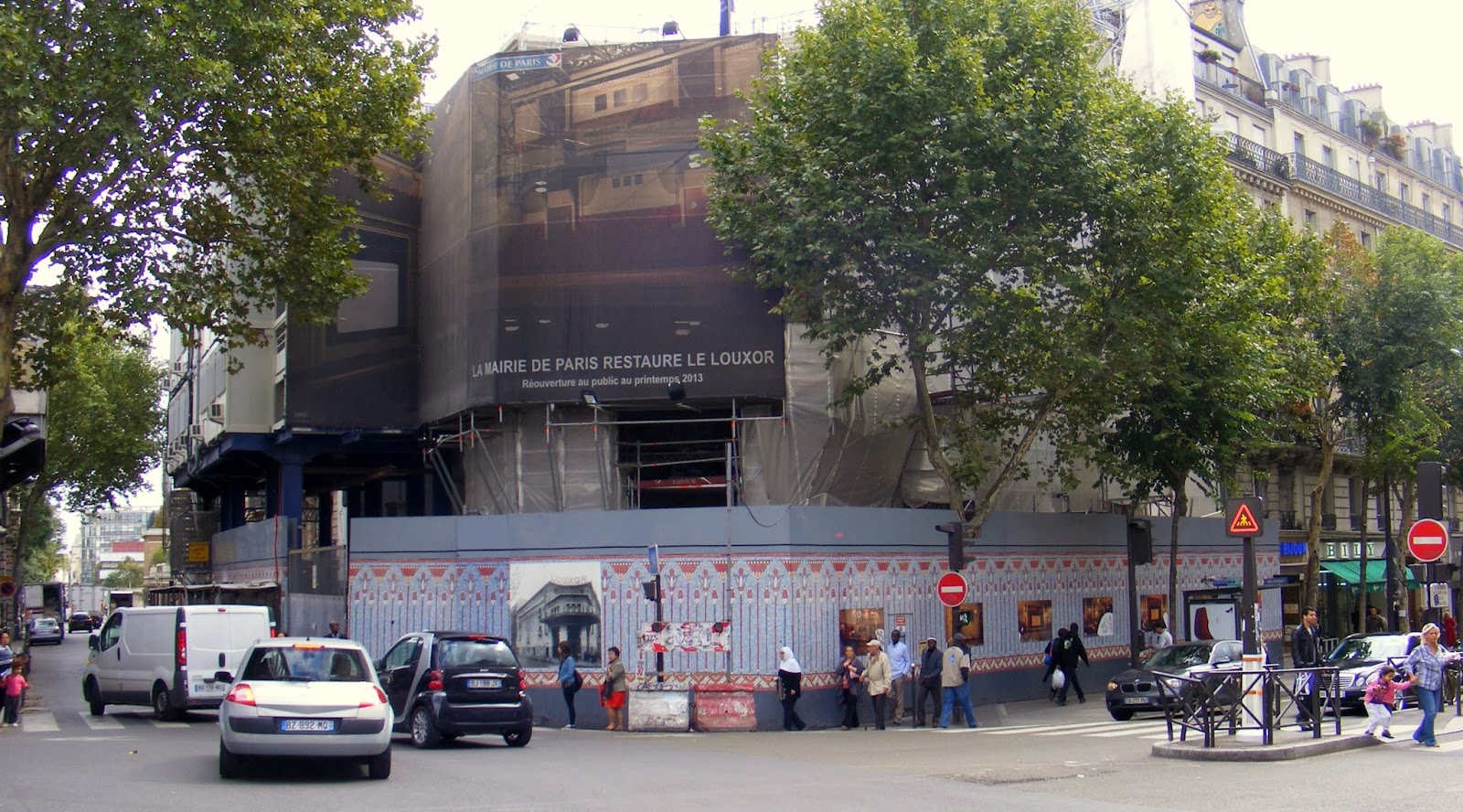 For a video of the theater and the renovation work, go to the link below.  It’s in French but the images tell the story just the same.
http://www.dailymotion.com/video/xz1446_le-louxor-nouveau-cinema-a-barbes_shortfilms