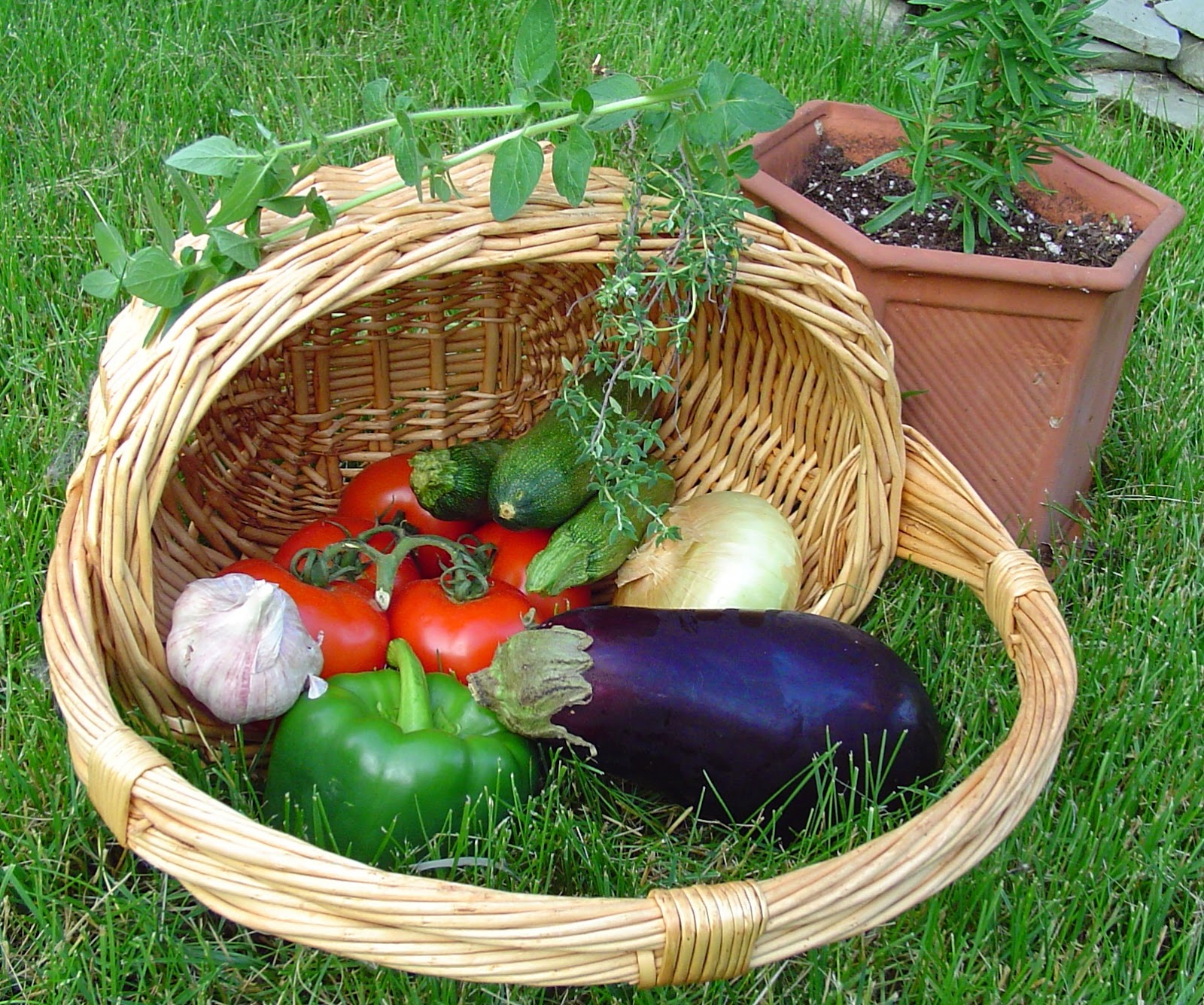 A few French recipes have crossed the Atlantic. Among them is ratatouille, a recipe from the south, and more specifically from Nice (rhymes with “peace”).
I have yet to find a French cookbook without a recipe for ratatouille.  It’s mainly a summer dish because it can really only be made from fresh produce.  Canned or frozen just doesn’t cut it.  That’s because you have to cook the various vegetables together so they can talk to each other and get acquainted.  If you just bung them all in the pot, already cooked, they won’t have much to say when you dish them up.
There is heated discussion among French chefs as to whether you peel the vegetables or not, whether you cut them up into large or small pieces. Whether you cook them separately and then finish them off in the same pan, or whether you cook them together from the start.  But one must is that you stew them rather than fry them.
There’s also conflict as to which herbs to use.  Julia Child uses only parsley.  Raymond Oliver uses a blend of fines herbes.  To my mind, you can’t make a ratatouille worth eating without at least thyme and preferably a bay leaf or two.
One huge advantage of ratatouille is its versatility; you can eat it hot or cold.  And if you choose to eat it cold, another advantage is that you can make it in advance.  Hot, it goes perfectly with grilled fish or simple meat dishes: roasted or broiled beef, lamb or especially chicken.  Cold, you can serve it with cold meats or spread a bit on toasted bread to make bruschetta appetizers.
Everyone has their “correct” way to make ratatouille.  This is mine.  I prefer it not to be totally cooked down and mashed, as does Fernand Point, unless you’re going the bruschetta route.  Which is why I follow the niçoise tradition of not peeling the zucchini.  I figure they should know because they invented this dish.  I also like the eggplant to keep its shape, so I straddle the fence on peel vs unpeel and like to peel it only halfway, in a striped fashion; this also is more colorful, but it’s not recommended if the eggplant skin is thick. 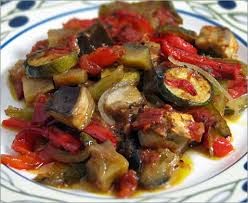 Before you start cooking, scald the tomatoes to peel them, then remove the seeds and cut them up into large pieces.  You can blanch the peppers so they’re more digestible, if this is a concern, but always remove all the seeds and membrane, then slice them and cut the slices in half lengthwise.  Scrub the eggplant and zucchini.  Half peel the eggplant lengthwise so that one stripe is white and the next purple, then cut it into large chunks.  Cut the zucchini into slices about as thick as the eggplant.
Now for the cooking.
- Slice the onion thinly.  Cook it, stirring at regular intervals, until it’s translucent but not browned.  Remember:  ratatouille should be a stew, not a fry-up.
When the onion is almost cooked, add the peeled garlic (either whole or pressed) and cook for about 2 more minutes.  Put these ingredients into a large bowl while you cook the other vegetables.
- Using the same olive oil, cook the eggplant about 2 minutes, then add the zucchini and cook another 3 minutes.  Strain off the olive oil, which you can save to make a deliciously flavored vinaigrette.  Put the eggplant and zucchini in the bowl with the onion and garlic.
- Finally, add a few drops of olive oil to the skillet and cook the tomato and the bell pepper for about 5 minutes.
- Put all the vegetables back in the skillet.  Add the thyme and bay leaf.  Salt and pepper to taste.  Turn the heat down low and cook covered for 10 minutes.  Then remove the cover and turn up the heat a bit, basting with the juices several times.  Be very careful here not to scorch the vegetables in the pan.  When only a few tablespoons of the juice is left, you’re done.

If you reheat your ratatouille, do it over very low heat.
Some recipes that specifically call themselves rataouille niçoise list fennel among the ingredients.  If you choose to do this, then use 1 head of fennel and cook it with all the other vegetables.  Some cooks just add a touch of fennel seed after they’ve cooked up the vegetables.
If you really don’t have the time (or the inclination), I guess you could drain a can of peeled tomatoes and just stew all the vegetables together, once the onion is cooked.  It won’t be as good, but it’ll still make a tasty change from the usual accompaniments.

(The photo of the ingredients is mine.  Being short a zucchini, I couldn't cook my own this time so had to rely on a photo from totalwellcoach.com.)