Recipe of the Month: Moules Marinières 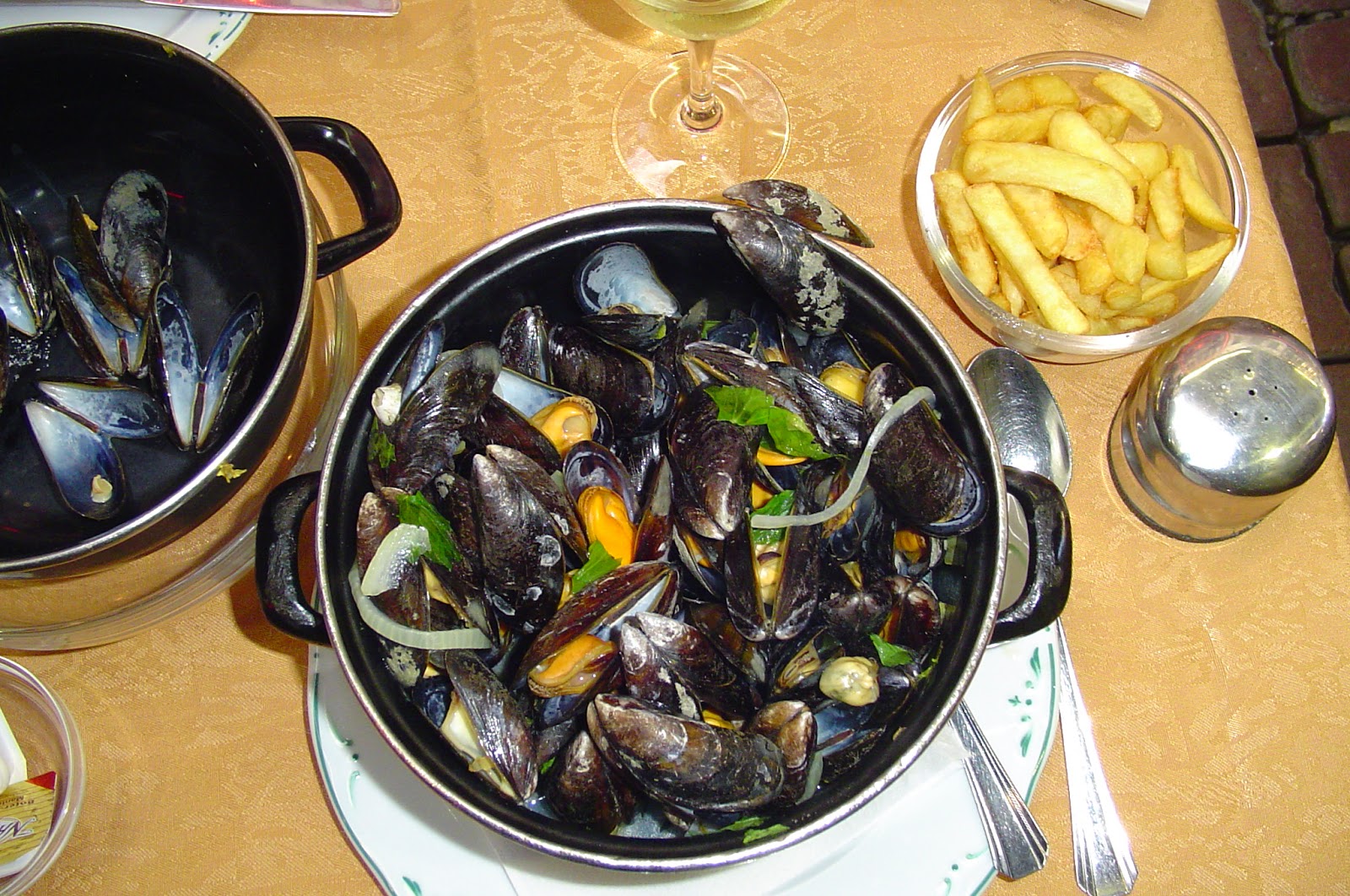 Summer’s over and September is here, the first of the months with an “r” ... Yes, that’s for oysters, but it holds true for any shellfish.  Eating oysters only in months with an “r” in them is an idea left over from the days of poor refrigeration, when you could take your life in your hands by eating something capable of spoiling so drastically in such a short time when temperatures soar.  Muscles are great on a hot summer day at the beach, but mussels... not so much.
(I'm told it's also a question of the months without an "r" being the months when oysters and other shellfish procreate... such as their procreation is.)
Mention moules and people tend to think Belgium.  But mussels are actually a favorite dish all along the French coast and even far inland, where the Léon de Bruxelles franchise offers Parisian diners a wonderful alternative to other fast food joints.  AND the mussels even come with fries!
There are many moules recipes.  The Belgians cook theirs with onion, white wine and celery.  For moules à la crème, add rich thick crème fraîche to the broth, or even curry!  One recipe I discovered years ago in a little guinguette on the Seine River downstream from Paris was moules catalanes, from the Barcelona coast, and it called for a lot of finely chopped garlic, a dash of tabasco and a bit of tomato paste in addition to the white wine.  But moules marinières is what you find the most often in France.  And it’s dead easy.
Mussels seem to be sold by the pound in America.  Count about 1 to 1½ pound per person, which isn’t too much if you consider that the shell is the heaviest part of the mussel.  On the coast you may find them sold by the quart; one quart usually weighs 1 1/4 pound.
You don’t need to add salt to this recipe because mussels are salt-water shellfish and they come by their salt naturally.
When the moules are served, pick a small mussel shell to use as pinchers to eat the rest.  You won’t burn your fingers in the hot broth and everyone will think you’re a real pro. 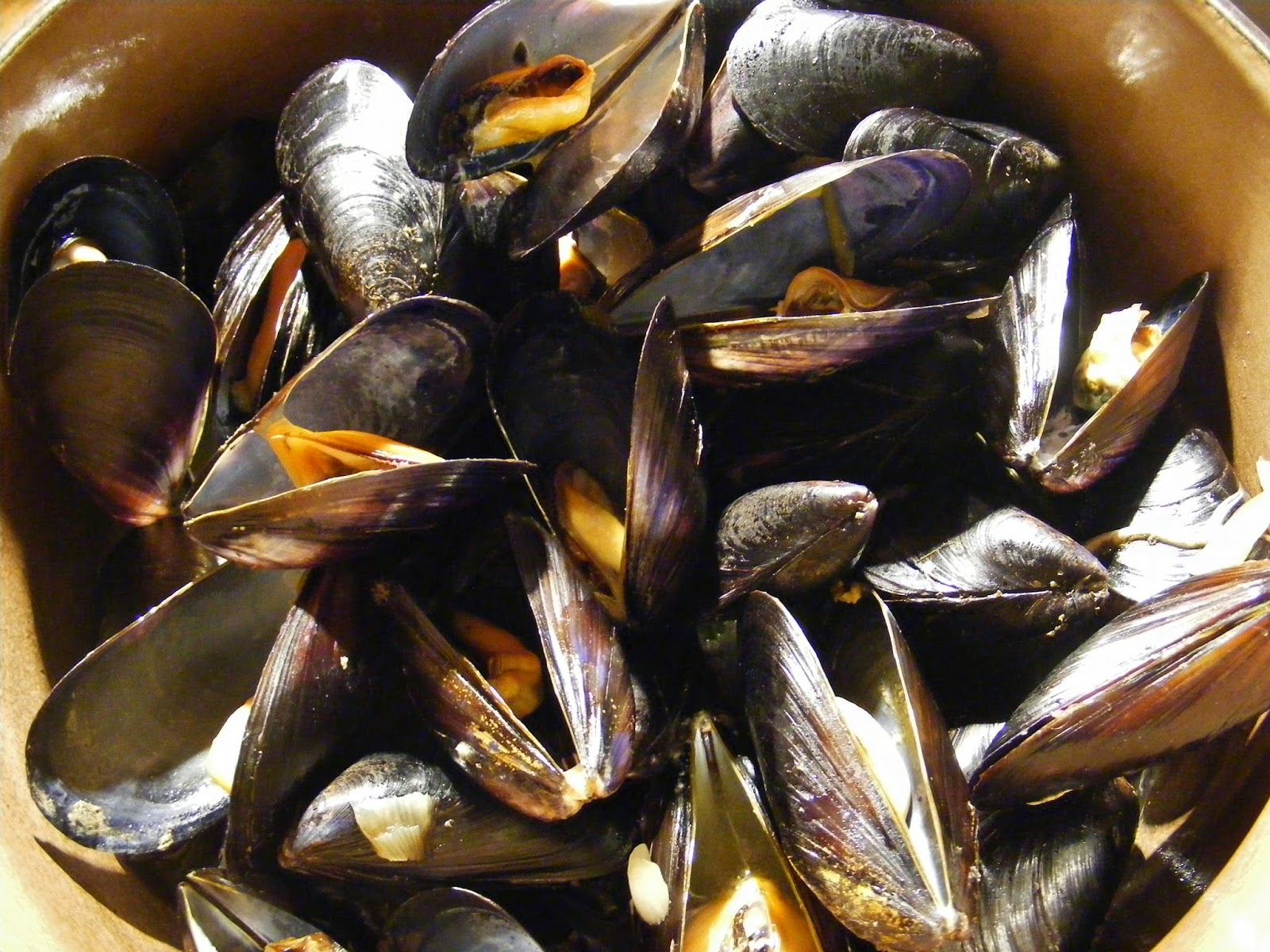 First and foremost, if you find any shells that are open, prick the mussel inside with a sharp knife.  If the mussel is still alive, the shell will close; if it doesn’t move, it’s dead and you need to throw it out.  Seriously.
Most mussels now come cleaned, but if not, simply scrub them with a vegetable or nail brush to remove any dirt.  If there are any barnacles on the shell just scrape them off with a knife, along with any seaweed “beard”.  Usually just rinsing the mussels well in cold water and rubbing them against each other is enough to clean them.  You may get a tiny bit of sand at the bottom of the broth once the mussels are cooked, but you can strain that off.  Some American cookbooks tell you to soak the mussels so they open and lose their sand, but then you lose that saltwater taste.  They won’t lose that much sand anyway, and any sand that is left you can strain off from the broth once they’re cooked.

- Mince the shallots.
- Put the cleaned mussels in a large pot with the white wine to create some steam.
- Add the shallots and the sprigs of parsley.
- Cover tightly and cook over high heat for about 5 minutes, shaking frequently without opening the pot so that all the mussels steam open.
- Put the cooked mussels in a large serving bowl, strain the broth, stir in the butter, and pour it over the mussels.
- Sprinkle with some chopped parsley and freshly ground pepper.
- Serve with French fries on the side - or some other type of potatoes.  Provide a large side bowl for the empty shells and a soup spoon for the delicious broth.  And some good hot French bread for dunking.

Goes perfectly with a dry Grave or a Muscadet, but my personal favorite is a Pouilly-Fumé.  All whites, of course.