The Saga of the Seagulls 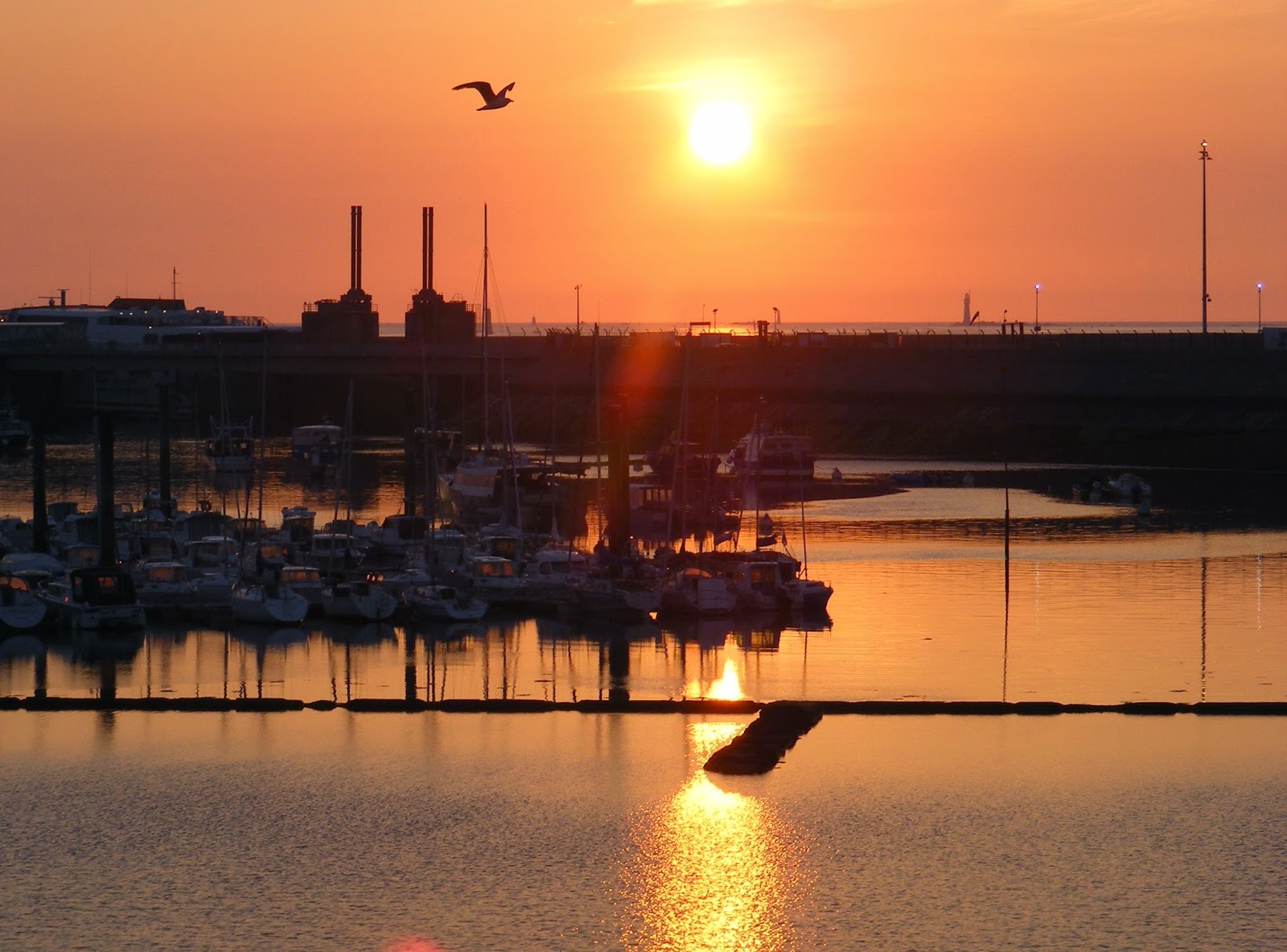 After two different ferries from Weymouth to Saint Malo via the islands of Guernsey and Jersey, a trip requiring the greater part of daylight, I arrive back in France just in time to miss the last train out... to anywhere.  So I’m booked into the hotel right across from the station, poised for an early train in the morning to get back to Paris. 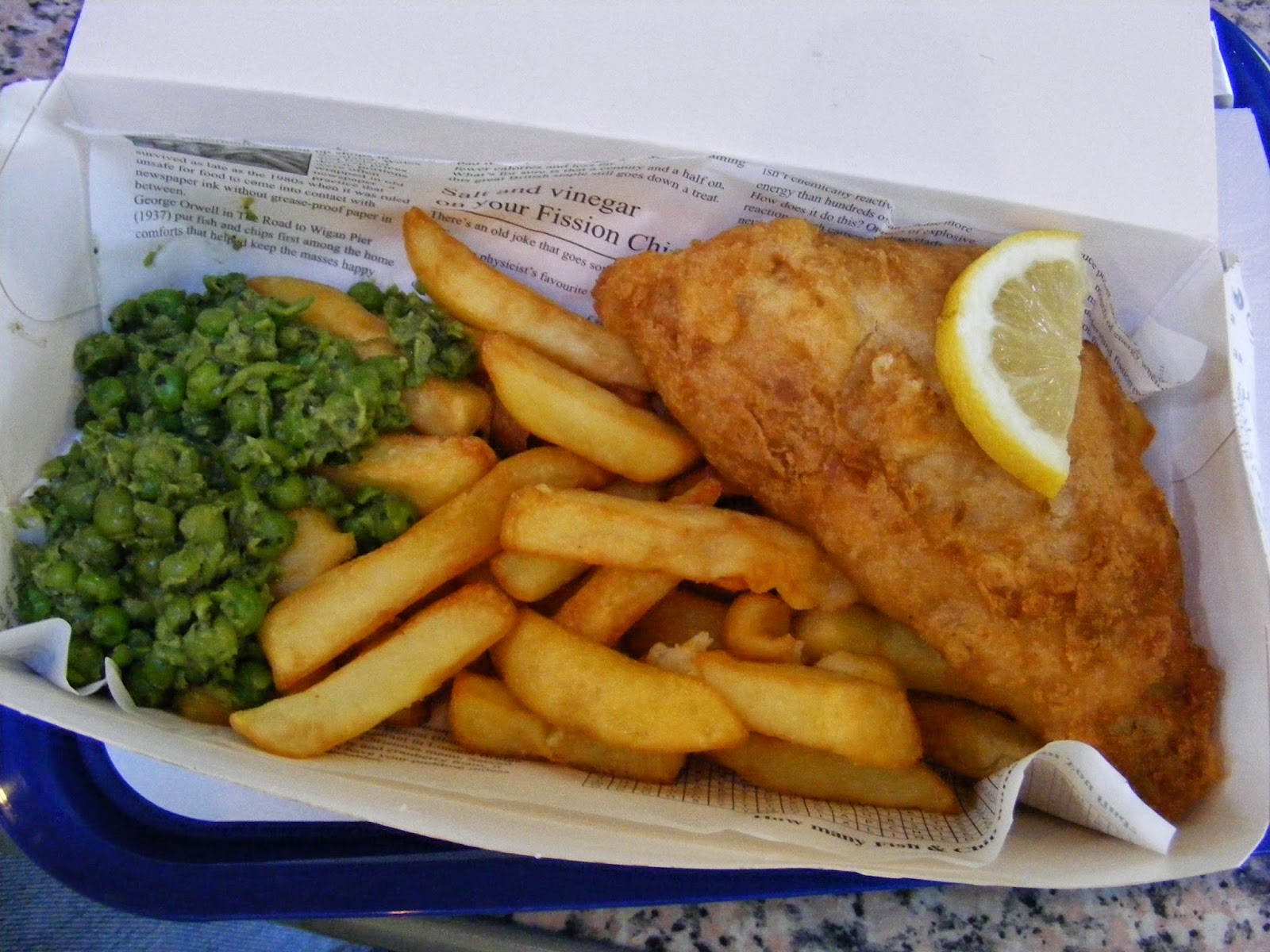 Having had a dinner of fish ‘n’ chips with mushy peas on the last ferry, I’m ripe for a shower and then bed.  The hot water feels good but I can’t help but wonder what all the seagull noise is about.  I mean, we’re on the ocean, okay, I got that.  But this is industrial strength gull-ness.  They seem to be circling the hotel.
I lie down in bed to watch something on TV when all of the sudden I see a shadow run past on the terrace just outside my open French door (pun not intended).  As I’m four flights up - and naked (remember the shower?) - that seems both incredible and unsettling.  So I slip into something comfortable and go look outside.
Nothing.
Except for a gull perched on the roof one flight up, keeping an eye on me.  So I go back inside and lie back down on the bed.
After about five minutes, I catch a glimpse of something scurrying by again on the terrace.  I rush over just in time to see a little ball of grey feathers scurry back past and disappear around the divider between my room and the room next door.
In spite of the seagull, who has flown down from the roof and is now perched on the railing next door, I peek around the divider to discover... that the ball of feathers is a baby seagull.  The adult is obviously the mother or father, and is quite distraught that I’m anywhere near her/his fluffy progeny. 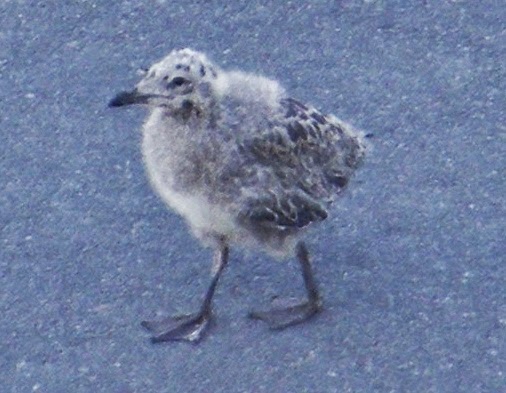 Obviously, this baby has fallen out of a nest up on the roof.  Or failed to get any farther in its first flight than one story down.  And now has no way of getting back to the nest.
A man in the building next door is also watching.  He can’t see the baby from where he is, but complains about all the noise.  He tells me it’s been going on for two days already.  I tell him about the baby gull, and he says “that would explain it”, then goes back to the World Cup on TV.

I decide that it’ll be hard to sleep with all this going on, and I’m severely in need of sleep.  Also that there’s no way the baby is going to learn to fly to safety before it starves to death.
So I go downstairs to the front desk to report that there’s a baby seagull on the terrace and it needs to be rescued.
The night clerk, who was so welcoming when I arrived, looks at me as if I’ve sprouted a second head.  He asks me if it’s a mouette or a goéland*.  Not knowing the difference (there really isn’t any), I tell him it’s too little to tell but that the parent bird has grey wings and a yellow beak, if that helps.
After a moment’s hesitation, he asks me what he should do about it.  I give the standard answer, which any cat owner living near trees knows well: “You could call the firemen.”
He does.  And they tell him they don’t do seagulls.  That he should call a veterinarian.  And they give him a number.
The night clerk gets an answering machine that tells him to call the vétérinaire de garde, the vet who’s “it” during off-hours (and we’re Sunday night!).  When he gets the vétérinaire de garde, she tells him she doesn’t do seagulls and to call the police.  And promptly hangs up.
Although neither of us believes that the police in a port city on a Sunday night - and during the World Cup to boot - will come to rescue a baby seagull, he calls nonetheless.  And I chicken out, slipping into the elevator as he explains about the rooftop nest and the baby and the... The elevator doors close and soon I’m back in my bed.

About a quarter of an hour later, someone knocks at my door.
I throw my Comfortables back on and open the door, to find... a very large policeman.
“Where’s the seagull?” he asks, curtly.
I usher him to the terrace, where there is neither seagull on the railing nor grey ball of feathers in sight.
“It runs back and forth between the terraces of the rooms,” I apologize.
He turns without a word and leaves the room, joining his two burly colleagues left in the hall.  I guess seagulls are not usually part of his job profile. 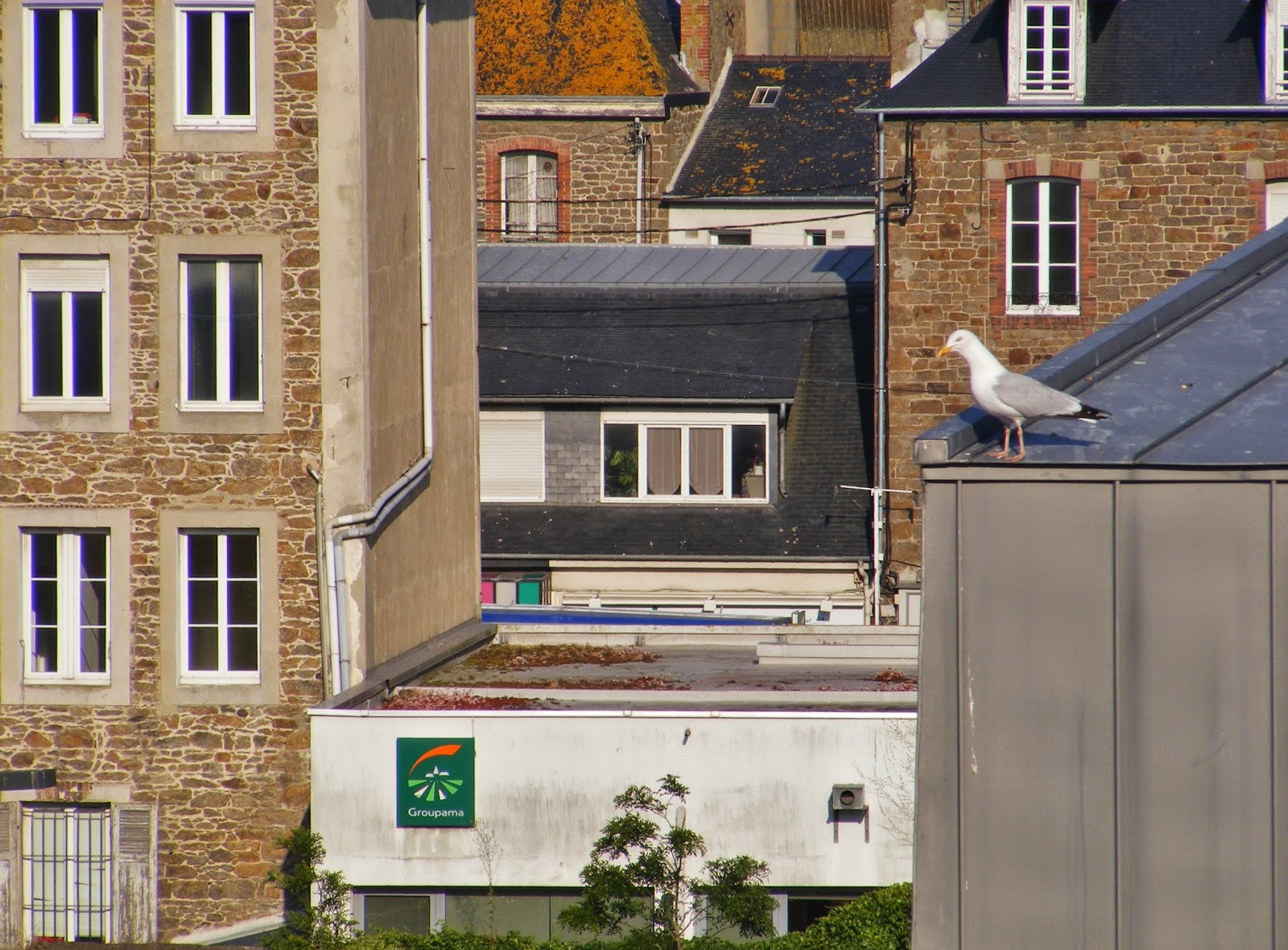 Minutes later I hear a lot of gull cries and raised voices. And see flashlight beams, given that the sun has set since all this started.  I peek around the divider to see police posted on the farthest terrace... and the ball of grey feathers headed my way, until it sees me.  I put the chair by the opening, to discourage it, and decide it’s best I just watch my program and leave the police to it.

After about 15 minutes, everything seems to settle down.  Being curious by nature, I head back down to the front desk.
Only to learn that there was not one baby but two.  The police have “arrested” them.  And released them in the lot behind the restaurant.  Impossible to see them in the dark, so I commend the night clerk for finding a solution, say I hope he doesn’t hate me for all the disturbance and go back to bed. 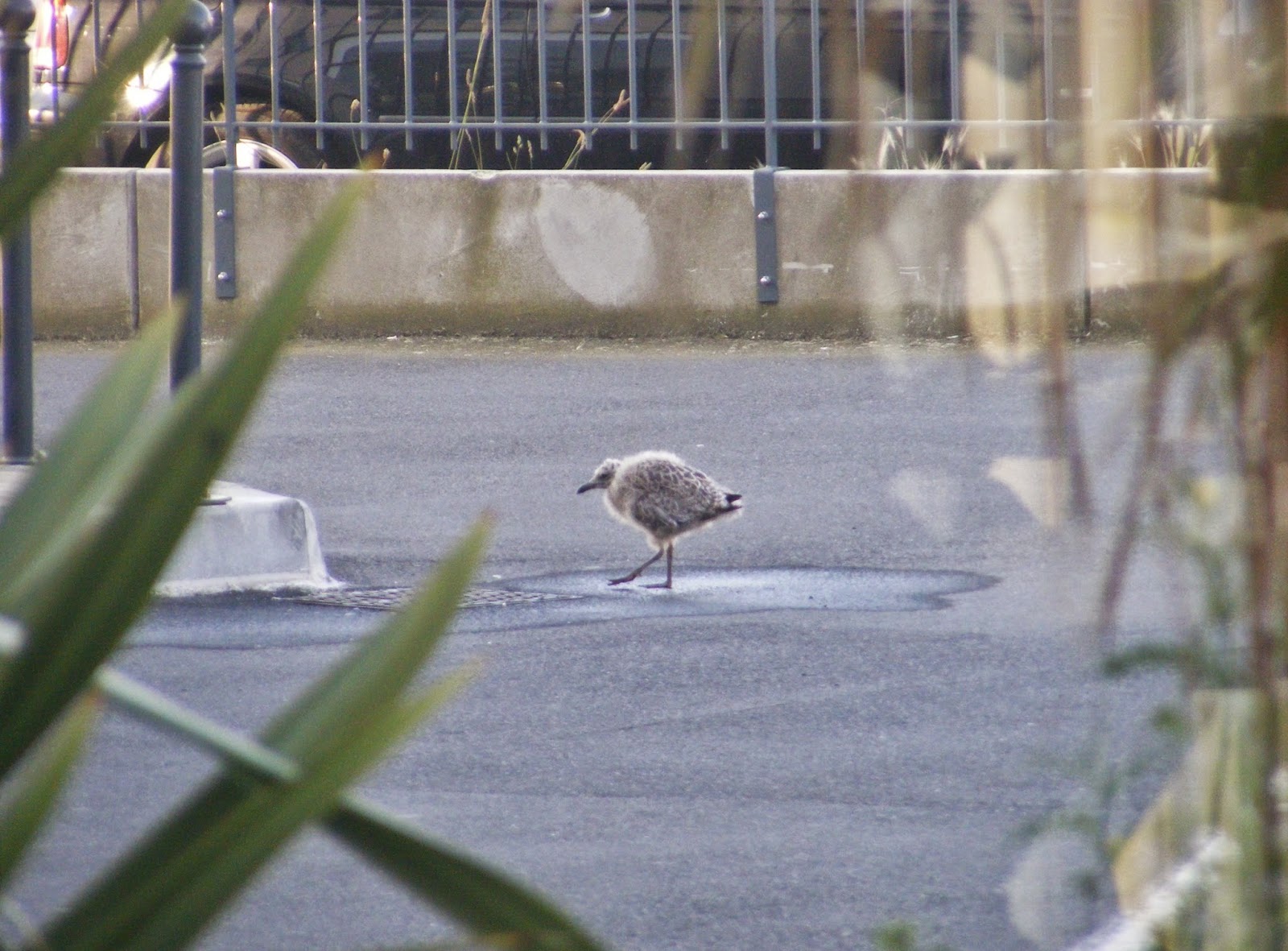 The next morning, over breakfast, I watch the two babies drink from a puddle outside and scurry back and forth, this time on firm ground. The parents are still perched up on the heights, keeping a watchful eye.  Where they stay until I check out.
That’s the end of my story.  So you’ll just have to write your own dénouement.  I know I have.


* Goéland is the French approximation for the Breton dialect’s “gwelan”, which means to cry (as in weeping).  The Bretons felt that seagulls were crying.  Mouette comes from the word “mawe”, plus the diminutive -ette, its origin being from Normandy, the province next to Brittany.  It again describes the mewing sound the gulls make. 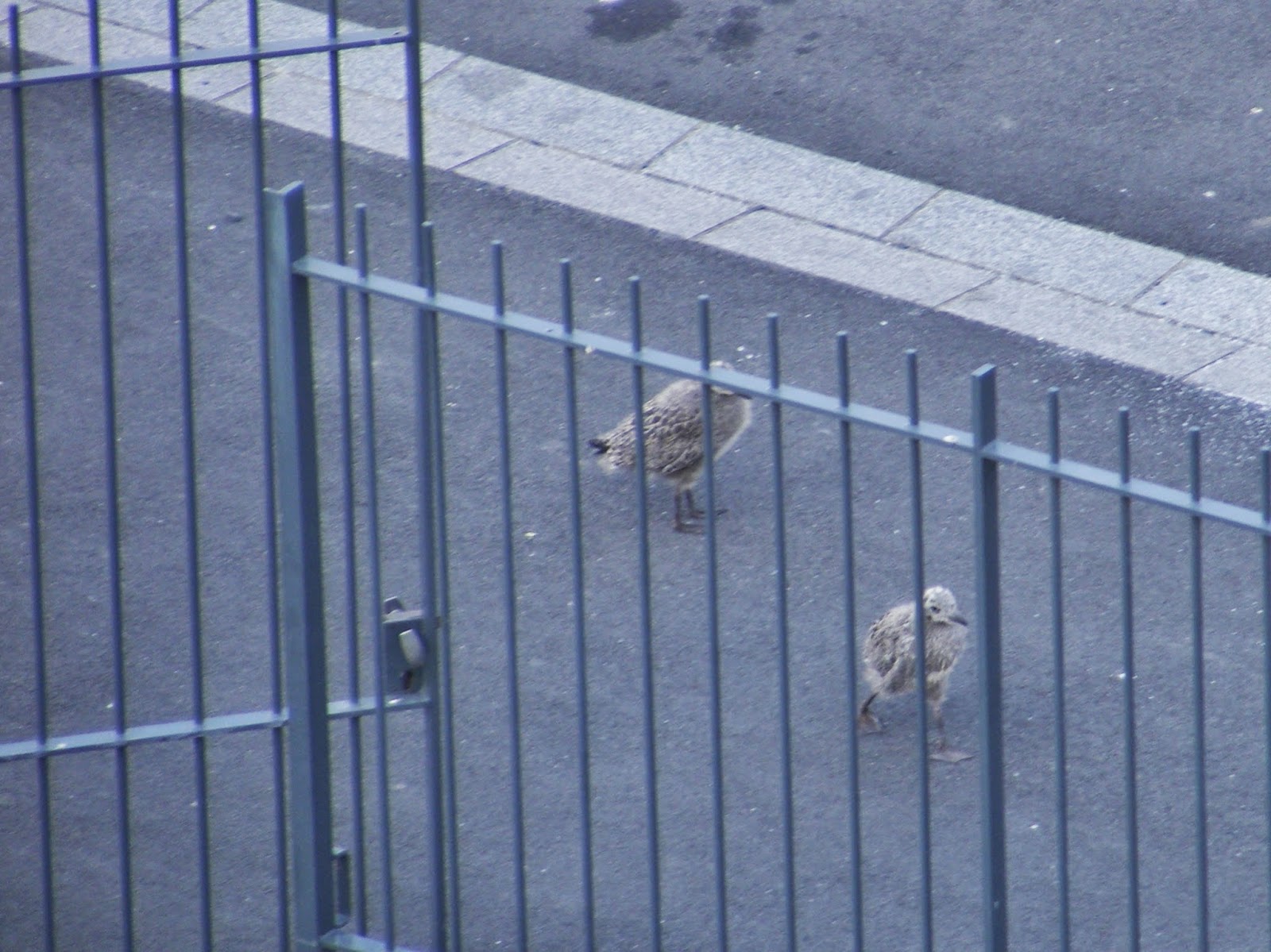