Recipe of the Month: Gratin d'endive 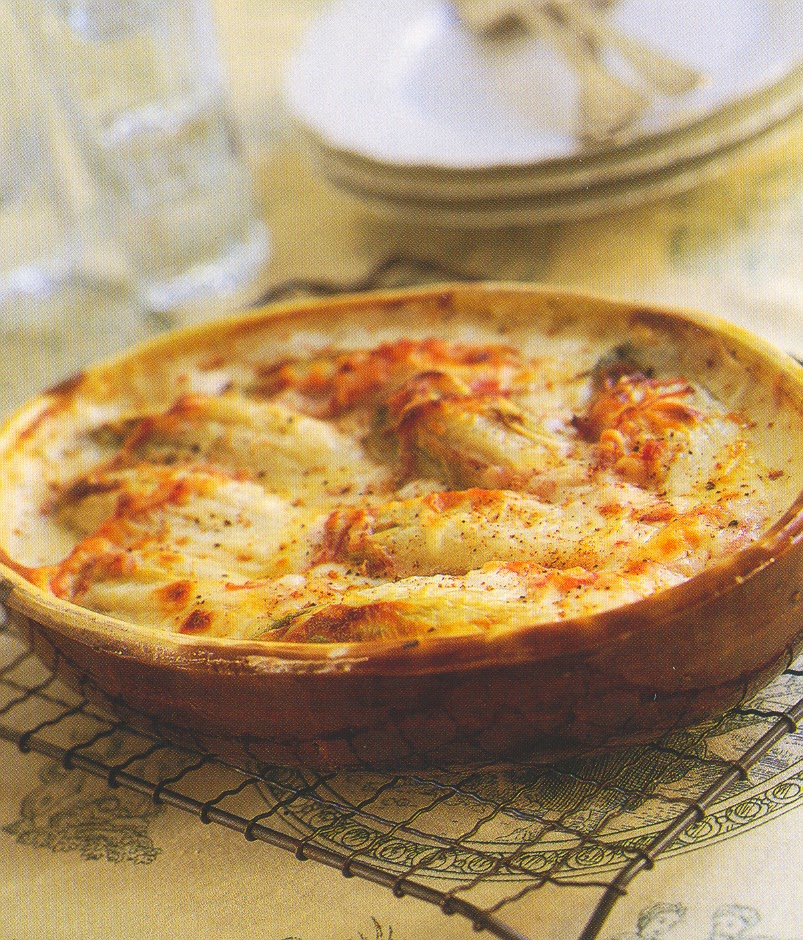 Here in Paris it’s usually not as cold as in many parts of the U.S.  This has always amazed me, because on the map Paris is at the same latitude as Labrador, Canada. And yet the temperature rarely drops below freezing for long and snow is rare, thanks to the Gulf Stream which crosses the Atlantic and flows into the English Channel. That makes the climate milder.  On my first trip across the Channel to England, I was amazed to see the grass was still green at Christmas!
Nevertheless, it rains a lot and the sun hides most of the winter.  That can chill you to the bone.  So winter often means “comfort food”, at least in the north of France.
And yet... with all the excesses of the holiday season, and anxious to lose those added pounds you picked up (more the ladies than the gentlemen, but still...), I’ve chosen a winter dish that is low in calories as well as being inexpensive.  What more could you ask for, post-Santa?

P.S.  On a culinary note, although the word "endive" exists in both French and English, the French endive used in this recipe is generally called Belgian endive in English.  (Have I lost you yet?)  It's a member of the chicory family.  In fact, in the U.K. it is commonly called chicory when you find it on the markets.  The Dutch appropriately call it witloof  (or witlof), which means white leaf, perhaps as they don't want to be caught up in the attribution of a nationality to it.  After all, French fries are actually Belgian, so...


- Preheat the oven to 375°F.
- Wash the endives.  The white base of the endive is what makes it bitter, so you want to cut off just that part.  Take too much off and the endive will fall apart.
- Melt the butter over low heat so that it doesn’t color.  As soon as it starts to bubble, take the pan off the burner and whisk in the flour, salt, nutmeg and Cayenne pepper.  Stir until it thickens.
- Put the saucepan back on the burner and slowly pour in the milk, whisking constantly.  (Whole milk preferably, or else 2%, but NOT skimmed, as it could make the taste too “thin”.)  Turn the burner way down and continue to stir until there are no lumps.  Let simmer for 15 minutes, stirring regularly.  It’s done when it’s thick enough to coat the back of a spoon.
- Add in the parmesan and continue to simmer for 2 or 3 minutes until the cheese melts into the mixture.  Give it one last stir to make sure the cheese is evenly distributed, then take it off the burner.
- Butter the bottom and sides of an attractive deep baking dish big enough to hold all eight endives in one layer.  (An attractive one so it can go directly onto the table.)  Arrange the endives in the dish and drape the ham over them.  (Another way is to wrap each endive in a slice of ham, provided the slices are large enough or the endives skinny enough.)  Pour the sauce over the top and add a few little dabs of butter on top.  Then sprinkle the cheese shavings evenly over the whole thing.
- Put the dish into the oven for 25-30 minutes until the top becomes lightly browned.  Check that the endives are tender by sticking them with a knife.
- Grind some fresh pepper over the top and serve in its dish while it’s piping hot.

If you want to enjoy a glass of wine with this, try a crisp white wine, such as a côtes du jura or a riesling.

Obviously this dish will be much more delicious if you work from scratch, grating the nutmeg and parmesan yourself and using the more expensive types of ham.  But you can also make it with packaged sliced cooked ham and pre-grated Parmesan if you’re strapped for time and short on cash. It’s still a very tasty all-in-one meal that children just may like if you tell them it’s basically cheese and ham.  With the endive being white, they may not even notice it's a vegetable.