Food gardens on both sides of The Pond 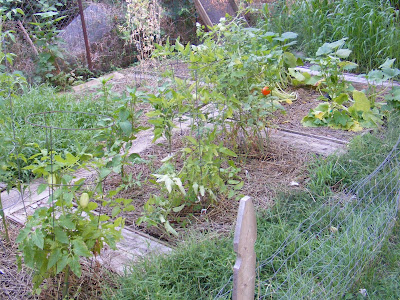 I just got back from a week visiting friends in The Thumb (look up Michigan on a map and you’ll figure it out all by yourselves... and feel really smart). A tour of my vegetable garden revealed what I’ve never been able to grow before: zucchini. 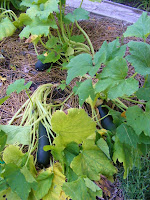 ﻿     Yes, I know zucchini supposedly grows all by itself. I’ve heard the Garrison Keillor routine. But I never managed to grow any. I’d get flowers, but either no zucchini would grow, or the critters would get to it first. I guess my karma must have changed.
So I cooked myself up a vegetable dinner of zucchini and bell pepper from the garden and flavored with herbs from my herb garden: rosemary, marjoram, coriander, chives. It was delicious! And tasted even better because no shopping bags were harmed in the making of the meal.

But where's the Paris connection, you ask?
Well, I grow things in Paris as well, having been fortunate enough to find a small apartment - once an artist’s studio - with an equally small garden at the back of a courtyard in Montmartre. Much of it is a shade garden, given the three-story tall cherry laurel tree just within the gate to my kingdom. (Queendom?) But parts of my realm still manage to get sun, at least in summer, and I’ve put those parts to culinary use.
For two summers, I bought green pepper and cherry tomato plants. I bought them already with some blossoms because I was only there for a month at a time. The peppers I got to eat... usually the night before I flew back to the States, and even though they were still pretty tiny. The tomatoes, however, were another matter. Because there was a merle chanteur in residence in the tree, the bird the Beatles immortalized in "Blackbird".
Now I love that bird. It kept me company all those sleepless nights when I grieved the death of someone very precious to me. The merle is the first bird to sing in the morning, even before the sun comes up, and it sings later than all the others, long after the sun has set. Its song is never the same; I'm sure it makes it up as it goes along. And if there are several in the neighborhood, they have conversations. I imagine them asking "what are you gonna do today?" ... "I think I’m gonna fly over to that park with the pond. You know the one?" ... "Oh yeah, they have good things there."
But one of their conversations was obviously about my cherry tomatoes being there for the picking. I’d nurse them along, watering, weeding, waiting until they were really red. Then one day telling myself it would be perfect in the evening. But when I looked out, it would be missing. I might even find some seeds. Or that green topknot that attaches the fruit to the vine. But the tomato was long gone. And then one day, I caught him in the act, fluttering down, grabbing it in his beak and jerking it off the stem, then flying back to the safety of a branch out of my reach to enjoy it greedily.
I don’t grow cherries any more. Not in Paris. 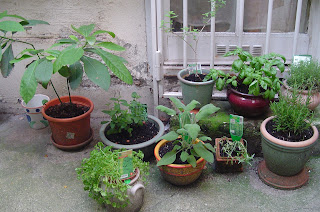 The key part of my French "garden" grows in colorful pots on my doorstep. It’s my kitchen herb garden.
In the winter, some of it comes inside - especially the basil - and the rest just toughs it out in the mild Parisian winter. (Except last year’s, a particularly Michiganesque, below-freezing winter that killed all but the mint and the bay leaf.) I water the herbs tenderly while I’m in residence. When I’m gone, they’re watered by the Heavens and a few kind neighbors. Whatever doesn’t make it on its own is replaced the next spring. It’s such a pleasure to step out of my door and just snip off what I need. And I need quite a variety: basil, thyme, rosemary, bay leaf, parsley, tarragon, chives, mint, verbena... 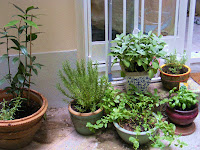 Fresh herbs are the very essence of French cuisine. And they follow me in my travels. Or rather they wait for me patiently, with fragrant, open arms.

To hear a merle chanteur:
www.youtube.com/watch?v=_5qZjupCzlw


To hear the Beatles "Blackbird" with my merle chanteur: