Recipe of the month: Céleri rémoulade 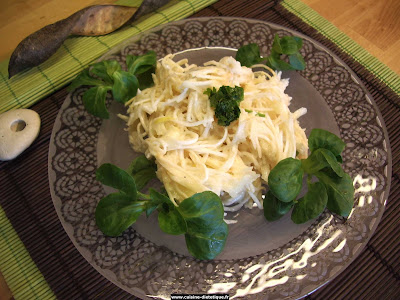 Before I went to France, I thought there was only one type of celery: the long, stringy, light green kind with small leaves at the ends of its branches. So the first time I ate céleri rémoulade, I wondered why it didn’t taste familiar. But I liked what I tasted, which is strange because I don’t really like mayonnaise and the rémoulade sauce is very much like mayonnaise.
A long time afterward, I found out why it didn’t taste like celery. Because it wasn’t! It was celeriac, which is a whole other animal... or at least a whole other variety of celery. Its other names in English are knob celery and more often celery root, although that’s misleading even though it is a root vegetable and it is in the celery family.

﻿     Celeriac looks kind of like a nubbly turnip with a bad complexion and a green topknot. Not the most attractive vegetable in the market. A strange, almost prehistoric looking thing in fact. But in spite of that, céleri rémoulade is one of the classics of delis, bistros and school lunchrooms alike. A sort of grated carrots but white, and with a different sauce.
It can be rather crunchy, almost tough, so some people like to blanch it in boiling water for a minute beforehand. If you julienne it up thin enough, that probably isn’t necessary. Try both ways to find out which you prefer.
On the Mediterranean coast, they often add a few drops of anchovy oil, which you can recycle when you open a can or jar of anchovies.
This is a starter that’s better when made a bit ahead. Thanks to the lemon juice, it shouldn’t discolor or turn. And it’s a good change from cole slaw for the picnic days of July.

- Peel the celeriac, removing any eyes, then cut into thin julienne strips. You can use the large holes of your grater to go faster, or the adequate fixture on your food processor to go even faster. Put the celeriac into a bowl and sprinkle with ½ t of salt and ½ c lemon juice. Toss well and let sit for 15 minutes. Rinse, drain and pat dry.
- While the celeriac is resting, make the rémoulade sauce by blending together the mustard, ½ t of salt and a good pinch of freshly ground pepper (white will look better, but black is also fine). Very gradually beat in the oil as for a mayonnaise until it is creamy. Lastly blend in 1 T of lemon juice. This can go fast with a food processor or mixer, otherwise use a metal whisk and good biceps.
- Mix the celeriac and the sauce together well and put into the refrigerator (min 15 minutes but you can cover it and leave it to macerate overnight as well).
- Just before serving, sprinkle with chopped green herbs: 1 T fresh chervil, parsley, and/or tarragon (or 1/4 t if dried herbs).