Out and About: Exhibits

The much over-looked Berthe Morisot 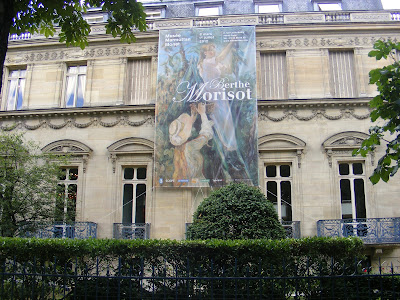 In Paris, there’s a partially undeclared war between the Musée d’Orsay and the Musée Marmottan. And it’s all Monet’s fault.
Orsay has all the spotlights on it, and it’s right there in the middle of town, across the river from the Louvre. The much smaller Marmottan, on the other hand, is barely inside Paris, on its very western edge, and not right at a métro stop even. So to make the point that they have Monets too, they’ve changed their name to Musée Marmottan Monet. 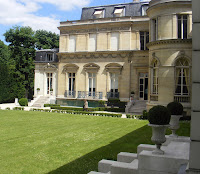 Their permanent exhibit, built around the personal collection of Paul Marmotan as well as gifts from different donors, includes illuminations from the Middle Ages and Renaissance as well as works from the First Empire. But the main attraction is its works by Claude Monet, and with the huge donation made by the artist’s younger brother Michel in 1966, this became the largest Monet collection in the world.

And all this showcased in a magnificent mansion that was once a duke’s hunting lodge.

But as amazing as all that is, that wasn’t why I took three different métro lines to come here. The Marmottan is hosting a show of the works of Berthe Morisot, and thanks to her descendants’ generosity, this museum is now the proud owner of 81 of her pieces: oils, watercolors, pastels, drawings and even her sketchbooks. It’s the first retrospective show of her genius since well before my birth.
﻿
Morisot was one of three children, all of whom were given art lessons at a young age, maybe because they were descended from the Rococo painter Fragonard. Her brother moved on to other interests but Berthe and her sister Edma continued and became quite talented artists. Edma eventually got married, as women tend to do, had children and closeted her natural gift away in mothballs. Berthe did not. Even after her marriage to Impressionist Edouard Manet’s brother Eugene at the old-maidenly age of 33, she continued to paint, her favorite model being their daughter Julie. And she kept her own name as well, signing - as before - Berthe Morisot.
But long before her marriage, Morisot had already been in the thick of things Impressionist. By the age of 20, she was being taught by Camille Corot, especially in plein air (outdoor) painting. That gave her a good preparation in the transposition of light, which was the principle behind Impressionism. Her paintings were first accepted by the Salon de Paris when she was only 23 and from then on her name was on the lips of all her contemporaries. She was the only woman artist at the first Impressionist show in 1874, her works hanging alongside those of Monet, Renoir, Pissarro, Degas and Sisley. Pretty good company, for a girl!
Manet took a keen interest in her talents and a long and friendly collaboration ensued, all of which is well-documented. Some say he was the teacher and she the student, but there seems to be quite a lot of give and take when you read their correspondence. He painted a striking portrait of her in mourning when her father died... and more than ten others as well.
She was a woman living astride two worlds: the bourgeoisie into which she was born and the artist’s world in which she thrived. In her time, women led lives like Edma’s. If they dabbled in art, it was just that: dabbling. The only other woman I can think of who achieved as much was the American, Mary Cassatt.
Berthe Morisot died of pneumonia which she caught from her daughter while nursing her back to health. She was only 54.


The exhibit starts with the traditional exercise for the budding artist: copies of works by the masters. It includes a few works by Edma, including her portrait of Berthe. It moves on to what she is most known for: paintings of her family, including her headstrong maid Pasie. There are a few nudes, one the same as another of a shepherdess, but this one sans clothes, and then again what may be the same shepherdess wearing only a head scarf and sitting on a riverbank, which almost uses Renoir flesh colors.
The final landscapes take much from Monet, with whom she corresponded. They show she was moving on to a decomposition of color and light that is almost post-Impressionist and even abstract. Who knows what she would have painted if she had lived?
The exhibit included just one piece of sculpture: a bust of Julie - who else? - for which she is said to have gotten tips from Rodin himself, and there is indeed a Rodin cum Camille Claudel air about it.
My favorite of the entire exhibit was an oil of a young girl - maybe Julie - clutching her doll. It came from a private collection, as did many others, and it made the child look very vulnerable, her dark eyes staring into the void.
﻿﻿
﻿﻿    But for me, there was one missing - Le berceau (The Cradle). In card form, I sent it out to announce the birth of one of my children many years ago. I was told it’s hanging in the Musée d’Orsay. And as they have an exhibit of Degas nudes there right now, I think a visit is in order, don’t you?


I must admit that none of the photos of Morisot’s works are mine. That was not allowed, even though I did steal the one against the garden background. So I’ve borrowed the others off the Web.