Have you ever noticed how little everyday things can change from one country to another?

Take, for instance, the lowly toaster. Why is a toaster in France a different shape than a toaster in the States? 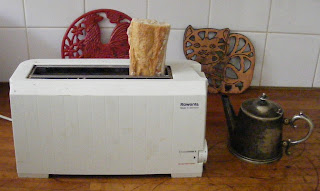 Well, what does a toaster do? It toasts things. Muffins, sure, but mostly bread. In America, there’s an expression: "the best thing since sliced bread". And a slice of bread in the U.S. has a certain form... and a certain thickness. So the generic American toaster is designed to accommodate such a slice of bread. Whereas in France they eat baguettes, those long, slender, thick, crusty things you see under many a Frenchman’s arm around mealtime. (Yes, yes, I know it’s a cliché, but it’s a true cliché and still is true today. Just ask anyone who’s traveled outside of Paris.) So the French toaster slit has to be deeper and wider than that of its American cousin. Otherwise part of your baguette will be sticking out of the top and not getting toasty, not to mention that it’ll get stuck inside when it should be popping out. Ergo, the French toaster is a different shape than the American toaster. CQFD - QED and etc. 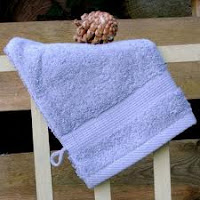 Another "everyday" thing that is different is the washcloth.
In America, a washcloth is a more-or-less square piece of terrycloth. In France it will still be made of terrycloth and it might be square, but it’s sewn up on three sides to create a gant de toilette, a wash glove. At first I thought that was strange, but I soon found it was very handy (pun intended) to slip it over your hand to wash with. More logical. And if nothing else, the French are definitely logical. Cartésien. Cartesian logic, of course, René Descartes being French after all.

Then there’s the business of traffic lanes. Especially those slow lanes on roads going uphill, the ones intended for slow-moving vehicles, trucks in particular.
On American highways, it’s usually the left lane that runs out. The fast lane. The passing lane. Those zippy cars have to slow down to merge in with the less rapid vehicles. The French do it the other way around on their expressways. It’s the right lane, the slow lane, that has to merge. The French logic is that the fast cars are zinging along and would be required to brake, whereas the slow cars lumbering along can just slip into traffic as they pick up speed downhill. Traveling slower, they will have an easier time of braking, if need be.
I found the rationale for this very confusing until I figured out the total thought process behind it and then it became obviously The More Logical Way. Maybe that means I’m getting too French.

All this to say that if you’re traveling outside of your native country, take a look around and see what’s recognizable but slightly different. And then try to figure out why. You can report back.