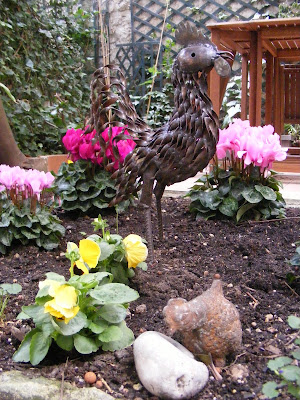 Once again I strap myself into the Air France plane for my third transatlantic flight of the year. I yearn for the days when you'll be able to cross your arms and give a nod, like in "I Dream of Jeannie" - or wiggle your nose like Samantha - and be transported wherever you want in the blink of an eye... although I am a bit afraid of ending up with my head on the body of a fly as in the movie of the same name.
Nonetheless, I’ve gotten to the point where I’d be willing to try. Eight hours is a long time cramped up in a winged box with hundreds of other people sneezing into the common air. Lord knows, Air France crews are a genteel and helpful lot, but when every single seat is taken and you’d dearly like to be able to "stretch out" over just two of the bloody things but you can’t because (see above), and then the person in front of you puts their seat back, almost knocking over the beverage on your dinner tray and making it impossible to see the movie you’d missed when it came to a theater near you... well, just about at that point time travel begins to looks like it would beat the pants off flying in what is so appropriately named an AirBus (not that Boeing is any roomier). They say these planes don’t offer less legroom than before, but I have a carry-on that used to fit under the seats and doesn’t any more. Somehow I don’t think it’s the carry-on that grew.

So here I am - finally! - walking down the street to my door.
Inside my white gates, the garden is a sad picture. The central garden is totally bare, with only the campanulas around the edge, and the two dwarf rosebushes, and one fuchsia in a sorry state. The other has died, as have all the impatiens that had made a carpet of white and pink.

A quick look around shows the containers bordering the walls have fared better, except for the fosythia and jasmine - totally wilted and very possibly dead. And the Indian paintbrushes, which will never paint anything ever again.
As for the windowboxes, the morning glories I planted are magnificent with blue flowers, although their background of yellowed leaves spoils the picture a bit. The nasturtiums are gangly and the daisies are practically daisy-less but their greenery looks fit. The lobelia looks blue in more than color, and only one seems to have survived. As for the geraniums and lavender, just call the undertaker. 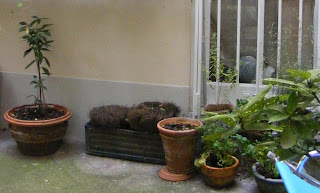 Amazingly, the herb garden on my front steps looks pretty good. The basil and sage have gone to meet their Maker, the thyme is totally dried and suitable now only for cooking, plus the mint and verbena look sad. The parsley, on the other hand, is magnificent and full, as is the rosemary. The bay leaf hasn’t grown as much as in the past, but it hasn’t given up the ghost either, which isn’t bad under the circumstances.
Because, you see, there has been precious little rain in Paris. It all seems to have fallen from the sky in June and July, leaving none for August. That, combined with 100°F temps for a few days in a row last week and the absence of my two neighbors who usually water when I’m away, have left plants with their little tongues hanging out.
Inside, on the other hand, the apartment is cool. And yet about half of the flowers are dead. They’ve gone almost a month without a drop of water. But that damage is soon repaired with a first trip to the florist. A new azalea, a second African violet and a brilliant red cyclamen for a splash of color where something whose corpse looks totally unfamiliar now slumps.

After considerable watering as soon as I set down my suitcases, and then again that evening - and then again the next morning - stock can be taken. "Bring out your dead," I think, echoes of the plague of the Middle Ages.
On close inspection, every single leaf on the forsythia I planted my first summer in this house is withered. But when I scratch one of its branches, the wood is still green underneath. Hopefully that means that it will re-flower in the spring. We’ll just have to wait and see. Nicole’s jasmine is a little harder to decode; it looks hopeless, but maybe there’s still a chance of a resurrection. It should be obvious by the time I leave, which is many weeks away. 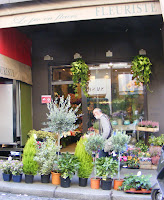 In my neighborhood, there were five florists, plus a shop that deals only in cut roses. One of the five (which used to be a lingerie shop - very profitable in the Pigalle area) caters to a clientele of Beautiful People, but it does sell herbs and plants other than The Usual Fare. The florists I usually go to are in the other direction, on or near the Rue Lepic. One is still closed for the holidays; another is closed permanently, which isn’t surprising as the owner was very kind but rather ditzy, not good casting in the role of The Shopkeeper. The huge surprise is the closing of the local Monceau Fleurs, a chain that once was buying up every small florist shop across France and even beyond. (I learn only a few days later that Monceau over-extended themselves and are in the process of going belly up.) All this leaves standing only the Oriental lady across from ex-Monceau and the Oriental couple at the foot of the street. (Do I see a pattern evolving?)
﻿ 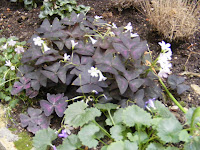 After several trips down the hill and back up, I’ve moved the dried-up lavender to the central garden for what garden planners call "interest", and potted fresh lavender in its place. I’ve also replanted the indoors azalea here in the hopes that more ground may help revive it; can’t do any harm, right? The impatiens have been replaced by five cyclamen: pink, red and white. Plus two purple shamrocks to keep company with the one poor scrawny survivor of both plaster-choking work on the building and the Arctic cold of last winter. By the gate, purple veronica rising from white-bordered greenery has replaced the dead Indian paintbrushes. And the bathroom windowbox is again colorful with kalanchoe. 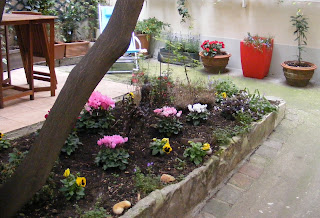 The next morning, the garden still seems dark and a bit sparse in the center so I take a chance that the Oriental couple are back now from vacation and open for business. Although they’re the farthest downhill, they’re also the least expensive. Sure enough, they have some pansies for only 1 euro a pop, so I stock up on one tray of ten and head back uphill. I set them out to see where to plant them for maximum effect. The bright yellow pops in the shadows of the cherry laurel tree above and brings the whole thing together. So in they go. 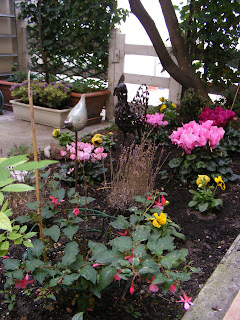 My garden is officially back in business.

Suffice to say I’m now on a virtual first name basis with the two florist shops that have endured, as Faulkner would say. The garden is still a bit sparse compared to what it was in the spring, but it will do for my purposes. We’ll see what winter will bring. Last year was a killer, with cold such as Paris rarely sees and crusty snow on several occasions. In late February an entire week went by with the thermometer never making it above freezing. Already, on the last night of August, it has snowed in the Southern Alps, but I’m told by the natives that it’s only on the summits, and that’s normal at this time of the year so it shouldn’t be taken as an omen of frigid things to come.
From their lips to God’s ear.
As for me? I’m sitting in the garden with a glass of wine and a good book. So... cheers!